Roberta Bruni broke her own Italian record in the women’s pole vault with 4.72m at the 58th edition of the Palio Citta della Quercia, a World Athletics Continental Tour Silver meeting, in Rovereto on Tuesday (30).

Bruni needed two attempts at her opening height of 4.23m before clearing 4.33m and 4.43m on her first attempts. She cleared 4.53m at her second attempt and 4.63m at her first try. The 28-year-old then vaulted 4.72m at the third time of asking, adding a centimetre to her previous Italian record set in Barletta in June and equalling Stacy Dragila's meeting record.

After finishing seventh at the European Championships with 4.55m, Bruni secured her spot in the Wanda Diamond League final with her fourth place in Lausanne with 4.60m and now sets her sights on Zurich.

"I bounced back from disappointment at the World Championships in Eugene where I did not get through the qualifying round," she said. "I owe this result to my coach Riccardo Balloni. I cannot celebrate now as my focus is on the Diamond League in Zurich."

Twanisha Terry won the women’s 100m in 11.02 (0.3m/s), equalling the meeting record held by Jamaica’s Christania Williams since 2016. Terry made a major breakthrough this season, winning world gold as part of the US 4x100m team in Oregon and improving her 100m PB to 10.82 in Memphis in July.

Kayla White placed second in 11.18, while Javianne Oliver completed the US sweep in 11.31.

"It means a lot for me to win today in front of fans," said Terry. "It has been a very long season for me. I am very happy with my results this year. I will end it in Padua next Sunday."

World and European Championships finalist Nick Ponzio won the men’s shot put with a throw of 21.22m in the fifth round. Roman Kokoshko from the Ukraine finished runner-up with 20.63m

"It was a very good competition," said the winner, who will compete in Brussels and then at the Diamond League final in Zurich. "I love Rovereto. I won at the Italian Championships (in Rovereto) last year. It means a lot for me to compete in front of Italian fans."

USA's world indoor bronze medallist Donald Scott won the men’s triple jump with 16.89m in the sixth round, beating European Championships fourth-place finisher Tobia Bocchi from Italy, who produced his best jump of 16.73m in the fourth round.

Serbia's 2017 European U20 champion Milica Gardasevic leapt 6.78m in the fourth round to take a narrow win in the women’s long jump over European bronze medallist Jazmin Sawyers, who leapt 6.73m in the fifth round. World silver medallist Ese Brume placed third with 6.53m.

Broadbell and Muhammad among winners in Lucerne

Jamaica’s Rasheed Broadbell continued his strong run of form to win the 110m hurdles at the Spitzen Leichtathletik meeting, a World Athletics Continental Tour Silver event, at the Allmend Stadium in Lucerne on Tuesday (30).

The 22-year-old followed his Commonwealth Games win in Birmingham with victories in Szekesfehervar and Lausanne, where he dipped under 13 seconds for the first time with 12.99m. Back racing in Switzerland in challenging conditions on Tuesday evening, Broadbell clocked 13.36 into a -2.2 headwind to triumph ahead of USA’s Eric Edwards and Jamal Britt in respective times of 13.53 and 13.54. Britt narrowly held off Jamaica’s Olympic champion Hansle Parchment, who ran the same time for fourth.

In the field events, USA’s world record-holder Ryan Crouser was a dominant winner of the shot put, continuing his return after having covid with a 22.08m win ahead of Tom Walsh with 21.21m, while USA’s Rudy Winkler led the hammer with a 77.78m performance.

China’s Xu Huiqin won the pole vault on countback ahead of Slovenia’s Tina Sutej, both athletes managing a best of 4.30m. 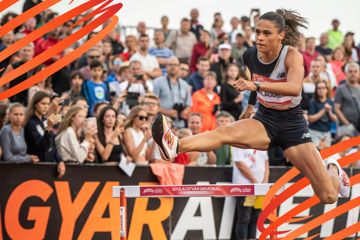 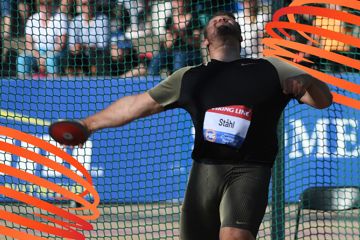 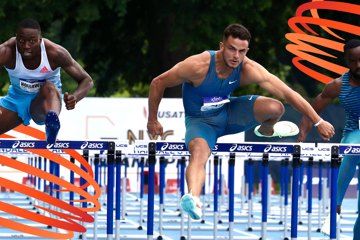 Allen pips Holloway and advances to No.3 all ...