The Kip Keino Classic – and, indeed, the 2021 World Athletics Continental Tour Gold series – ended on a high with some incredible performances at Nairobi’s Kasarani Stadium on Saturday (18).

In the closest finish of the day, the 100m duel between USA’s Trayvon Bromell and Kenya’s Ferdinand Omanyala produced two of the fastest performances in history in the short sprint as Bromell won in a world-leading 9.76 ahead of Omanyala’s African record of 9.77 (1.2m/s).

Bromell had a good start from the blocks and quickly opened a gap on the rest of the field before Omanyala began to close in on the US champion in the final stages. Bromell just held on for victory and improved his PB by 0.01, moving to equal sixth on the world all-time list, two places ahead of Omanyala.

“I may not have grabbed the gold in Tokyo, but given where I came from, I feel I’ve already won,” Bromell posted on social media after the race. “Five years ago I underwent surgery. 2017-19 I was at home watching track from the couch. Now it's 2021 and I’m the sixth fastest in history.”

Other than the 2009 World Championships final and 2012 Olympic final, this was the only other time in which two men have finished inside 9.80 – with legal wind – in a 100m race. It should be noted, however, that Nairobi’s altitude would have benefited the sprints events.

USA’s Olympic 100m silver medallist Fred Kerley made good use of the occasion to end his season with a 200m PB. The former 400m specialist came off the bend in first place then continued to pull ahead of Botswana’s Isaac Makwala, crossing the line in 19.76 (2.0m/s). Makwala took second place in 20.06 and Filippo Tortu, the anchor leg runner on Italy’s victorious Olympic 4x100m team, placed third in 20.11. 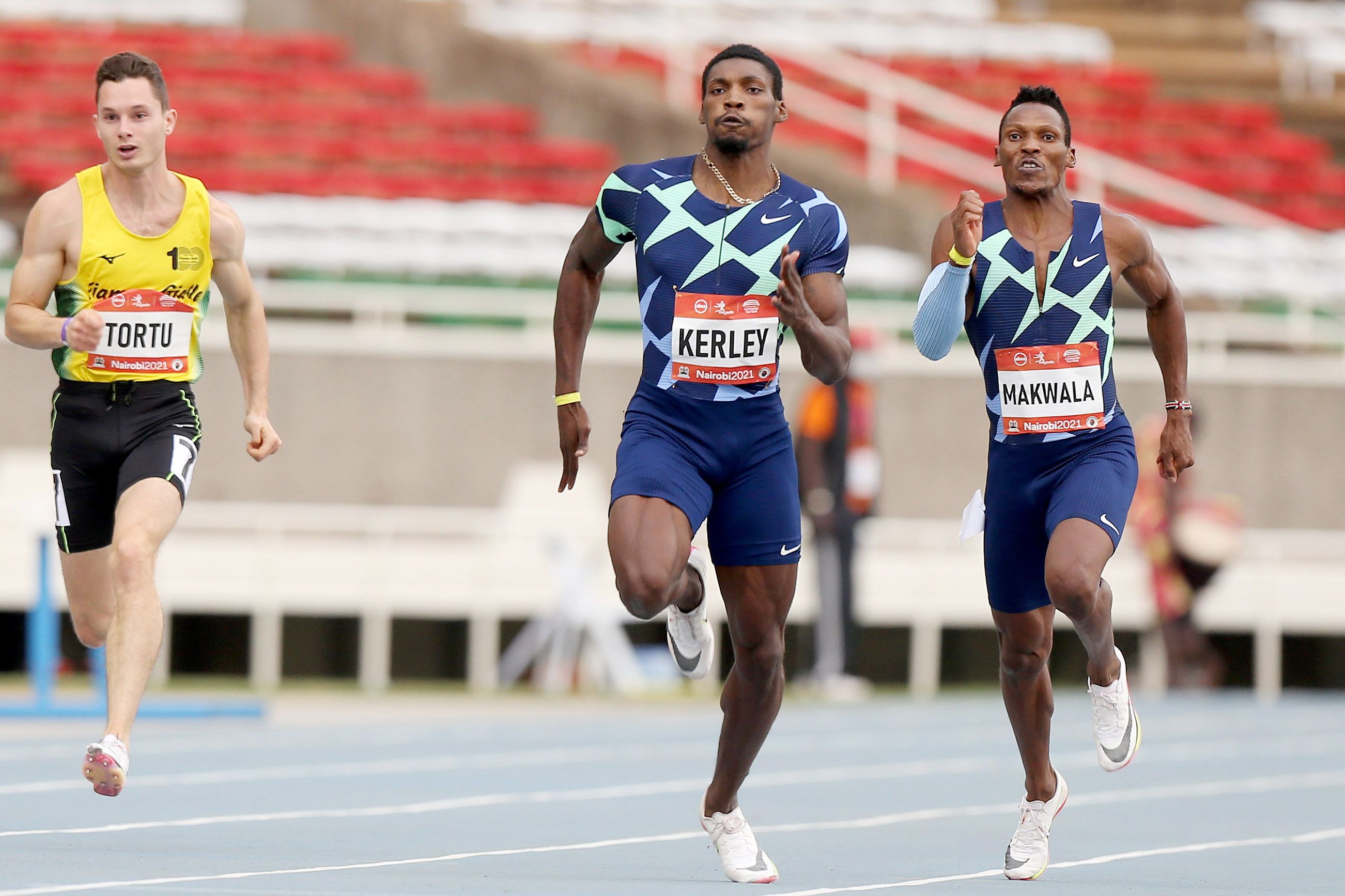 Three winners from the World U20 Championships that were held at the same venue last month emerged victorious again here as they ran against some of the world’s best senior athletes.

It took almost 20 minutes, and two false starts in between, for one of the most anticipated events of the programme to finally start; the women’s 200m between Marie-Josee Ta Lou of Ivory Coast and Namibia’s Christine Mboma, the Olympic silver medallist and world U20 champion.

Noah Kibet had earned the bronze medal at the World U20 Championships, but he surprised a high-quality senior 800m field with a bold move on the last lap that his competitors could not match. He won the race in 1:44.97 ahead of Collins Kipruto (1:45.68) and Cornelius Tuwei (1:45.90). Olympic silver medallist Ferguson Rotich was fourth.

From the celebrations Soufiane El Bakkali produced after winning the men’s steeplechase, it became clear that he really wanted the win as much as the Kenyan runners wanted to beat him on their home soil.

The Olympic champion waited until the last 300m before sprinting and opening the gap at the front. The rest followed him in a single file as the Moroccan went ahead to win the race in 8:21.20. Abraham Kibiwot took second in 8:22.33 ahead of Chala Beyo who finished third in 8:23.37. Immediately after the win, El Bakkali could hardly contain his delight as he removed his singlet and walked around the stadium bare-chested.

In the women’s race, Celliphine Chespol, who has battled with injuries since 2019, returned to winning ways in 9:30.55. The expected showdown between 2015 world champion Hyvin Kiyeng and Olympic champion Peruth Chemutai didn’t materialise as both failed to finish. Fancy Cherono and Jackline Chepkoech finished second and third respectively.

Arguably, the most predictable outcome came in the women’s 1500m. Two-time Olympic champion Faith Kipyegon ran behind Winnie Nanyondo, who was one of the pace makers here, and ensured she did just enough to hold off Ethiopia’s Hirut Meshesha to win the race in 4:02:40. Meshesha ran 4:03.01 for second place while Freyweyni Hailu ran 4:04.39 for third place. 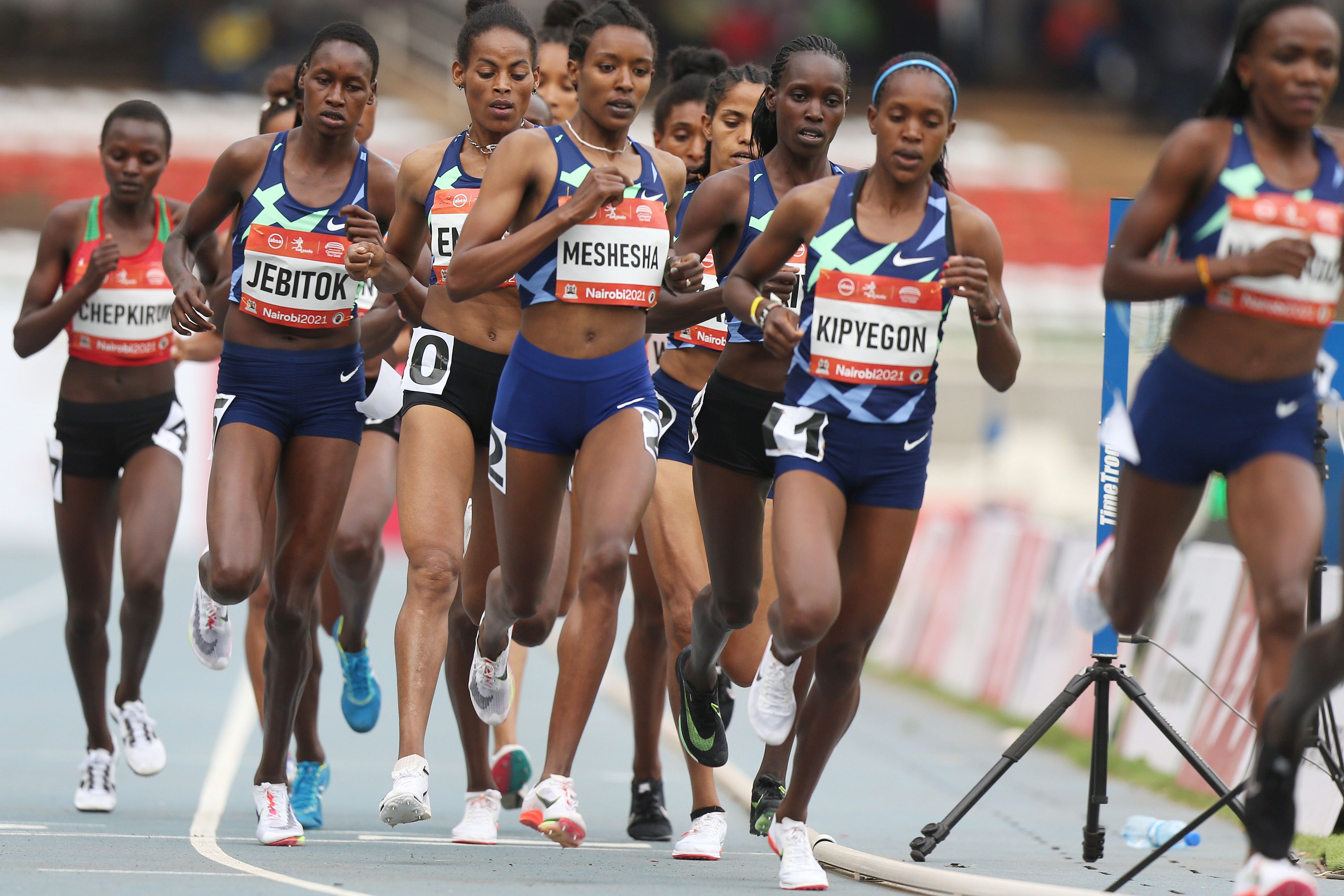 Having narrowly missed out on Olympic selection in both the 10,000m and 5000m, Margaret Kipkemboi Chelimo enjoyed a comfortable victory in the 5000m in 14:55.27, finishing 17 seconds ahead of Eva Cherono and Lilian Kasait Rengeruk.

Four-time world champion Pawel Fajdek won the men’s hammer with 78.33m, while Katrine Koch Jacobsen set her eighth and ninth national records of the year to win the women’s hammer. Having already become the first Danish woman to throw beyond 65, 66, 67, 68 and 69 metres earlier in the season, she continued her remarkable progress in Nairobi with throws of 70.54m and 71.09m.

Elsewhere, Serbia’s Milica Gardasevic won the women’s long jump with a wind-assisted 6.68m (2.2m/s) and Aliaksei Katkavets was the only man to throw beyond 80 metres in the javelin, winning with 82.65m.