Browning, Bisset and Hall tear it up in Brisbane

The Queensland Track Classic was the first Australian casualty of the coronavirus pandemic last year, but Brisbane’s major athletics meeting bounced back with a vengeance in 2021.

Despite a last-minute panic following the announcement of a positive Covid-19 test in Brisbane, the Classic, a World Athletics Continental Tour Silver meeting, went off in style. Highlighted by outstanding performances from Rohan Browning at 100m and Catriona Bisset and Linden Hall at 800m, Brisbane presented the best meeting of the domestic season as a lead-in to next month’s national championships in Sydney.

Despite a post-race observation that “I could have got out better” – if that was correct, then his rivals should have got out much better – Browning was in control from the gun. Osei-Nketia kept him honest over the second half of the race without ever quite getting on terms.

Given continued good form and fitness Browning should become Australia’s first male Olympic individual 100m representative since 2004 (Josh Clarke was selected for Rio 2016, but withdrew from the team through injury).

Two minutes has been the benchmark in Australian women’s 800m – and a handy time internationally - since Charlene Rendina ran a national record 1:59.0h in 1976. That mark stood until Catriona Bisset ran 1:58.78 in the London Diamond League meeting in 2019, defying repeated assaults from Tamsyn Manou (Lewis), in particular.

Today Manou was in commentary as Bisset led Linden Hall to a 1-2 finish with both running under two minutes.

Bisset had lost to Hall in Sydney two weeks ago, letting her rival build a big lead before falling short of catching her at the line. Brisbane was the mirror image of that race; this time it was Hall doing the chasing along the finishing straight after Bisset had blasted through a 57.5 opening lap on the heels of a pacemaker. Hall moved to challenge off the final bend, but Bisset held her off all the way to the line to win, 1:59.12 to 1:59.22. Both women bettered the Tokyo auto standard (1:59.50).

“I wanted to make the most of this (run),” Bisset said, “because who knows if the next race will go ahead.”

It was only the third time two Australian women had broken two minutes in the same race. Manou was involved in both the other two, beating Madeleine Pape in Sydney in February, 2000, and then when she and Margaret Crowley were second and third behind New Zealand’s Toni Hodgkinson in Brisbane in September the same year.

In third place in Brisbane 2021, Claudia Hollingsworth, who is coached by Craig Mottram and does not turn 16 until next month, ran 2:01.60.

Peter Bol continued both his winning form and his series of narrow misses at the Olympic auto standard in taking the men’s 800 in 1:45.48.

Nick Hough and Liz Clay maintained their supremacy in the sprint hurdles, Hough’s 13.51 in the men’s 110 turning back Nicholas Andrews’s PB 13:59. The Sharon Hannan-coached Clay survived a near-fall when she clobbered a barrier mid-race, to beat the Sally Pearson-trained Hannah Jones, 12.98 to 13.07.

Kennedy again sets the standard in the jumps

While not up to her national record form of the Sydney meeting, Nina Kennedy won the women’s pole vault with an impressive clearance at 4.75m. She came in at 4.60m, needing all three attempts to clear the height, but sailed over 4.75m first time. Only one of her three attempts at a new national record 4.85m was close.

Brandon Starc won the men’s high jump at 2.29m, before failing at the Tokyo auto standard of 2.33m.

Dani Stevens continued her comeback from injury with a 62.22m win in the women’s discus ahead of Britain’s Jade Lally (58.24m) and Taryn Gollshewsky (58.08m). Her five valid throws were all beyond the 60-metre line. Matt Denny won the men’s event with a best distance of 61.42m.

Montag took over two minutes off her previous best and moved to second on the Australian all-time list behind Jane Savile in winning her titles in 1:28:50.

Cowley, 1:22:28, was narrowly beaten across the line by Declan Tingay, but 22-year-old Tingay had received a third warning in the closing stages. The consequent two-minute time penalty dropped him down to third place in 1:24:27 behind Kyle Swan 1:24:08. 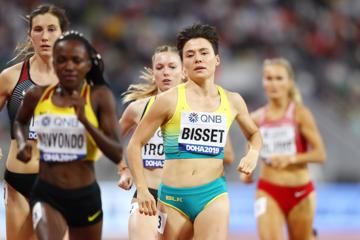 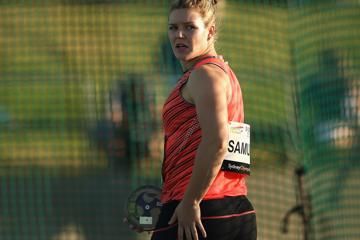