Four days after their clash in Bydgoszcz, the finishing order of Polish duo Pawel Fajdek and Wojciech Nowicki was reversed at the Janusz Kusocinski Memorial with Fajdek coming out on top at the IAAF Hammer Throw Challenge meeting in Chorzow on Sunday (16).

Not only did three-time world champion Fajdek get the better of European champion Nowicki, but he also improved on his compatriot’s world-leading mark, winning with 80.87m.

Nowicki led with his opening throw of 76.45m but Fajdek responded minutes later with 78.92m. Nowicki improved to 78.89m in round two but then went into the lead after throwing 79.52m in round three.

Fajdek regained top rank, though, with his 80.87m effort in round four. Nowicki threw beyond 78 metres with his final three attempts but could not improve on his mark from round three. Fajdek, meanwhile, ended his series with a 79.09m heave.

Polish athletes may have dominated the men’s hammer, but the host nation’s biggest star was defeated in the women’s contest.

USA’s Gwen Berry took an early lead with 72.51m, only to be overtaken by Alexandra Tavernier’s 73.05m in round two. All the big throws then came all at once in round three.

Poland’s multiple world and Olympic champion Anita Wlodarczyk had been sitting in fifth place ahead of her third-round throw, but unleashed an effort of 75.12m to move into second place.

None of the nine women in the field improved in the final three rounds, although Wlodarczyk consolidated her runner-up position with 75.11m in the final round. One consolation for the world record-holder was that she now moves to the top of the IAAF Hammer Throw Challenge standings, just ahead of Wang Zheng with Berry in third.

The women’s high jump went according to the form book with two-time world champion Mariya Lasitskene scaling a world-leading 2.02m to take the victory.

She cleared all heights up to and including her winning mark on her first attempt before ending her series with three misses at 2.07m. Ukraine’s Iryna Gerashchenko was second with 1.94m.

Walsh moved into second place on countback with 21.67m in round three, but Haratyk’s fourth-round throw of 21.65m gave the Pole the edge on countback as both men still trailed Romani of Brazil.

Haratyk then hurled a season’s best of 21.98m in round five to move into first place, but Walsh immediately responded with 22.18m to take the lead.

Like Walsh, US pole vaulter Sam Kendricks narrowly missed out on the meeting record.

As a result of needing three tries at his opening height of 5.21m, the world champion trailed Piotr Lisek for most of the competition. Both men cleared 5.71m on their first tries, while Lisek also got over 5.78m with one jump as Kendricks needed two attempts. Lisek, however, failed at 5.85m while Kendricks scaled it on his first vault.

One of the biggest surprises of the meeting came in the women’s 100m hurdles where Olympic champion Brianna McNeal was beaten by Karolina Koleczek of Poland.

Koleczek, making her 2019 debut, got off to a strong start while McNeal was a bit slow to react. Koleczek had a slight lead at half way but then edged further ahead in the latter stages. McNeal looked to be closing but couldn’t get on level terms with the 26-year-old as the Pole won by 0.04 in a lifetime best of 12.75.

Ewa Swoboda’s victory in the 100m flat was less of a surprise. The European indoor champion won by the length of a stride in 11.18 – her fastest time since the 2016 Olympic Games. USA’s Morolake Akinosun and Tatjana Pinto tied for second place in 11.26.

Elsewhere, Olympic 400m hurdles champion Dalilah Muhammad dropped the barriers in favour of the flat and won the women’s 400m in a lifetime best of 50.60. European champion Justyna Swiety-Ersetic was second in 50.85. 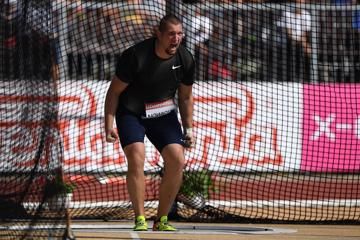