Orlando Ortega, fastest man in the world this year over the 110m hurdles, produced a highly significant victory at the 12th IAAF Diamond League meeting of the season on Thursday (30).

His winning time in Stockholm was 13.18, well adrift of his season’s best of 12.94, but on a chilly evening that was of no consequence.

What did matter was that in the Swedish capital the 24-year-old former Cuban – whose decision to switch allegiance to Spain means he will not be able to compete in next month’s IAAF World Championships in Beijing – left behind all his main rivals in the Diamond Race, which will be decided at the Zurich final on 3 September, where he will go to his blocks just two points behind the current leader and world champion David Oliver.

The 33-year-old US athlete got out well here and was at least level with his younger opponent at the halfway point, but Ortega finished remorselessly despite knocking down the ninth hurdle as Oliver drifted back to finish third in 13.24, behind Russia’s 2012 and 2014 European champion Sergey Shubenkov who clocked 13.22.

“I felt I could win this race, and I believe I can win the Diamond Race," said Ortega. "Right now I race for Spain and I am so very happy. This is a new opportunity for me.”

Oliver commented: “It just didn’t go my way today, but I’m just glad to come out of here without an injury heading into the World Championships.”

Zuzana Hejnova is heading back to her best form at an ideal time to defend her world 400m hurdles title.

Having won in London last Friday, the Czech athlete, who is second on this year’s world lists with 53.76, secured her second straight IAAF Diamond League win in six days as she won in 54.37 on an evening that was already cooling as the sun slipped down behind the rim of the famous 1912 Olympic stadium.

Her rigorous training with male athletes including world indoor 400m champion Pavel Maslak stood her in good stead as she finished the strongest, holding off a determined surge from Denmark’s Sara Petersen, who clocked 54.42 ahead of the USA’s Cassandra Tate in third with 54.88.

Hejnova now moves two points ahead of Kaliese Spencer in the Diamond Race. The Jamaican has been unable to compete in the past week because of injury but Hejnova was far from complacent afterwards.

“I need more training and my body feels very heavy,” she said. “I figured it will be hard for me to do good times here in Stockholm, maybe it depends on the curves. I find them rather hard.”

“Oh man, I’m living a dream right now!” said Mackey. “This is my first IAAF Diamond League event, so it’s really special. I’ll use the prize money to set up a training camp for girls over in Seattle. I didn’t make the Worlds team as I tripped in the trial but I have faith my time will come.”

Panama’s Alonso Edward took the 200m in 20.04, denying Anaso Jobodwana a birthday present on the day he turned 23.

However, two points for second place in 20.18 took the South African into the Diamond Race lead with the final to come. Edward is one point behind. That trophy is up for grabs.

The women’s 800m went to Renelle Lamote of France, who just edged past Lynsey Sharp in the final 20 metres after the Briton, her face clearly showing the effort she was putting in, had led the field round the final bend and down most of the home straight. 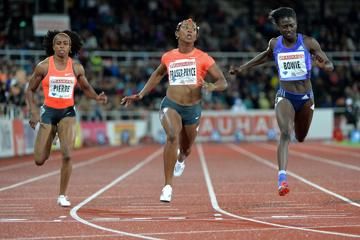 Fraser-Pryce shows off her speed in Stockholm... 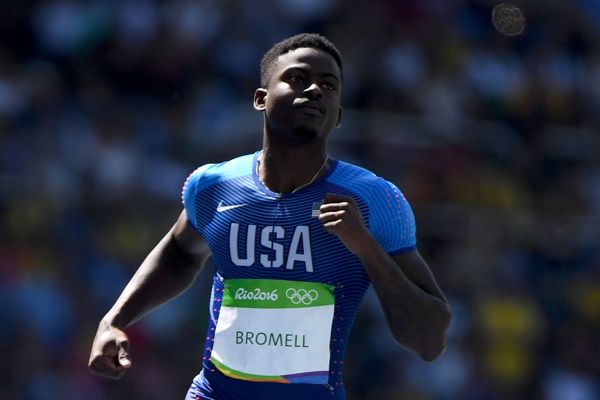