Ethiopia’s Dejene Debela emerged victorious from a five-man contest to retain his Xiamen Marathon title in 2:09:26 at the first IAAF Gold Label road race of the year on Sunday (6).

Compatriot Medina Deme Armino won the women’s race in 2:27:25. With their teammates filling the top three spots in both races, it was the third consecutive Ethiopian double podium sweep in Xiamen.

The tall and strong Debela, who will celebrate his 24th birthday on Wednesday, led the race almost from the start to the finish to become the first back-to-back men’s winner in the 17-year history of the race.

His winning mark of 2:09:26 is nearly two minutes faster than his clocking in Xiamen last year. It is also his second sub-2:10 performance to date, following his 2:07:10 PB set in Dubai two years ago.

The race, held in cloudy and cool conditions, started with a group of six runners leading the way, followed closely by seven chasers. When the leaders hit the 15-kilometre mark in 44:49, they were just four seconds away from the same split time of Moses Mosop when he set the 2:06:19 course record in 2015.

However, the leading pack that consisted of Debela and compatriot Birhan Nebebew as well as Kenyan trio Eliud Kiptanui, Asbel Kipsang and Gilbert Masai, slowed down gradually afterwards and was unable to drop the chasers.

Kipsang limped off the course after reaching 25 kilometres in 1:15:50 and had to withdraw from the race while the remaining four leaders were finally caught by the chasers before 29 kilometres.

After another eight kilometres, the leading group was once again trimmed to an all-Ethiopian quintet comprising Debela, Nebebew, Afewerk Mesfin, Belachew Alemayehu and Chele Dechasa.

None of the leaders was willing to take the risk to pull away too early and the group remained together patiently until the final kilometre when Alemayehu dropped away first, followed by Dechasa.

Thanks to his powerful home stretch, the long-legged Debela held off Mesfin to take the victory, maintaining his all-win record on Chinese soil as he also won the Beijing Marathon in 2:12:08 last September.

The 26-year-old Mesfin trailed two seconds behind to finish second in 2:09:28, breaking the PB of 2:09:49 he set at the 2013 Dubai marathon. Nebebew clocked 2:09:36 to finish third in what was only his second race over the classic distance.

Armino improved her career best by almost two minutes to upset a strong field and win the women’s race in 2:27:25.

The 21-year-old has contested five marathons since making her debut at the distance in 2016, winning the four most recent races and improving her PB each time.

A leading group of three runners – Armino, Milliam Ebongon of Kenya and Ethiopia’s Shasho Insermu – paced the race to 10 kilometres in 33:34 and 20 kilometres in 1:07:29. The 26-year-old Kenyan dropped back after the halfway point, turning the race in to a duel between Armino and Insermu .

Insermu, the fastest entrant with a PB of 2:23:28, tried to pull away after 41 kilometres, but Armino rallied to pass Insermu with 700 metres to go and never looked back before extending Ethiopia’s winning streak in the women’s race to 10 years.

Insermu finished second in 2:27:25 while Fantu Jimma took third place in 2:29:55, the same place she achieved in Xiamen three years ago. 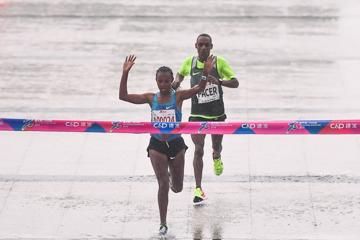