For Dibaba, one down one to go in Birmingham – day one wrap

It was cold outside. So very, very cold. But hearts were warmed in Birmingham as the first three 2018 world indoor titles were decided.

Double vision in the high jump

As the trumpeted tones of the UK’s Royal Air Force band, who performed at the opening ceremony, gave way to a catalogue of long-forgotten pop hits, the Thursday evening crowd in Arena Birmingham were treated to not one, but two high jump competitions; the men’s and women’s events taking place simultaneously as part of an innovative new presentation format.

The up tempo music and the passionate support of the British crowd served to propel the athletes over a succession of bars, with authorised neutral athletes clearly enjoying the DJ’s retro selections as they prevailed in both the men’s and women’s events.

For the men the gold was decided in the space of a couple of minutes. Outdoor world champion Mutaz Essa Barshim and London silver medalist Danil Lysenko had perfect records up to 2.33m but failed on their first two attempts at 2.36m.

As the arena fell silent, the Qatari athlete let out a primal roar before failing for a third time and just moments later looked on as Lysenko cleared to take his first senior global title.

The men’s event was close, whereas the women’s was very much controlled by 2014 world indoor champion Mariya Lasitskene, whose first failure of the competition came at 2.01m after she had already secured her the gold. She later sailed clear long after defending champion Vashti Cunningham settled for silver with 1.93m.

Trebles all round for Dibaba

It’s fair to say that Genzebe Dibaba likes racing indoors. The Ethiopian’s first global title was secured at the IAAF World Indoor Championships over 1500m in 2012 and she picked up her third consecutive gold over 3000m following a superb performance in Birmingham.

Content to sit at the back of the field for the first kilometre, the 27-year-old surged with just under 2000m remaining and was never seriously challenged, galloping to victory in 8:45.05. Tomorrow she’s back in the first round of the 1500m.

If the sight of Dibaba in full flow wasn’t enough, the Birmingham supporters were sent on their way with even bigger springs in their steps after Great Britain’s Laura Muir picked up bronze, narrowly failing to overtake the Netherlands’ Sifan Hassan in the closing stages.

Next time, at the IAAF World Indoor Championships…

From 10am on Friday…

Combined events aficionados will barely be able to sleep tonight, with not one but two multi-discipline contests to look forward to next session. There’s both a heptathlon for men and a pentathlon for women, with the men commencing proceedings with a morning 60m sprint that’s sure to blow away even the most stubborn cobwebs.

Favourite for the title is France’s outdoor world decathlon champion Kevin Mayer, who, having won in London last summer by more than 200 points, will be looking to dominate the competition.

Great Britain’s Katarina Johnson-Thompson starts her bid for a first global title, as she kicks off her pentathlon campaign with a 60m hurdles, quickly followed by a high jump and then a shot put.

The 25-year-old home crowd favourite won the European indoor title in 2015 with a bumper score of 5000 points and is seeking to improve on the silver medal she secured in Sopot four years ago.

Following Dibaba’s victory, Ethiopian fans have three more reasons to tune in, as Selemon Barega, Hagos Gebrhiwet and Yomif Kejelcha all toe the line in the 3000m, which rounds off Friday morning’s session on the track.

The longest endurance event contested at the IAAF World Indoor Championships is a lung-busting 15 laps of the 200m track and the Ethiopian trio, along with the likes of Olympic 5000m silver medalist Paul Chelimo and Kenyans Davis Kiplangat and Bethwell Birgen, will be trying to simultaneously ensure that they run fast enough to make Sunday’s final, yet slow enough to conserve enough energy to remain fresh for the inevitable last lap burn up in three days’ time. 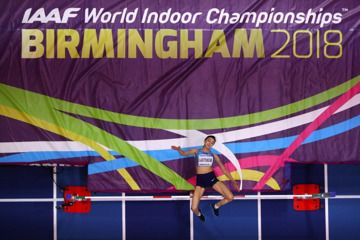 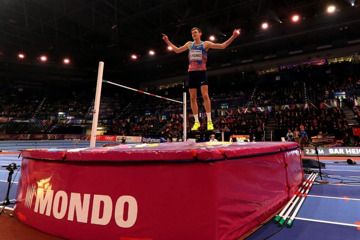 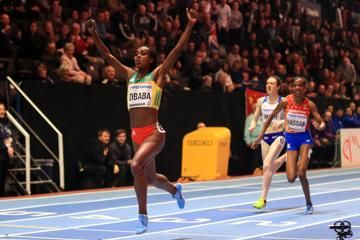