Geoffrey Kamworor’s title defence at the IAAF/Cardiff University World Half Marathon Championships Cardiff 2016 came under sizeable jeopardy before he had even crossed the start-line but the reigning champion staged a brilliant recovery to become the first runner to win back-to-back titles since Zersenay Tadese in 2009.

Starting in a fairly narrow funnel which had become slick in the rain, Kamworor lost his footing and hit the floor hard, just seconds into the race. But despite scraping his knees, the reigning champion got up largely unscathed and worked his way back to the front of the group which passed 5km in 14:10.

Unlike at the IAAF World Cross Country Championships in Guiyang last March, Kamworor largely eschewed the lead in the early stages with Bedan Karoki – another aggressive front-runner – taking the lion’s share of the pace.

Karoki wasn’t in any mood to relent at the front and his attritional tactics began to pay dividends with Mo Farah, who was making his debut at these championships, among those to struggle with the hot pace through 10km in 27:59.

Farah didn’t feature too prominently at the front of the leading group. By this point, the 33-year-old had drifted some five seconds off the pace although he was still inside his European record pace of 59:32.

But the pre-race narrative largely played out in the second half with Kamworor and Karoki running side-by-side in a manner not too dissimilar to Guiyang last year.

This sustained pace had cast Farah more than 20 seconds adrift at the 15km checkpoint while Ethiopia’s Tamirat Tola – the last remaining challenger – began to toil as the Kenyans covered the next 5km in 13:41.

On a day where records didn’t seem on the cards, the championship record of 58:59 was still within reach – and the world record wasn't too far out of sight either – as Kamworor and Karoki motored through 15km in 41:41, covering the preceding 10km in a respectable outright time of 27:31.

But the conditions worsened in the final quarter with a strong wind and horizontal rain buffering the runners.

The consensus is Kamworor has a superior sprint finish as demonstrated in Guiyang and Beijing, but the reigning champion opted to make a long run from home with about two kilometres remaining, opening up a gap of eight seconds on Karoki through 20km in 56:05.

The closing stages were more or less a formality for Kamworor who came through unopposed to retain his title in 59:10. He was only two seconds slower than he was in Copenhagen two years ago and would have almost certainly run faster in better conditions and if he hadn’t taken a heavy tumble at the start.

“It was really tough after that fall to catch up but I fought hard,” said Kamworor on that handicap. “I am very happy to win again. It puts me in a good place for the 10,000m in Rio.”

Karoki, who opted to front-run for the most part in spite of the conditions, lost some 26 seconds on Kamworor in the closing stages but was more or less safe in that position which he also occupied at the World Cross Country Championships last spring.

By contrast, there was an almighty scrap for the bronze medal. Farah moved towards medal contention with about 53 minutes on the clock but still had early leader Abayneh Ayele on his tail with the finish line in view.

Farah was visibly straining from the 15km point onwards but the world and Olympic champion gritted his teeth one last time to hold off a spirited challenge from his Ethiopian rival, who was only fourth in the de facto trial race in Spain last month.

“It would have been nice to have come here and get the win but a better athlete won on the day. Those guys were strong and I couldn’t quite keep with them – it was an incredible pace, at 10km they were really going for it,” said an exhausted and shivering Farah, who became just the second British man to win an individual medal in this race after Carl Thackery took the bronze medal at the second edition in 1993.

“It’s very difficult running alone and without a team up with you but it’s one of those things – you just have to go with it.”

Farah and Ayele were credited with an identical time of 59:59. While the Briton fell adrift of his European record in the closing kilometres, he did lower his European 15km record to 42:03 en route to his bronze medal.

As expected, the Kenyans regained their team title ahead of the Ethiopians, while defending champions Eritrea – weakened by the absence of star names such as Zersenay Tadese, Samuel Tsegay and Ghirmay Ghebreslassie – had to settle for bronze.

Led by Farah, Britain claimed their best placing in the team competition since 1993, finishing fourth and less than a minute behind the Eritreans. 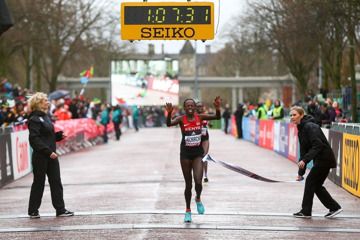