After spending two years being known as the man who came agonisingly close to breaking the marathon world record, Kenya's Wilson Kipsang made it his own property when he clocked 2:03:23* at the BMW Berlin Marathon, an IAAF Gold Label Road Race, on Sunday.

Barely a month after Makau set Berlin’s seventh world record, Kipsang won the 2011 Frankfurt Marathon in 2:03:42. He went on to win the London Marathon in 2012, but finished third at the London 2012 Olympic Games three months later.

Berlin’s cachet of possessing the fastest marathon course in the world has again been emphasised. This is the ninth world record in the German capital and the eighth in the past 15 years.

"I was feeling strong so I decided to push," said Kipsang. "I'm very happy that I've won and at breaking the world record."

"This is a dream come true; 10 years ago, I watched Paul Tergat break the world record in Berlin, and now I have achieved the dream. I felt strong, so I attacked at 35km, because the pace had become a little too slow.

"If I prepare very well, and with the same shape (I can go faster). Today there was a lot of wind, I was really fighting. Looking at my Marathon progress and career so far, I still think I have the potential to run faster. Anything under 2:03:23 would do," he added.

In only his second marathon, Kenya’s Eliud Kipchoge, the 2003 world 5000m champion, finished second in 2:04:05, improving his best by more than a minute. Another Kenyan, Geoffrey Kipsang (no relation) finished third in 2:06:26.

With four-time Berlin Marathon winner and twice world-record setter Haile Gebrselassie sending the field on its way on a bright sunny morning, with temperatures at an almost perfect 8 degrees Celsius at the start rising to 13 degrees Celsius, it was quickly apparent that Makau's record was under threat.

A leading pack of 10 men, with Wilson Kipsang content to sit at the back of the group as the pace makers Edwin Kiptoo and Philemon Rono did the hard work, went through 10km in 29:12 and halfway in 1:01:32 – Kipsang had asked for 1:01:45 prior to the race – before he, Rono, Kipchoge and Geoffrey Kipsang began to pull away from the rest of the challengers.

With Rono dropping out at 35km, the trio passed through that mark together in 1:42:36, 20 seconds off Makau's 2011 pace, but Wilson Kipsang had plenty in reserve and went to the front for the first time. He started to edge clear of his two remaining rivals one kilometre further down the road.

Behind him, Kipchoge left behind the younger Kipsang at 38km before Wilson Kipsang passed 40km in 1:57:12 – three seconds faster than Makau did in 2011 – and continued to work hard over the final two kilometres before becoming athletics' first world record breaker of 2013.

Kenyans also finished first and second in the women's race with Florence Kiplagat fulfilling her role as favourite and winning in 2:21:13 with Sharon Cherop second with 2:22:28.

“I felt strong in the first half of the race, but then I started getting problems with my right foot, I had a blister which forced me to slow down. I found the weather conditions harder than two years ago here, but I’m still very happy," said the women's winner.

Germany's Irina Mikitenko, now 41 and the German record-holder with 2:19:19 set when winning in Berlin five years ago, achieved her objective of setting a world masters' best when she finished third in 2:24:54, improving the previous mark by almost a minute. 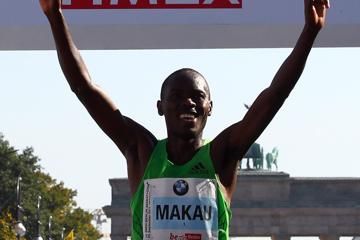