Third time lucky for Maisei at the Hong Kong Marathon

After two years of rehearsals and reversals, Kenya’s Julius Maisei got it right at the third time of asking, and won the 17th edition of the Standard Chartered Hong Kong Marathon in 2.14.18 on Sunday (24).

Maisei had finished second at this IAAF Silver Label Road Race two years ago, and fourth, albeit just one second behind the winner last year.

This time, with three kilometres to go, he took off  with what would normally have been described as a finishing sprint and it was enough to carry him clear of his pursuers: compatriot James Mbugua and Ethiopia’s Deribe Robi.

Despite having to ease up on the torrid pace in the final kilometre, which provoked a few anxious looks back, Maisei had built up enough of a  cushion to relax and come home 10 seconds in front of Mbugua, who clocked 2.14.28 for second place. Robi was another nine seconds adrift in third place, with 2.14.37.

The strong headwind for at least half of the out-and-back course, coupled with the local policy of not employing pacemakers mitigated against fast times. Although it was reasonably cool at 17C degrees, Maisei said that the humidity was again a factor, and a group of close to 20 dawdled through the first half of the race in close to 68 minutes.

Robi was mostly responsible for leading the pack for much of the second half, and also contributing to its gradual break-up, but there were still a dozen in contention at 32km.

It took Maisei and Mbugua to move to the front and help the Ethiopian  with the pace in order to rapidly reduced the contenders to a trio; before, just past the 39km mark, Maisei made his decisive move.

“I was getting stressed with so many people being in the group. I was wondering when they were going to break up. I was feeling strong, but I just didn’t know about the others. At about 39-and-a-half, I could see the 40k marker, I decided to move. I thought that if they catch me now, they deserve to win,” said Maisei.

The headwind meant that Dereje Abera’s course record of 2.11.27 from last year was never remotely threatened; that was some consolation to the Ethiopian, who suffered a calf sprain, and limped home just outside the top ten.

However, Maisei said that he thought pacemakers would have made a big difference to the finishing time. “I think they could even do 2.06, 2.07 here with pacemakers”.

Like Maisei, Mbugua has previous form here, third in 2011 and now second; it remains to be seen, as he admitted ruefully, whether he can come back next year and emulate Maisei.

Misiker Mekonnin Demissie had little trouble defending her women’s title in 2.30.49, just over half-a-minute slower than the course record of 2.30.12 she set last year.

The Ethiopian, who represented Bahrain as a youngster, before going to live in New Mexico five years ago, was never really challenged for the victory. She always looked in control, heading the pack, until she broke away at 35km.

“It was windy, it was very hard, because it was in the face a lot,” she said.  “I felt good, and confident, and now I feel very happy”.

As in the men’s race, there were only two other runners in contention at in the latter stages of the race.

Demissie’s compatriot Makda Harun got the better of DPR Korea’s Kim Kum Ok, to finish second in 2.31.20. Kim finished third in 2.32.21, but that also won her the concurrent 14th Asian Championships title, thus emulating her victory the last time it was held in Hong Kong, in 2008.

One of the race favourite’s, Mongolia’s Ser-Od Bat-Ochir, won the men’s Asian title. He clocked 2.17.56 just three weeks after his outing at the Beppu-Oita Marathon in Japan. 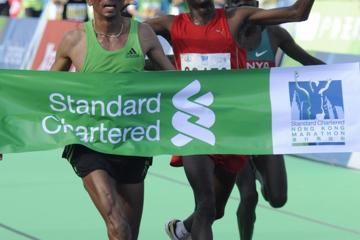