Belarusian Alina Talay ran the third-fastest time of 2013 in winning the 60m Hurdles in 7.94, while sprinters Murielle Ahouré and Mike Rodgers were stars of the show in Jesse Owens’ stadium for the International Meeting Val de Reuil last night (12) in winning the 60m in 7.06 and 6.56 respectively.

Talay was a relatively low-key winner in Val de Reuil but may have produced the best performance of the evening. The World indoor bronze medallist broke her personal best with 7.94 to go to equal third on the world’s season list. “Obviously I’m satisfied by the clock, this was an interesting race, and felt good and I felt I could win it,” said the 23-year-old. “I’ve improved my finish, but I know I can also get a better start, as I was still second at the fourth hurdle.”

Coached in Minsk by former hurdler Victor Myasnikov (Olympic finalist at 110m Hurdles and 1976 European indoor champion at 60m Hurdles) in a group including Maksim Lynsha (13.36 at 110m Hurdles last year) and Alex Linnik (World junior silver medallist in 2010), Talay has high ambitions for 2013. “I hope to run faster at the European Indoors, and for this summer I would like to reach the World Championships final at 100m Hurdles – and why not even win a medal?!”

The men’s race was won in 7.55 by the impressive American Omo Osaghae. “I had to have a good start because I knew that there was possibility that the race was going to be very close.” And it was, as American Kevin Craddock finished 0.01 behind in 7.56, followed by Cuban Orlando Ortega 7.57 (who had been the fastest in heats with 7.55), and the two Frenchmen Pascal Martinot-Lagarde (7.62, and 7.61 in heats) and Dimitri Bascou (7.64).

In the final, Osaghae badly hit the first hurdle but was able to recover and win the race. “Now my target is to run 7.4 before the end of the winter,” he said, hopeful of a better start.

Murielle Ahouré’s start was again unmatched in the women’s 60m sprint, and she won her seventh race (including heats) of the year in 7.06. “I think it’s consistent, I have no special objective as I’m just working on the first 60m of my 100m for this summer,” said the world’s fastest sprinter this winter (7.00 in January) who won with a big margin over American Barbara Pierre (7.14) and Bulgarian Ivet Lalova (7.19).

Coached by Allen Powell in Houston, Ahouré believes she is even stronger than last year, when she reached the Olympic final at 100m. “We’ve changed everything – the training, the planning, the diet – and I’ve improved everywhere!” The Ivorian is looking to run even faster in Birmingham this weekend when she’ll be up against Olympic champion Shelly-Ann Fraser-Pryce and World champion Carmelita Jeter.

The men’s race was a very close one, with Kim Collins of St Kitts & Nevis making the best initial impression, but USA’s Mike Rodgers had the best finish and won by two hundredths in 6.56. “The track is beautiful here, the crowd is amazing, I wish there were more meetings like this!” said Rodgers. “I have a disturbing pain behind my knee so I was only running at 80% today, but hopefully it will be fixed before my next races.”

Like Ahouré, Rodgers is looking forward to the outdoor season. “My aim is to qualify for the World Championships and break the 4x100m World record with Team USA.” In Val de Reuil, the field suffered from the withdrawal of French Jimmy Vicaut, who is preparing for the National Championships on Saturday, and Jamaican Lerone Clarke who couldn’t warm up due to muscular pains. French star Christophe Lemaitre was third in 6.69 and later won the 200m in 20.91 from junior Mickaël Zézé (21.29).

Cuban Yasmani Copello set the best time of the season in the rarely-run indoor 400m Hurdles with 49.54, while Felix Sanchez, holder of the World best (48.78 last year), couldn’t run and watched the race from the crowd.

Steeplechase specialist Mahiedine Mekhissi-Benabbad was the favourite for the 1500m and followed the pacemaker until the 1000m point (2:24.72). The double Olympic silver medallist then took the lead and resisted the attack from Morocco’s Abdelaati Iguider with 300m to go. Mekhissi-Benabbad accelerated and was almost sure to win when Iguider came back to win in the last few metres with 3:38.24.

Another steeplechase specialist, Paul Kipsiele Koech, was more successful in the 3000m. The Kenyan was a comfortable winner in 7:38.61, more than a second ahead of Hayle Ibrahimov who broke his own Azerbaijani record with 7:39.79 in second.

Elsewhere, Natasha Hastings recorded the second-fastest time in the world this year to win the 400m in 51.80, with Indira Terrar setting a Cuban record of 52.45 in second. Eloyse Lesueur won the long jump with 6.58m, while former World champion Eunice Barber continued her comeback with a season’s best of 6.19m. Mickael Hanany won the High Jump with 2.24m but didn’t make further attempt in order to not take risks before the National Championships. 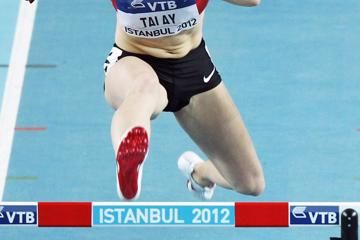 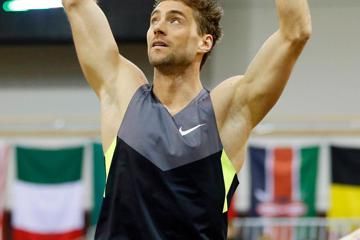