Gemma Steel broke her own course record, while Uganda’s Thomas Ayeko drew his 2013 season to a close by making a Half-marathon debut to remember at the BUPA Great Birmingham Run, an IAAF Silver Label Road Race, on Sunday (20).

Steel, the 2011 European cross-country bronze medallist, took almost a minute off the record she set two years ago, winning in a personal best of 1:10:19.

She was challenged in the early stages by Kenya’s Purity Kimetto, but broke clear after three miles and had established a 32-second lead by the 10km mark.

From that point onwards it was a race against the clock and, despite a strong finish, the Briton fell just 20 seconds short of her goal of breaking 70 minutes. Nevertheless, the 27-year-old was satisfied with her result.

“I felt so fresh that I think I could have run it again,” she said. “I was apprehensive about the hill all through the race and it was in the back of my mind, but I managed to run off the top of it and come home strong.

“I thought I’d have no legs left but I managed to sprint in and felt like I was flying, really good. I’m building towards the cross-country season, but I want to do another Half-marathon first – a flat one.  I’ve not got one lined up, but I think I can get close to 68 minutes.”

Steel has some cross country races lined up before targeting the IAAF World Half Marathon Championships in Copenhagen, where she hopes to improve on her seventh-place finish from the last edition. “I’d like to give it a go and feel like I could get a medal.”

For 21-year-old Ayeko, it was a successful return to the British Isles, having won the IAAF Cross Country Permit meeting in Antrim in February.

Just before the 10km mark, which was reached in 29:57, Ayeko moved to the front of the pack and his surge was sufficient to force the Ethiopian to fall back, a move from which the former World indoor 3000m champion was unable to recover.

That left four to contest the remaining seven miles, but, despite turns on the front for both Birmingham and Thompson, Ayeko made the decisive move just before mile nine and a 4:29 split enabled him to build a substantial lead.

Despite a steep hill with just two of the 13.1 miles to go and both Thompson and Abdirahman refusing to give in, Ayeko held on strongly to cross the line in 1:02:32, 31 seconds ahead of Thompson, who edged Abdirahman in a sprint finish.

It was a deserved victory for Ayeko, who demonstrated perfect pace judgement on a tricky, hilly course.

“It wasn’t too bad. It was my first Half-marathon, so the race was ok,” said Ayeko, who finished 11th in the 10,000m at this year’s IAAF World Championships. “At 10km, the body was still good. It was the plan to take it easy at the start and then push on.”

With a successful debut over the distance completed, Ayeko plans to return to Uganda for a training block, before a return to cross country over the winter and a genuine attempt to win the IAAF World Half Marathon Championships that take place in Copenhagen in March.

Despite finishing second, Thompson, the 2010 European 10,000m silver medallist, was pleased with his day’s work, coming as it did after a tough summer, during which he narrowly missed out on selection for the World Championships.

His 1:03:03 was a marked improvement on his performance at the recent Great Scottish Run, where he ran a modest 1:04:49.

“With the nature of the course being a little bit windy and a little bit up and down, I could use a bit of brain power. I’m not anywhere near top shape and even though Tariku was surging in the first half, I could use the conditions and the hills to my advantage.

“The guys were reacting to every little thing but I got to 10 miles and thought ‘great’. I was prepared to lose second to try to win the race and I hit the hill as hard as I could, but he (Ayeko) was just too strong.”

BACK
Pages related to this articleAthletes
Thomas Ayeko 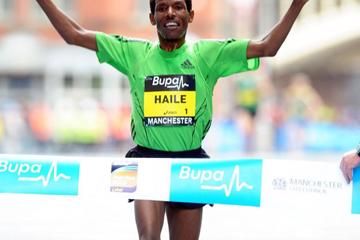 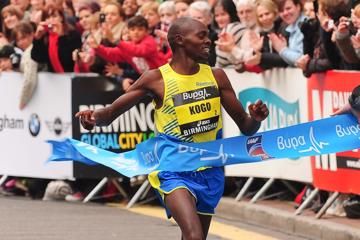