Six of the best for Birmingham, Zhao over 80m in Hobart

Sometimes it’s hot, sometimes cold; sometimes there are bushfires in the surrounding hills, sometimes, even in summer, there is snow atop nearby Mt Wellington.

One thing never seems to change, however. When Collis Birmingham turns up for the 5000m at the Graeme Briggs Classic, he wins.

Birmingham came again on Saturday day and, for the sixth time in seven years, he won. What happened on the seventh occasion, you ask: he didn’t run, is the answer.

Paced by Ryan Gregson through 3000m in a touch outside eight minutes, Birmingham took control of the race soon after to scoot away to win by more than 50m in 13:27.35. British runner Nick McCormick was second, just getting the better of Gregson who continued on to finish third in his debut as a senior over 5000m on the track.

The Tasmanian city of Hobart belied its geographic isolation as the southernmost Australian capital by offering an eclectic mixture of events winners. China’s Zhao Qinggang took the javelin with his second-ever throw beyond 80m; Susan Kuijken of the Netherlands won the women’s 1500m and there were victories for New Zealand in the men’s Shot (Tom Walsh) and the 400m Hurdles (Michael Cochrane).

And, on a warm but blustery evening, an extra puff of wind deprived Linda Leverton (formerly Linda Allen) of an Australian record in the women’s Triple Jump.

Birmingham continued to mine the rich vein of form he has been in since the start of the year.

He started 2013 with a smashing win at the Australian world cross-country selection trial in January and followed up with a win and personal best in the Marugame Half-marathon earlier this month.

In the lead-up to the Briggs race, Birmingham said he was not looking too far ahead this year. His immediate goal is the IAAF World Cross Country Championships in Bydgoszcz next month.

“World cross is my focus this year, on 24 March in Poland,” Birmingham said.

It will be Birmingham’s sixth attempt at the event. His best placing is 29th, in Amman in 2009, the year he went on to make the 5000m final at the Berlin World championships. He seems in much more consistent form now than then.

Birmingham is adding year-by-year to the rich history of the 5000m in Hobart. The Briggs Classic is named after former Athletics Australia president Graeme Briggs. In 1965, Ron Clarke broke the World record for the 5000m in Hobart. The indefatigable Briggs organised the meeting virtually single-handed – “he was even on the gate selling programs,” Clarke recalled once.

In fact, Briggs organised things so perfectly that Clarke was worried the World record might be disallowed. The North Hobart Oval, used for athletics then, sloped markedly from one side to the  other and the canny Briggs saw to it that the 5000m went 13 times down the hill and only 12 times up it.

Not to worry, Clarke simply ran a couple of seconds faster in Auckland a couple of weeks later as he started what remains one of the most famous years in track distance running.

Hopefully, Birmingham will follow his latest run with an even better exploit in Poland.

Kuijken, who is currently based in Australia, produced her fastest time in three years to out-run Olympic semi-finalist Zoe Buckman from the front in the women’s 1500m.

The 26-year-old Dutchwoman led every step after the pacemaker pulled out, holding off Buckman narrowly but decisively, 4:09.66 to 4:10.23.

After young Tasmanian Hamish Peacock threw 78.85m at the Hunter Classic three weeks ago, hopes were high for an 80m throw in front of a home crowd.

The winner, with 80.77m, was China’s Zhao Qinggang. It was just the second time the 27-year-old has gone over 80m (his best of 81.74m came in winning last year’s Chinese national title). Zhao is training in Australia with Uwe Hohn, the former World record-holder.

New Zealand’s Tom Walsh led a youthful 1-2 in the men’s Shot. Walsh, who will celebrate his 21st birthday next week, was within 23cm of his recent personal best with his winning throw of 19.60m.

Behind him, Damien Birkinhead, last year’s World junior Championships bronze medallist, was just one centimetre short of his personal best with the senior Shot with a distance of 18.86m.

Coming after Australian World Youth hopeful Matthew Denny threw 67.28m in the discus in Brisbane, there is clearly a lot of young throwing talent in the southern hemisphere.

Eleven years ago, Nicole Mladenis took advantage of a perfect 2.0m/s tailwind to set an Australian record 14.04m in the Triple Jump.

On Saturday night, Linda Leverton jumped three centimetres farther, but her 14.07m will not count as a record because the assisting wind registered just over the legal limit at 2.3m/s. She had a best legal jump of 13.64m (1.1m/s).

Leverton is coached by Mitch Watt’s coach Gary Bourne who had been very confident she would get the record on Saturday night. With a bit of luck, he might still be proved right by the end of the season.

BACK
Pages related to this articleAthletes
Collis Birmingham 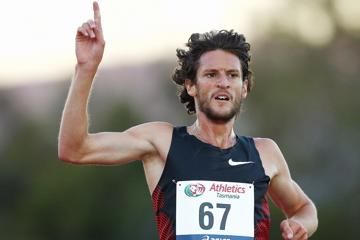 Birmingham feels the love for Hobart and agai...