Rooth moves to No.2 on world U20 decathlon all-time list, Ehammer leaps 8.15m

European U20 bronze medallist Markus Rooth smashed the Norwegian U20 decathlon in Oslo on Sunday (28), moving to No.2 on the world U20 all-time list with a score of 8238.

His momentum continued on the second day with a PB of 14.18 in the 110m hurdles. He followed it with 46.07m in the discus and 4.75m in the pole vault, both a little below his PBs but still his best ever within a decathlon. He then unleashed a PB of 59.80m in the javelin before ending his competition with a 4:39.79 clocking in the 1500m, giving him a final score of 8238. Sander Aae Skotheim finished second with 7839.

Only world champion Niklas Kaul has ever scored higher than Rooth's mark in a decathlon with the U20 implements, although it should be noted that Torsten Voss and Yordanis Garcia produced respective marks of 8397 and 8257 with the senior implements while still in the U20 age group.

Rooth's previous best of 7692 was set at last year's European U20 Championships. The previous Norwegian U20 record was 7815, held by Toralv Opsal, who in 2016 broke the national U20 record that had been set by Karsten Warholm.

The world U20 decathlon bronze medallist set an outright PB of 7.80m to win the Swiss indoor title earlier this year. He bettered that in the second round of today’s competition in Schaffhausen, leaping 7.84m, which was followed by 7.82m. 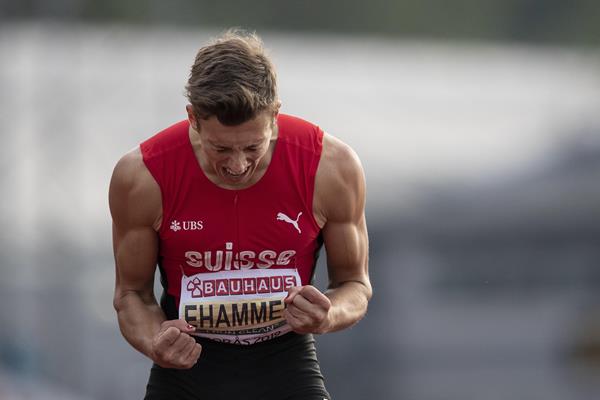 Only one Swiss athlete, national record-holder Julien Fivaz (8.27m) has ever jumped farther. And only a select group of decathletes have ever jumped beyond eight metres.

Elsewhere in Switzerland, Ajla Del Ponte and Silvan Wicki were victorious over 200m in Bern.

Del Ponte, who has clocked some swift times at 150m in recent weeks, stopped the clock at 22.88 to win her race, but the following wind of 3.0m/s means her time cannot count as a personal best.

Ethiopia’s Helen Bekele, also competing as a guest, won the women’s race in 32:12.49 as Switzerland’s Fabienne Schlumpf placed second in 32:16.37. Elena Burkhard won the steeplechase in 9:53.67.

Before lockdown, the European indoor champion had cleared 2.31m during the indoor season. Following a four-month break from competition, he opened his outdoor campaign last week with 2.25m.

Tonight in Ancona he went much higher and tied the world-leading mark. He ended his series with three unsuccessful tries at 2.34m.

Finland’s top trio of sprint hurdlers provided the highlight of the action in Espoo.

“Such a weird feeling to be disappointed with 12.8s,” tweeted Korte, who clocked a national record of 12.72 last year, having returned to action following a long break from the sport. “I’m never satisfied if I run bad races.”

The highlight of the infield action in Espoo came in the women's triple jump, where Senni Salminen produced her first 14-metre jump, leaping 14.04m (1.5m/s). Her performance moves her to fourth on the Finnish all-time list.

About 30km away in Vantaa, Krista Tervo came close to the Finnish hammer record she set three weeks ago.

Her first-round throw of 71.35m was sufficient to win and was just 58 centimetres shy of her lifetime best. 17-year-old Silja Kosonen was second with 67.88m.

Aaron Kangas won the men's hammer with 76.41m, the second-best mark of his career after the 77.09m PB he threw three weeks ago. Toni Kuusela won the javelin with a season's best of 81.36m.

One week after smashing his own Slovenian record, discus thrower Kristjan Ceh faced his toughest opponent of the year so far – world bronze medallist Lukas Weisshaidinger – in St Pölten on Saturday, but he ended up winning comfortably.

All five of Ceh’s valid throws were farther than the Austrian’s best. Ceh opened with 65.67m and improved to 65.68m in the fourth round before extending his lead with 67.19m in the fifth. Weisshaidinger, meanwhile, managed a best of 64.27m.

Swedish vaulter Michaela Meijer cleared a world-leading 4.72m in Mölndal on Saturday. Meijer, who opened her season last week with 4.60m, added one centimetre to her outdoor PB.