Three years after being soundly beaten into third place at the Sanyo Women’s Half Marathon, Sally Chepyego returned to Okayama on Monday (23) in the hope of a better result. The Kenyan well and truly avenged that defeat and shattered the course record in the process.

Chepyego won the world youth 3000m title back in 2001. A few years later she relocated to Japan and has been based there ever since, running for Team Kyudenko.

For the first time since her world youth triumph, she represented Kenya at this year’s IAAF World Championships in Moscow, finishing seventh in the 10,000m with a PB of 31:22.11.

The 28-year-old appears to be in the form of her life and in Okayama she proved as much with a dominating performance.

The race had big domestic interest too, as it was one of the Japanese selection races for next year’s IAAF World Half Marathon Championships.

A seven-woman lead pack got off to a steady start. Japan’s 34-year-old Yukiko Akaba, who finished third at this year’s London Marathon, led the group through 5km in 16:38.

The pace began to increase, but it was still the same group of seven women at the front – all but two of them Japanese – as they just dipped under 33 minutes at 10km; the pack comprising Chepyego, Akaba, Reia Iwade, Sayo Nomura, Chieko Kido, Mai Ito and Kenya’s Felista Wanjugu.

Chepyego then began her long run for home as the lead group splintered. Having covered that 5km section in 15:52, by 15km her lead was 18 seconds over Wanjugu and Ito. Chepyego was not only destined for victory, but she was now operating well inside course record pace.

Akaba and Iwade had dropped about 40 metres behind Wanjugu and Ito at 15km, but Akaba then began to claw back the deficit and by 20km she had moved up to second place, a comfortable three seconds ahead of Wanjugu.

There was no stopping Chepyego, though. She crossed the line in 1:08:24 to smash the course record, winning by exactly one minute from Akaba. The previous course record of 1:09:16 was set by Akaba two years ago.

Wanjugu held on for third place in 1:09:36 while Iwade was the fourth woman to dip below 70 minutes, clocking 1:09:45 on her debut at the distance.

It means Iwade, who has just celebrated her 19th birthday, now looks likely to represent Japan in Copenhagen next March.

BACK
Pages related to this articleAthletes
Yukiko Akaba 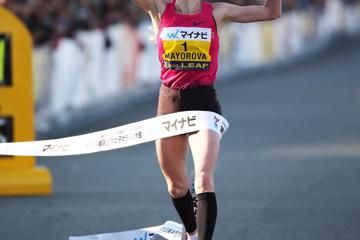 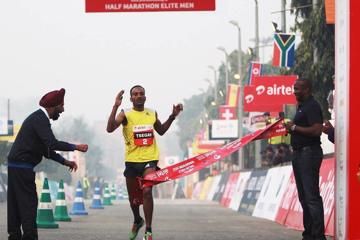