Reese, the three-time world and 2012 Olympic champion, trailed Great Britain's Lorraine Ugen throughout the competition until stealing the victory with a 6.98m leap in the final round. Ugen reached 6.76m to finish second.

Rojas, Venezuela's Olympic silver medallist, reached 14.67m in the second round to take the triple jump win, well ahead of Jamaican Kimberly Williams, who leaped 14.35m.

On the men's side, two-time Olympic silver medallist Will Claye kicked off his season with a 17.40m effort to equal Cuban Andy Diaz's as the early season world leader. Chris Benard of the US was second, his 17.15m also a season's best.

The men's 100m was even closer, with Mike Rodgers taking victory in 10.08, just ahead of Canada's triple Olympic medallist Andre de Grasse, who clocked a season's best of 10.10.

Olympic shot put champion Ryan Crouser won his fourth competition of the year in as many starts, this time a 21.79m effort, more than a metre better than Jamaican O'Dayne Richards, who reached 20.76m.

Meanwhile, Sharika Nelvis of the US beat compatriot Jasmine Stowers in the 100m hurdles 12.58-12.63 to collect her third victory in four competitions this season.

BACK
Pages related to this articleAthletes
Brittney REESE 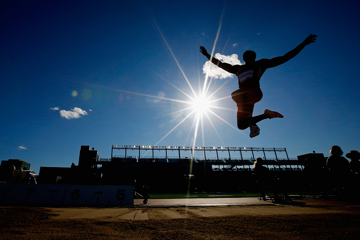