The biggest shock of the NCAA Indoor Championships happened just 15 minutes into the programme on the first day of action in Birmingham, Alabama, on Friday (11).

Pre-event favourite Akela Jones of Kansas State clipped the final barrier in the first event of the pentathlon, the 60m hurdles, and landed flat on the ground. After a brief pause, she got back on her feet and crossed the line in 10.98, almost three seconds shy of her 8.00 PB – the fastest in the field.

It gave Jones just 540 points, some 421 points adrift of the next-slowest competitor and 569 points away from Georgia’s defending champion Kendell Williams, who set a PB of 8.09.

Jones’ chances of victory had disappeared, but all was not lost.

In the next event, the high jump, she broke her own Barbadian record and equalled the world lead with a leap of 1.98m. It also tied the US indoor collegiate record set seven years ago by Destinee Hooker and is the second-best jump ever in combined events history, bettered only by 2008 Olympic high jump champion Tia Hellebaut’s 1.99m from that year’s World Indoor Championships pentathlon.

But despite scoring 1211 points for that event, Jones was still in last place overall. Williams, meanwhile, maintained her lead, clearing a solid 1.86m.

In the shot put, Jones once again produced the best mark of the day with an effort of 13.59m. Williams responded with a huge outright PB of 13.55m, boosting her chances of breaking her own collegiate pentathlon record. Jones was in 11th place with two events to go, but one of those was the discipline in which she won the 2014 world junior title: the long jump.

Not only did Jones post the best mark in the long jump, but all three of her jumps were comfortably farther than what anybody else managed. After 6.56m in the first round, she improved to 6.67m with her second leap and then flew out to 6.80m, another national record, in the last round. Only two other women have ever jumped farther in a pentathlon long jump.

More importantly, though, in the space of two events she had gone from dead last to the bronze medal position with just the 800m to go.

Having jumped 6.35m, Williams was destined for her third consecutive pentathlon victory – and a collegiate record – going into the last event. She duly delivered, covering the four laps of the track in 2:20.47 to bring her points tally to 4703. Her next competition will be the pentathlon at the IAAF World Indoor Championships Portland 2016.

“I knew I had to start off really, really strong,” said Williams. “She [Jones] is a strong hurdler. I knew I couldn’t relax because she could make up those points, she’s just so good in every event. It was about staying focused on myself and my numbers."

Jones didn’t quite have the fairy-tale ending she had hoped for, pulling out of the 800m after one lap. Had she equalled her PBs in the 60m hurdles and 800m, she could have broken the world indoor record.

“I just felt like I had enough for the day,” she said. “I had to listen to my body.”

Williams and Jones weren’t the only record-setters on Friday. In the heats of the men’s 60m, Cameron Burrell broke the championship record with 6.50. His PB is now just 0.02 slower than that of his father’s, Leroy Burrell, whose 6.48 in 1991 was a world record at the time.

Less than half an hour later, he ran a 3:52 split on the mile leg of the distance medley relay to anchor Oregon to victory with a championship record of 9:27.27.

Quanesha Burks followed her outdoor NCAA victory from last year by winning the indoor title in the long jump. Her winning leap of 6.80m was a PB and matched the mark that Jones had set earlier in the day in the pentathlon.

Elsewhere, the top performance in the preliminary rounds came from Felicia Brown in the 200m. She came within 0.14 of her world-leading mark to win her heat in 22.59.

BACK
Pages related to this articleAthletes
Akela Jones 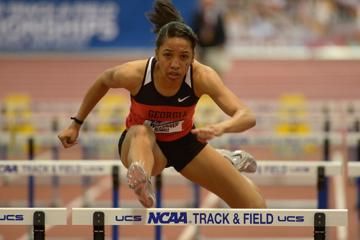 World leads for Bromell, Dendy and McLeod at ...

Richardson and Allman live up to expectations in Eugene