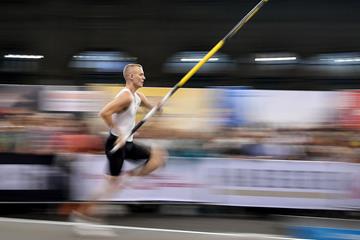 Just hours after Armand Duplantis broke the world record in Torun, two-time world champion Sam Kendricks made a bit of pole vault history of his own over in Rouen.

Competing at the Perche Elite Tour meeting, Kendricks cleared an indoor PB of 6.01m, adding a centimetre to the North American indoor record that had been shared between Jeff Hartwig and Shawn Barber.

He dominated the competition, enjoying first-time clearances up to and including 5.86m. With the competition then won, he had the bar put up to 6.01m and got over it on his third and final try.

Britain’s 2013 world U18 champion Harry Coppell was second with 5.80m, finishing ahead of Cole Walsh on countback. Olympic champion Thiago Braz and Valentin Lavillenie tied for fourth place with 5.74m.

One week after opening her 2020 campaign with a 6.59m long jump PB, the 24-year-old Venezuelan began her series in Metz with a marginal foul just shy of the 15-metre line. She landed a legal 14.94m in round two, breaking her own South American indoor record, and then backed it up in round three with 14.91m.

After another marginal foul, this one landing beyond the 15-metre line, Rojas nailed another valid jump: 15.03m. It moves her to equal sixth on the world indoor all-time list and is the best indoor triple jump since 2010.

World U20 10,000m bronze medallist Berihu Aregawi made an impressive indoor debut, winning the 3000m in Metz by more than 12 seconds in 7:36.85. That performance puts the 18-year-old Ethiopian fourth on the world U20 indoor all-time list.

Garrett Scantling continued his encouraging return to action after a three-year hiatus by winning the heptathlon at the US Indoor Combined Events Championships in Annapolis.

He set PBs in five of the seven disciplines, including a huge best of 7.45m in the long jump. A 16.25m effort in the shot put moved him into the overall lead and he maintained that position to the finish, ending with a world-leading PB of 6209.

He now moves to 10th on the North American indoor all-time list, one point ahead of two-time world decathlon champion Trey Hardee.

Annie Kunz produced the series of her life to win the pentathlon. She set PBs in every discipline en route to a lifetime best of 4610.

In his first heptathlon of the year, European indoor champion Jorge Urena won at the Indoor Combined Events meeting in Tallinn. The Spaniard amassed 6091, having come close to his PBs in the 60m and high jump. Estonia's Risto Lillemets was second, falling just shy of the 6000-point barrier but still ending with a big PB of 5996.

At the Hustopece Jumping meeting in the Czech Republic, Britain’s Tom Gale tied the world-leading mark of 2.33m to win the men’s event. Poland’s Sylwester Bednarek took second place on countback from Jamal Wilson of The Bahamas, both men clearing 2.30m.

Nikki Manson made it a British double, winning the women’s contest with a best of 1.93m.

Jumping events provided the highlights at the Italian U20 Championships in Ancona. European U20 champion Larissa Iapichino, still only 17 years of age, set a national U20 indoor record of 6.40m to win the long jump. Iapichino, daughter of two-time world long jump champion Fiona May, also owns the national U20 outdoor record with her 6.64m leap from last year.