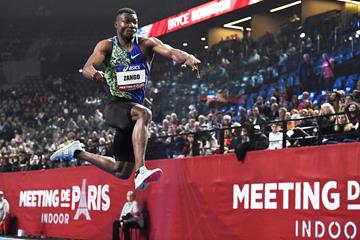 World bronze medallist Hugues-Fabrice Zango produced the jump of his life at the Meeting de Paris on Sunday (2), sailing out to an outright African triple jump record of 17.77m.

The 26-year-old from Burkina Faso opened his competition with 17.42m and then unleashed his record-breaking leap in round three. The fourth and fifth rounds were treated as a ‘semi-final’ with Zango taking on Yoann Rapinier in a two-round jump-off and Melvin Raffin facing Benjamin Compaore in the other semi.

The two semi-final winners, Zango and Raffin, then clashed in the sixth and final round. Although Zango didn’t improve, his 17.47m leap cemented his status as the winner.

Zango’s 17.77m moves him to equal fourth on the world indoor all-time list and is just 15 centimetres shy of the world indoor record set in 2011 by his coach, Teddy Tamgho. It’s also 11 centimetres farther than the outdoor PB Zango set when taking bronze at the World Championships in Doha.

Like Zango, world indoor champion Andrew Pozzi got his 2020 campaign off to a flying start.

The 27-year-old Briton won the men’s 60m hurdles in a world-leading 7.52, following a 7.56 clocking in his heat. European champion Pascal Martinot-Lagarde was second in 7.62 with Aurel Manga third in 7.66. World decathlon record-holder Kevin Mayer had been due to compete but he withdrew after feeling some discomfort in his achilles tendon.

Double European U23 champion Jemma Reekie produced one of the biggest breakthrough performances of the indoor season so far as she broke the British indoor 800m record at the 4J Studios Championships in Glasgow on Saturday (1) with a time of 1:57.91.

European 1500m champion Laura Muir, Reekie’s training partner, led going into the final lap, having covered 600m in 1:28.70. But Reekie moved into the lead on the back straight and pulled away from the double European indoor champion before going on to win by a comfortable margin.

Reekie’s time is the fastest indoor clocking since 2006 and moves her to 11th on the world all-time list. It also takes half a second off the British indoor record set by Jenny Meadows in 2010.

World triple jump champion Yulimar Rojas got her 2020 campaign off to a promising start, leaping an outright PB of 6.59m in the long jump at the Copa Iberdrola meeting in Valencia. After opening with a foul, she went out to 6.53m in the second round before producing her PB mark in round three. Spain’s Fatima Diame was second with an indoor PB of 6.56m.

Over in the USA, Randolph Ross went to fourth on the world U20 indoor 400m all-time list with his 45.44 clocking at the Texas Tech Invitational. Jamal Walton won an earlier heat in 45.99, finishing 0.01 ahead of Bryce Deadmon.

Multiple world and Olympic long jump champion Brittney Reese tested her speed with a pair of 7.32 clockings in the 60m, producing the same time in the heats and finals.