The 30-year-old from Bahrain, contesting just the fourth road race of her career, went out fast. By the time she reached the half-way point in 14:46, she had a five-second lead over Kenyan duo Celliphine Chespol and Agnes Tirop, who last month set a women-only world record of 30:01 for the 10km distance.

Ethiopia’s Dawit Seyaum also passed through half way inside 15 minutes, but she soon started to drop back. The challenge from Chespol and Tirop also gradually faded, leaving Gezahegne with a significant lead.

Gezahegne covered the second half in 14:51, crossing the finish line in 29:38 to take five seconds off Joyciline Jepkosgei’s world record set in Prague in 2017. Tirop finished second in 30:20, eight seconds ahead of steeplechase specialist Chespol. Seyaum was further back in fourth, clocking 31:25.

In the men’s race, world half marathon record-holder Kibiwott Kandie had fellow Kenyans Felix Kipkoech and Boniface Kibiwott for company as he passed through half way in 13:28. The pace increased in the second half, which was enough to break Kibiwott, leaving Kandie and Kipkoech to duel for the top spot.

Kandie, always a strong finisher, came through to take the victory in 26:51, finishing six seconds ahead of Kipkoech. Kibiwott held on for third in 27:13. In fourth, Pietro Riva set an Italian record of 28:06.

Chelimo and Kbrom take the spoils in Valencia

The 28-year-old Chelimo moved to equal third place on the world all-time list thanks to a 29:50 clocking – though just an hour or so later she had been bumped down to equal fourth on the list, following Kalkidan Gezahegne’s world record in Geneva – while 35-year-old Kbrom managed a huge career best of 27:39.

Perfectly paced by Spain’s José Ignacio Jiménez and Kenya’s Elkana Kibet Kwambai, the women’s race kicked off at the scheduled sub-3:00-kilometre pace in the hunt for the world record of 29:43 set by Joyciline Jepkosgei in 2017. During the early stages Dorcas Kimeli, a 29:57 performer, stuck closest to the pacemakers with fellow Kenyans Chelimo, Norah Jeruto and Rosemary Wanjiru – who won in 29:50 here last year – all close by.

That leading group covered the early kilometres just outside the required pace to attack the world best but proved to be too quick for Kimeli and then for Wanjiru who lost ground shortly after the fourth kilometre which was reached in 11:53.

The pace stepped up in the fifth kilometre as Chelimo and Jeruto reached the half-way point in 14:48, well inside world record schedule. Shortly after, Jeruto, who turned 26 the day before, just couldn’t live with the pace and from then on the race turned into a solo run for Chelimo.

Despite being accompanied by pacemakers until the end, Chelimo was unable to maintain her speed throughout the second half and she soon drifted off world record pace. An exhausted Chelimo reached the finish in 29:50 to obliterate her previous best of 30:57 set in Bolzano last December.

Jeruto, the world leader in the steeplechase this year, finished a distant runner-up in 30:08 while Sandrafelis Chebet came from behind to complete a Kenyan podium sweep in 30:45.

“The race was good,” said Chelimo. “I missed out on the world record, but at least I bettered my career best so I’m very satisfied.”

Without any pacemakers, the men’s race opened at an even 2:45-per-kilometre pace with a lead trio comprising Collins Koros, fellow Kenyan Ronald Kipotrich Kirui and eventual winner Kbrom, who clocked 1:00.07 at the Copenhagen Half Marathon two weeks ago. The lead pack reached halfway in 13:45 before Koros broke away to open a sizeable margin on Kbrom while Kirui ran alone in third.

When everything looked set to go in Koros’s favour, Kbrom reemerged during the final kilometre to pass the Kenyan and win in a lifetime best of 27:39, improving Jakob Ingebrigtsen’s Norwegian record by 15 seconds.

“I came to Valencia to break my PB and I managed to do so,” said a delighted Kbrom. “I also won the race, so I can’t ask for more. I’m grateful to my coach, manager and the organisers.”

Ayantu Kumela led an Ethiopian sweep of the women’s podium places at the Kosice Peace Marathon on Sunday (3), winning the World Athletics Label road race in a course record of 2:24:35.

Kenya’s Milliam Ebongon, winner in Kosice in 2018, led the women’s race in the early stages, but by the half-way point she had faded to fourth, almost a minute behind the Ethiopian trio of Kumela, Maeregu and Mekash.

The lead pack stuck together for most of the second half, but Mekash soon started to fade. With little more than a kilometre to go, Kumela started to edge ahead of Maeregu before going on to win in 2:24:35, smashing the previous course record of 2:26:01.

Maeregu (2:24:42) and Mekash (2:25:00) finished second and third respectively, while Maryna Damantsevich of Belarus overtook a tiring Ebongon in the closing stages to take fourth place in 2:32:22.

Kerio was part of a large lead pack in the early stages who set out in pursuit of the course record (2:07:01). Eight men remained in the group at the half-way stage reached in 1:03:44, but the pack was whittled down to five over the course of the next 10 kilometres.

Kerio ran at the back of the pack which was fronted by Uganda’s Jackson Kiprop and Ethiopia’s Deribe Robi, but he made a decisive move in the closing stages. With less than a mile to go, Kerio had shaken off the last of his opponents with Kangogo and Ethiopia’s Hiribo Shano battling it out for second and third place some 20 seconds behind. 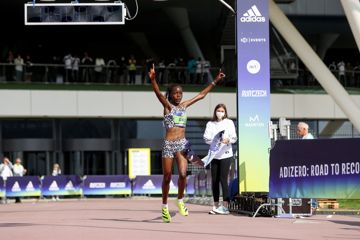