In ideal conditions for sprinting, Shericka Jackson produced a dazzling run to complete a magnificent sprint double on the final day of the Jamaican Championships in Kingston on Sunday (26).

When Jackson burst the tape at 21.55 (0.0m/s), the third-fastest 200m time in history, it simultaneously triggered a moment of utter disbelief and euphoria among the large crowd in the national stadium.

Drawn in lane six, Jackson flew off the curve ahead of the field, which included Olympic champion Elaine Thompson-Herah and world champion Shelly-Ann Fraser-Pryce.

With 50m to go, the race was over as the versatile Jackson opened up an insurmountable lead that widened with each stride. She now sits behind only world record-holder Florence Griffith-Joyner (21.34) and Thompson-Herah (21.53) on the women's world 200m all-time list.

“Honestly, I didn’t expect to run this fast,” said Jackson, who claimed Olympic 100m bronze in Tokyo and has three global 400m medals to her name. “I knew I was in good shape and when I spoke to the coach yesterday, he wanted a proper execution and the curve was one of the areas discussed. I think I did well on the curve, my coach told me to run the first 100m hard and do whatever I want afterwards. I am just grateful.”

Thompson-Herah, who claimed second, and Fraser-Pryce in third, recorded season's bests of 22.05 and 22.14 respectively.

The women’s 100m finalists endured a lengthy delay before the start due to an equipment malfunction. Once the race got under way, however, there was no stopping Jackson as she became the first Jamaican woman to win national titles at 100m, 200m and 400m.

“Last year was actually the first time I competed competitively in the 100m,” said Jackson, whose winning time was 0.01 off her lifetime best.

Just as she did at the NCAA Championships, Kemba Nelson produced a clutch performance to finish second in a PB of 10.88. “I feel great. It’s kind of unbelievable,” said Nelson, who recently graduated from the University of Oregon. “To get a PR on home soil running out of lane eight is a job well done. I had good execution during the race and there’s lots more to come, this is just the beginning.”

Meanwhile, five-time Olympic champion Thompson-Herah, who was third in 10.89, expressed mixed sentiments. “There was a delay, which was not our fault,” she said. “After warming up, I came here to compete, this is not a training session where you can go through the motions and honestly, I almost walked away, I only stayed because I wanted to qualify for the World Championships. I felt very flat after waiting so long, fought my way through the line, and was happy that I came third, which I didn’t know until afterwards.”

Earlier in the heats, four-time world 100m champion Fraser-Pryce teased the enthusiastic audience as she accelerated to 10.70 (1.1m/s). But the 35-year-old, who has a wildcard entry for the World Championships, was only required to make an appearance at the event and so simply walked out of her blocks in the semifinals.

The men’s 100m was a showdown between vastly experienced sprinter Yohan Blake, world champion back in 2011, and new members of the sub-10-second club Oblique Seville and Ackeem Blake.

All three men got off to a strong start and powered away from the rest of the field with a rejuvenated Blake claiming the win in 9.85 (1.0m/s), his fastest time in 10 years.

“You have to believe in yourself,” said Blake. “I’m the second-fastest man in the history of the sport. The naysayers kept me going, whenever they say I won’t make it or I should give up, I use that to fuel me and push through.”

Seville, who finished second in 9.88, was gracious in defeat. “My plan throughout the championships was to be calm and conserve for the finals,” he said. “I am pleased with the time because it’s close to my personal best. It was a tremendous run, although the only thing that went wrong was my execution, especially that last part where I got a little tight.”

Ackeem Blake was third with a personal best of 9.93.

The sprint hurdles, due to Jamaica’s large pool of talent, provided the usual excitement and disappointment. World U20 record-holder Britany Anderson overcame a sluggish start and found her rhythm to claim her first domestic 100m hurdles title in 12.53 (0.6m/s) ahead of Olympic bronze medallist Megan Tapper (12.60) and 2015 world champion Danielle Williams (12.66).

"I'm excited to be the national champion," Anderson said. “That’s the fastest gun I’ve ever heard, so my start wasn’t the best, however, I kept my focus and momentum going straight through to the finish.”

On the men's side, an intense battle between 2016 Olympic champion Omar McLeod and reigning Olympic champion Hansle Parchment was on the agenda in the 110m hurdles. The match-up fizzled midway as McLeod began to fade. Parchment, as is customary, got faster after the sixth hurdle, but a new threat appeared to his right in Rasheed Broadbell, who pushed him all the way to the tape. The Olympic champion prevailed in 13.14 (1.0m/s) over Broadbell (13.20) and Orlando Bennett (13.28), who both registered season's bests.

“It was raining a lot during warm-ups, but it was very warm,” said Parchment. “I prepared myself well and tonight I put together a decent race, although my coach will be correcting a few things. I wasn’t as powerful at the start as I would have liked, I slacked off a little bit, however, it was a good race overall.”

In the women’s 400m hurdles, Andrenette Knight looked on course to claim her first domestic title. That was until tragedy struck. Knight, who blasted from the blocks, took a considerable lead before smashing into a hurdle entering the home straight and fell out of contention. Janieve Russell assumed the lead that she never relinquished, winning comfortably in a season’s best of 53.63. Shian Salmon ran strong to finish second in 53.82, a personal best.

“I am feeling really good, words can’t explain,” said Russell. “I believe I’m ready and I’m going to the World Championships with a lot of confidence.”

A tense finish in the men’s 400m hurdles enthralled spectators, with Jaheel Hyde, who ran with sustained willpower, adrenaline and relentless strength until the last two hurdles, just holding off a strong challenge from Kemar Mowatt - 48.51 to 48.53.

World champion Tajay Gayle, who has a wildcard entry for the World Championships, struggled to get going in the men’s long jump. He started badly, fouling his first two attempts followed by two sub-eight-metre efforts in the third and fourth rounds before things got worse in the fifth round when he landed awkwardly after another fouled attempt. It took 10 agonising minutes before Gayle, after receiving medical attention, exited the pit in a laboured manner. Gayle was unable to continue and passed in the sixth round.

Wayne Pinnock won the event, his first senior long jump title, after cutting the sand at 8.14m (0.7 m/s) in the first round. However, after feeling some discomfort, he too decided to pass on the next five rounds.

In the absence of the injured Fedrick Dacres, Travis Smikle won the men’s discus with 65.73m. 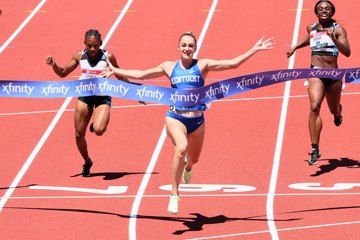 Steiner storms to 200m win at US Championship...