Botswana’s Isaac Makwala sped to the fastest ever one-day double over 200m and 400m at the Resisprint International meeting in the Swiss city of La Chaux-de-Fonds on Sunday (6).

The African champion already held national records at all three sprint distances, but he obliterated his 400m PB with 44.01. Not only does it take him to 11th on the world all-time list, it also improved on Gary Kikaya’s African record of 44.10 set in 2006.

Compatriot Pako Seribe finished second in 45.21, just 0.17 away from the PB he set earlier this year.

Just 90 minutes later, Makwala was back on track for the 200m. Despite a slight -0.4m/s headwind, the 27-year-old sped to another national record, stopping the clock at 19.96. The performance takes him to third on the African all-time list.

Makala, who finished fourth at the IAAF Diamond League meeting in Rome last month, is now hopeful of defending his African 400m title. Should he succeed in doing that, he will earn a team spot for the IAAF Continental Cup in Marrakech later this year.

Elsewhere in La Chaux-de-Fonds, three-time world finalist William Sharman won the 110m hurdles in 13.28 (0.6m/s), also breaking the meeting record to win by more than half a second.

US long jump champion Jeff Henderson, winner of the IAAF Diamond League meetings in Lausanne and New York, found a leap of 8.10m sufficient to win before passing his three final attempts. 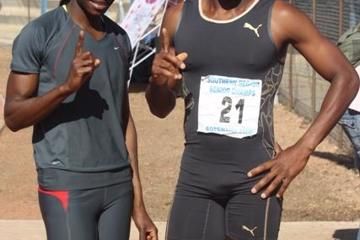