Justyna Swiety-Ersetic at the World Relays in Yokohama (© Getty Images)

Poland dethrones US women in 4x400m..

After victories in each of the three previous editions of the IAAF World Relays, the US was finally knocked from its pedestal in the women's 4x400m where an inspired Polish squad took the evening's first title after Justyna Swiety-Ersetic successfully fought off a three-pronged attack down the homestretch.

Propelled by a 52.5 opening lap, Jaide Stepter gave the US quartet the early lead, heading Jamaica, Italy and Poland into the first exchange. Shakima Wimbley extended the lead for the Americans on the second leg, while behind her, Patrycja Wyciszkiewicz moved Poland into second with Italy another half second behind in third.

But things began to unravel for the US squad over the final 40 metres of the third leg, where Anna Kielbasinska brought Poland into the the lead, drafting Jamaican Tiffany James and Italy's Giancarla Trevisan past Jessica Beard of the US.

Swiety-Ersetic, the European 400m champion, then took command, padding her lead down the back straight, seemingly preparing for the pressure that lay ahead. Four teams were in contention as the field came off the final turn, but as hard as US anchor Courtney Okolo, the world indoor champion, tried to chip away at the deficit, the Pole fought back and ultimately held on to bring her triumphant squad to the line in 3:27.49. Okolo won the battle for second over Italian anchor Raphaela Boaheng Lukudo by 0.09 in 3:27.65.

More bad news for the US followed in the men’s 4x400m, where its three-edition run in that event came to an unceremonious conclusion in another battle that came down to wire.

Nathan Strother got the quartet off to a good start with a 45.7 opening leg, 0.20 ahead of Jamaica and Trinidad & Tobago. Fred Kerley, the 2018 IAAF Diamond League champion, extended it to 0.60 after the second leg before Michael Cherry padded it to nearly a full second by the time he handed off to anchor Paul Dedewo.

But Trinidad and Tobago's anchor Machel Cedenio was undaunted. Giving chase, he shaved a couple tenths from the gap as he entered the final turn, before flying off the bend, chipping away at Dedewo's lead with every stride. But even 40 metres from the line, the gap seemed too wide to breach. Cedenio forged on nonetheless, eventually catching and passing Dedewo as they reached the line, the American falling to the ground in exhaustion before learning that his team would be disqualified for a lane violation. Trinidad & Tobago clocked 3:00.81, a world lead, while Cedenio split 44.41, the fastest lap of the race.

Following the USA's exit, Jamaica, which clocked 3:01.57, was elevated to second with Belgium third in 3:02.70. Another two steps back, Japan clocked 3:03.24, one of the host nation's two fourth-place finishes on the the day.

With the top ten teams earning qualification to the IAAF World Athletics Championships Doha 2019, the last were decided in the B finals. The women's went to the Netherlands and Belgium, who clocked 3:29.03 and 3:31.71, respectively and the men’s to Italy and France who clocked 3:02.87 to 3:02.99. With the US squad disqualified in the A final, the Czech quartet, which finished third, also earned qualification to Doha.

The momentum shifted however in the mixed 4x400m, with the US producing a convincing victory.

My'Lik Kerley, Fred's younger brother, gave the US a slight lead after the opening leg, one they never relinquished as darkness finally descended on the cool Yokohama evening. Each team decided to run women on legs two and three; for the US that was Joanna Atkins and Jasmine Blocker, who combined their efforts to hand anchor Dontavius Wright a 1.6 second lead. He held it en route to a 3:16.43 win, well clear of runner-up Canada who clocked 3:18.15. Kenya was third in 3:19.43 for its only top-three finish of the weekend.

4x200m titles for France and USA

There was an upset as well in the women's 4x200m with France taking best advantage of a slew of sloppy exchanges behind them.

The worst offender of the night was Jamaica, whose first exchange between Olympic champion Elaine Thompson and Stephenie Ann McPherson nearly knocked the squad out of the race. By the time anchor Shericka Jackson managed to regroup, she was trailing France, China and the US as the four approached the final straight.

By then Maroussia Paré was out of reach, the Frenchwoman crossing the line in 1:32.16, a national record, with China second in 1:32.76, an Asian record. The US, who was third across the line, was disqualified here as well for exchanging out of the zone, elevating Jamaica, who clocked 1:33.21, to third.

The men’s race went more according to script, with the US prevailing in this contest for the first time.

Christopher Belcher, Bryce Robinson, Vernon Norwood and Remontay McClain teamed for a 1:20.12 win, holding off a strong South African squad, anchored by African 100m champion Akani Simbine, who clocked 1:20.42. That broke the African record for the second time in less than two hours. Germany was third in 1:21.26, another national record.

The women's 4x100m was much closer, with Aleia Hobbs of the US barely holding off Jamaica's fast-closing anchor Jonielle Smith to win by just 0.02 in 43.27, taking the event for the first time since the inaugural edition in 2014.

Germany, the winners in Nassau two years ago, were a distant third in 43.68, just ahead of Brazil who clocked 43.75.

But the Brazilian men's squad pulled off the biggest upset of the night in the evening-capping 4x100m.

Rodrigo do Nascimento, Jorge Vides, Derick Silva and Paulo André Camilo de Oliveira teamed to beat a strong US quartet - which included world 100m champion Justin Gatlin on leg two and Diamond League 200m champion Noah Lyles on anchor - in 38.05, with de Oliveira holding off Lyles' powerful finish by just 0.02. Had the race been five metres longer, the finish may have gone the other way.

It was the South American giant's third fastest performance, signalling that the host of the last Olympic Games could be a force in the next Games that will be contested in just over a year about 30 kilometres to the north.

The battle for third was even closer. Great Britain and Northern Ireland clocked 38.15 to get the nod by a scant 0.01 ahead of China.

The session began with a medal reallocation ceremony for the men's 4x100m relay from the 2008 Olympics during which the Japanese quartet of Naoki Tsukahara, Shingo Suetsugu, Shinji Takahira and Nobuharu Asahara received the silver medal after being elevated to second place after Jamaica's disqualification. 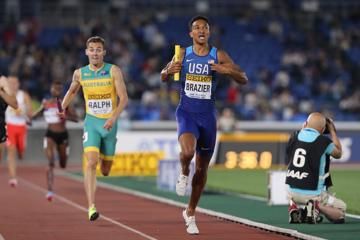 US dominates on night of dramatic event debut...