World 400m bronze medallist Fred Kerley set his fifth 100m PB of the year, smashing through the 10-second barrier for the first time in his career to clock 9.91 (2.0m/s) at the TRUFit Sprint Classic in Miami on Saturday (24).

His improvement continued today in Miami. After a comfortable 10.16 run in the heats, he followed it with a world-leading 9.91 run in the final, finishing a metre clear of Joshua Washington (10.01) and Jamaica’s Julian Forte (10.03).

Kerley now becomes just the third man in history to have broken 10 seconds for 100m and 44 seconds for 400m, joining Wayde van Niekerk and Michael Norman in that exclusive club.

He has thrown farther on just five other occasions.

Over in China, world indoor silver medallist Su Bingtian recorded his first sub-10-second clocking of the year, winning the 100m in 9.98 at the East China District Meeting in Zhaoqing on Saturday (24).

The national record-holder attacked the early stage of the race and quickly built up a lead over the rest of the field. Xie Zhenye ran well in the second half, seemingly matching Su’s pace, but he remained a couple of strides behind to finish in 10.16.

Asian bronze medallist Song Jiayuan smashed through the 19-metre barrier for the first time in her career to win the shot put with 19.32m. Meanwhile, world bronze medallist Lu Huihui won the javelin with 64.40m. She took just one throw, then passed the rest of her attempts.

Competing for the first time since his fifth place at the 2019 World Athletics Championships in Doha, Darrell Hill threw 21.76m to win the shot put.

In his first outdoor long jump competition of the year, JuVaughn Harrison picked up from where he left off indoors, leaping a world-leading 8.44m (0.8m/s) at the LSU Alumni Gold meeting in Baton Rouge on Saturday (24).

The 21-year-old had improved his personal best to 8.45m at the NCAA Indoor Championships in March as part of the best ever single-day long jump and high jump double he achieved, which also saw him clear 2.30m.

This time the Louisiana State University student athlete improved his outdoor long jump best by 24 centimetres, and before that 8.44m leap in the fourth round he also jumped 8.18m (1.5m/s) and a wind-assisted 8.15m (3.4m/s).

World pole vault record-holder Mondo Duplantis also achieved a world lead at this early stage of the season, clearing 5.90m before having one attempt at 6 metres.

Noah Williams stormed to a world-leading time of 44.30 for a big PB in his first outdoor 400m since 2019. Bryce Deadmon, who had gone into the race as world-leader with 44.62, further improved with another PB of 44.58 in second.

A close women’s 400m saw Charokee Young and Favour Ofili both run PBs of 51.49, with Young getting the nod for victory. 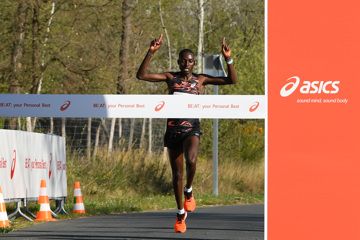 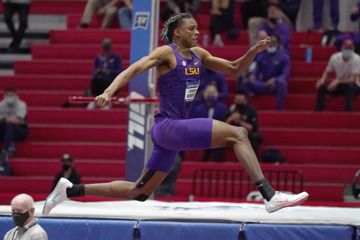