Volkov vaults to U20 title, while Ignatyeva dominates discus on day three in Nairobi

A last-gasp clearance at 5.45m by Belarus’s Matvei Volkov to take gold in the men’s pole vault proved a thrilling climax to the third morning of action at the World Athletics U20 Championships Nairobi 21 on Friday (20).

The 17-year-old, who won silver at the European U20 Championships last month, moved one step higher on the podium here to deny Finland’s Juho Alasaari and continue his family’s long legacy of world-class vaulting.

Volkov’s father, Konstantin, was an Olympic silver medallist in the pole vault for the USSR in 1980 and his late grandfather, Yuri, ran the pole vault institute in Irkutsk, Russia, that produced a litany of world-class vaulters.

Konstantin has coached his son throughout his career and he was again trackside in Nairobi, enduring nervous moments as his son failed twice at 5.45m. Volkov had entered the competition at 5.30m and joined South Africa’s Kyle Rademeyer at the head of the standings, both men soaring clear at the first attempt. Alasaari skipped 5.30m and needed three attempts to go clear at 5.35m, but when he did it catapulted him into gold medal position, with Rademeyer passing 5.35m and recording three subsequent failures, while Volkov skipped both 5.35m and 5.40m.

Gold looked to be headed to Finland after Volkov’s two misses at 5.45m but the Belarusian snatched victory with his last clearance, with Alasaari taking silver with 5.35m and Rademeyer bronze with 5.30m.

“I like pressure,” said Volkov. “I felt by myself what I needed to change (for the final attempt) and my father just gave me a kick, ‘let’s jump.’”

Volkov’s gold capped a fine end to a difficult season, given he missed three weeks of training in June after a training accident that caused a heel injury.

His father also believes there is much more to come. “In winter he jumped very high,” said Konstantin. “Next winter you will see a new man.”

In the women’s discus final Violetta Ignatyeva, an authorised neutral athlete, was a dominant winner, her 57.12m opening round effort more than good enough for gold, but she went farther in the fifth round, throwing 57.84m.

“I’m really grateful to my coaches and the entire team that made it possible to take part in this,” she said. “It’s even better that I managed to win gold.”

Silver went to South Africa’s Mine de Klerk who threw an African U20 record of 53.50m while Belarus’s Alina Nikitsenka took bronze with 51.47m. 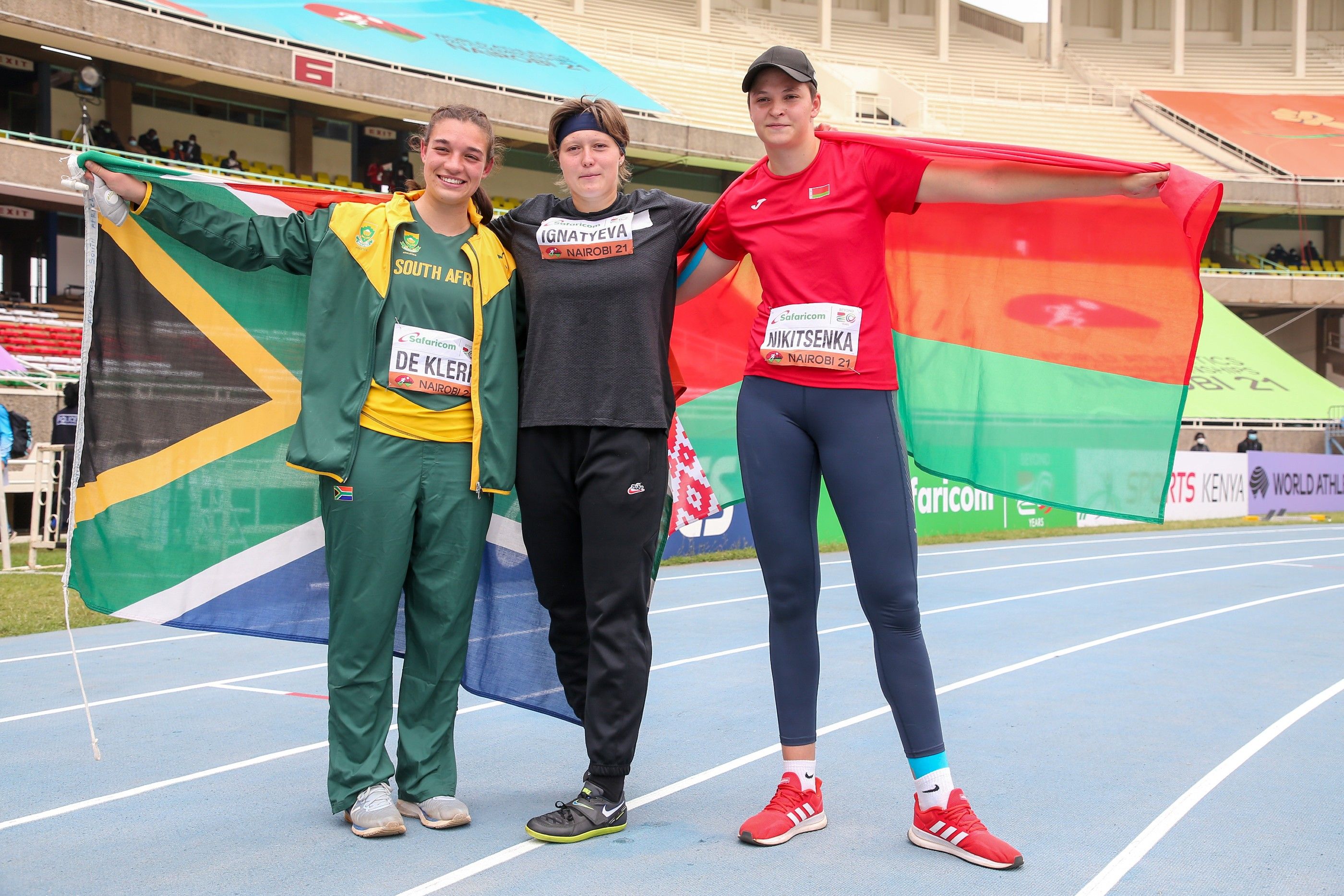 “This makes me really emotional,” said De Klerk. “I dedicate it to my grandmother who passed on in June. She supported me since I started doing track and field competitions and I just wanted to make her proud.”

After three events in the decathlon, Belgium’s Jente Hauttekeete leads the way on 2632 points ahead of Czech Republic’s Frantisek Doubek (2522) and Spain’s Jose San Pastor (2444).

In the men’s 110m hurdles, French star Sasha Zhoya started his campaign with a signal of intent, producing a slick display of hurdling and coasting to the line in 13.12 (0.3m/s), the world U20 record of 12.99 looking within reach ahead of this evening’s semifinal and tomorrow’s final.

“I’ve been waiting for the championships for so long so it’s fantastic to get going,” said Zhoya. “I’m not very much concerned with the time because my target is to win gold in the finals. As a European champion, the weight of expectation will not weigh me down.”

Switzerland’s Ditaji Kambundji was the quickest in the women’s 100m hurdles heats, the younger sister of senior sprint star Mujinga coasting to victory in 13.30 (0.1m/s). Also impressing was Jamaican star Ackera Nugent who clocked 13.35 (-0.6m/s) to win her heat and her teammate Oneka Wilson who clocked a PB of 13.36 (0.2m/s). There were also wins for Poland’s Marika Majewska (13.58) and South Africa’s Marione Fourie (13.64).

The women’s 1500m heats saw Kenya and Ethiopia duke it out at the front of both races, with Ethiopia’s Diribe Welteji leading the field home in the first heat in 4:26.26 ahead of Kenya’s Winnie Jemutai (4:26.47). “Now that I have qualified for the final my target is to win a medal for my country,” said Jemutai. “I feel the pressure but it will be a good way to honour the fans.”

In the women’s 200m heats Namibia’s Beatrice Masilingi was quickest, taking victory in 22.65 (0.2m/s) just 17 hours after winning silver in the 100m. “I felt a bit fatigued and I am a little surprised I ran that good,” she said. “Yesterday’s success is now passed, I am gearing up for the remaining 200m races.”

Her compatriot Christine Mboma, the Olympic silver medallist, breezed to victory in 23.23 (0.2m/s). Nigeria’s Favour Ofili was impressive when taking her heat in 22.74 (0.1m/s) while there were also wins for Jamaica’s Brianna Lyston (23.18) and South Africa’s Viwe Jingqi (23.84).

In women’s high jump qualification there was no need for the bar to ascend to the automatic qualifying height of 1.85m, with 11 athletes clearing 1.78m. They will be joined in the 13-women final by Belgium’s Merel Maes and Romania’s Federica Gabriella Apostol who had a best of 1.74m.