Shot putter Tom Walsh of New Zealand and Grenadian decathlete Lindon Victor successfully defended their titles on the fourth day of stadium track and field action at the Commonwealth Games in Birmingham on Friday (5).

Walsh, fired up by missing out on a medal by one place at the World Athletics Championships Oregon22, made his intentions known from the outset and opened with 21.98m. That mark would have ultimately been enough to win, but the 2017 world champion produced a consistent series and ended with a best of 22.26m in the final round – better than his winning throw from 2018.

Like Walsh, Jamaican triple jumper Shanieka Ricketts put down a big marker in the first round. The two-time world silver medallist bounded out to a Games record of 14.94m with her opening jump of the competition.

In fact, the medal positions were decided in the first round as Thea LaFond opened with 14.39m, ultimately enough for silver, and England’s Naomi Metzger started her series with 14.32m and improved to 14.37m to secure bronze.

While Walsh and Ricketts won their disciplines with relative ease, the decathlon became a thrilling three-way battle between Victor and Australian duo Cedric Dubler and Daniel Golubovic.

Victor led from the outset, thanks to a 10.76 clocking in the 100m, but was put under pressure by Dubler for most of the competition. The duo had the same number of points after the long jump, but Victor pulled ahead thanks to a 15.48m shot put. Dubler narrowed the gap after clearing 2.06m in the high jump and running 48.47 in the 400m, then the Australian took the lead after the first event of the second day, courtesy of a 14.20 run in the 110m hurdles.

Victor regained the lead after the discus (46.54m) but Golubovic moved into the top three with his 49.85m effort. Dubler once again took the lead after clearing 5.00m in the pole vault, but Victor and Golubovic were still close behind. A 65.16m javelin throw gave Victor a 161-point lead going into the 1500m, but it wasn’t inconceivable that Dubler and Golubovic – both superior 1500m runners to Victor – could make up most of that deficit.

Golubovic led the 1500m from start to finish and crossed the line way ahead of his rivals, clocking 4:30.95. Dubler followed 20 seconds later, then Victor staggered over the line in 4:51.60 – just enough to hold on to pole position. The Grenadian won with a score of 8233 with Golubovic taking silver (8197) and Dubler bronze (8080).

In the women’s 3000m steeplechase, Kenya’s Jackline Chepkoech upstaged Olympic champion Peruth Chemutai after the Ugandan hit a barrier on the penultimate lap. Chemutai got back up, but was overtaken by England’s Liz Bird on the last lap, while Chepkoech was away and gone, charging home to win in a Games record of 9:15.68.

The evening session on Thursday (4) reached a peak with the men’s 110m hurdles final. Despite the late withdrawal of Olympic champion Hansle Parchment, the title remained in Jamaican possession as Rasheed Broadbell sped to victory in 13.08, equalling the Games record that had stood to Colin Jackson since 1990.

In one of the closest contests of the Games so far, just three centimetres separated the top four finishers in the men’s long jump. Laquan Nairn of The Bahamas won on countback from India’s Sreeshankar, both men leaping a best of 8.08m. South Africa’s Jovan van Vuuren earned bronze with 8.06m, just one centimetre ahead of Jamaica’s Shawn-D Thompson. 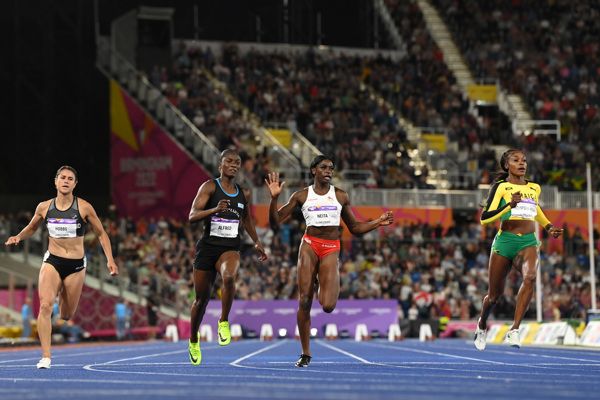 Thompson-Herah and Kiplimo victorious on open...

Chesang and Kangogo win after dazzling debuts at Sierre-Zinal