Cheserek the star at the Penn Relays' penultimate day

University of Oregon’s Edward Cheserek played a starring role at the Penn Relays in Philadelphia, the 21-year-old Kenyan running a composed mile leg in the distance medley relay, at the end of which he kicked away from Villanova’s Jordan Williamsz to give Oregon their second consecutive title on Friday (24).

“I was prepared,” said Cheserek. “I was just waiting for (Williamsz) to take the lead a little bit. I stayed with him and saved energy for the last 200 metres. My coach told me to sit in second and make the move on the last lap when you feel strong.”

Oregon’s lead-off runner Gregorek, whose father John anchored Georgetown to victory in the same event at the 1982 Penn Relays, winning allowed him to emulate his father’s achievement.

“It feels great,” he said. “I've always looked up to my dad as a runner. Slowly over the years, I've realised how cool some of his accomplishments here were. I'm happy to keep the tradition going.”

Over 39,000 were in attendance at Franklin Field for the penultimate day of the Relays as a total of 98 events played out in glorious spring sunshine.

Another Oregon star to help her team to victory was Jenna Prandini, who ran the second leg (200m) of the college sprint medley championship.

Thanks to a battling anchor leg from Leblanc – who edged Clemson’s Natoya Goule in a home-stretch duel – Oregon took and narrow victory and got to lift the famed championship wheel, running 3:44.59 to Clemson’s 3:44.71.

“When I saw that straightaway, I just gave it my all,” said Leblanc. “I could feel the energy of my team mates and my coaches. It's amazing. Once we get the wheel in our hands, I think I'll start realizing it. I'm just really, really happy.”

The men’s sprint medley relay saw Penn State take a narrow victory over Louisiana State University, 3:21.29 to 3:21.95, with Brannon Kidder’s 1:48.90 800m anchor leg playing a pivotal role. “I just wanted to be the first one to go and i thought I could survive so I did,” said Kidder. “My team put me in a good spot so I had to try and win it for them.”

In the college women’s 4x1500m relay, favourites Stanford took their first title in nine years, with Elise Cranny’s third leg of 4:17.2 effectively ending the race as a contest. Stanford ran out comfortable winners in 17:27.54 ahead of North Carolina (17:30.22).

Texas A&M took a decisive win in the college women’s 4x100m relay, anchor Aaliyah Brown powering down the home straight and bringing them home to victory in 43.76. University of Texas finished second in 44.36

“We came out here and dominated,” said Brown. “It was a great feeling. I came here in high school but it’s nothing compared to this environment on a collegiate team that’s well known.”

The all-coming Jamaican high schools proved all too strong for their American counterparts in the high school sprint relays, with Edwin Allen High School winning the girls 4x100m relay in 45.40, and the same school taking a comfortable victory over Vere Technical in the 4x400m with a win in 3:40.41.

Andrew Hunter of Loudoun Valley, Virginia proved himself a class apart in the boys’ championship mile, coming home an easy winner in 4:07.15.

In the field events, Darrell Hill narrowly missed the Penn Relays record when reaching 20.79m to win the college men’s shot put and Trevor Detillion was an equally dominant winner of the high school boys’ discus throw with a best of 62.04m.

Jordan Geist was also impressive when winning the high school boys shot put with a best effort of 20.45m.

The Penn Relays conclude on Saturday with the professional athletes taking centre stage for the USA vs. the World sprint relay events.

With many of USA’s best sprinters slated to compete, it will serve as the perfect appetiser ahead of next weekend’s IAAF World Relays in the Bahamas.

BACK
Pages related to this articleAthletes
Jenna PRANDINI 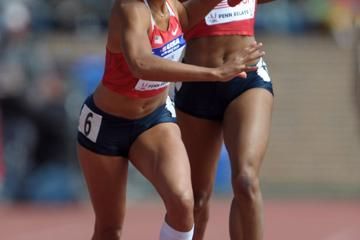 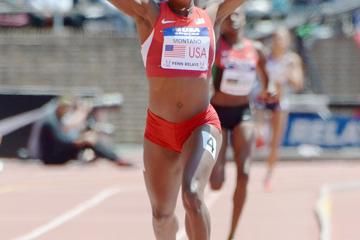 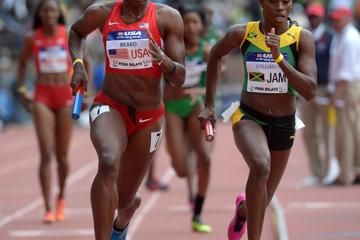 Penn Relays serve up tasty appetiser for next...