Barega's shoelace came undone at the start of the race, costing him about 40 metres on his main opponents. The pace was slow on the first lap and Barega managed to catch up with a big group formed by Gebrhiwet, Uganda’s Albert Chemutai, Britain’s Ross Millington and Italy’s Yohanes Chiappinelli, Yemaneberhan Crippa, Daniele Meucci and Pietro Riva.

The lead pack ran at a conservative pace, going through the first two-kilometre lap in 6:06 and the second lap in 12:06.

Chemutai, who finished fourth in the steeplechase at the IAAF World U20 Championships Tampere 2018, increased the pace at halfway. The lead pack was whittled down to Chemutai, Gebrhiwet, Barega and Crippa. European 10,000m bronze medallist Crippa managed to keep pace with the African trio until the third lap.

Chemutai went through at the bell in 23:52, closely followed by Gebrhiwet and Barega. Crippa followed in fourth place, two seconds behind. Meucci, who is in full training for the Rome Marathon and the World Championships in Doha, was in fifth.

Gebrhiwet broke away from Barega and Chemutai on the final lap with one kilometre to go. By the time Gebrhiwet reached the finish line, which he crossed in 29:18, his lead had grown to four seconds.

Barega, who became the fourth fastest 5000m runner in history when he clocked 12:43.02 in Brussels last year, finished second in 29:22 edging Chemutai by one second. Crippa finished fourth in 29:56, the best result of his career in San Giorgio su Legnano. Meucci completed the top five in 30:11.

After earning world 5000m bronze in 2013, world silver in 2015 and Olympic bronze in 2016, Gebrhiwet is bidding to win his fourth global medal at the IAAF World Athletics Championships Doha 2019.

“I was aware that Barega had a problem at the start,” said Gebrhiwet. “I decided to increase the pace on the final lap because I knew he would be very strong in a sprint. I built a good margin, which proved to be enough to win the race. I will not run in other cross country races, but I will focus on some indoor competitions.”

“The problem with my shoes was my mistake. It had never happened in my career,” said Barega. “Luckily I managed to close the gap. It was a good race. I will now run in Elgoibar before a period of training in Ethiopia to prepare for the Ethiopian Cross Country Trials for the World Cross Country Championships in Aarhus.”

Can a class apart

A quartet formed by Yasemin Can, Caroline Chepkemoi, Silenat Yismaw and European 10,000m champion Lonah Chemtai Salpeter took the lead in the early stages and went through the first lap in 6:32.

Can, the 2016 European 5000m and 10,000m champion, pulled away during the second lap, building up a lead of 12 seconds over Yismaw and Chepkemoi. The Turk increased her gap over Yismaw to 16 seconds on the final lap and crossed the finish line in 19:21.

Yasemin Can wins the women's race at Campaccio

Marathon specialist Sara Dossena was the best Italian runner, finishing fifth in 20:24 ahead of European U20 cross-country champion Nadia Battocletti (20:51).

“It is a spectacular cross-country race,” said Can. “I am happy to start my season in San Giorgio su Legnano. Cross country races are among my favourite events and this year’s race was similar to a track race with these warm and dry conditions. I ran at a fast pace to take a good lead.

World U20 5000m silver medallist Stanley Mburu Waithaka won the men’s race at the Cross Zornotza in Amorebieta on Sunday (6), becoming the first Kenyan man to win in the Spanish town for five years.

He was pushed all the way to the finish, though, as Ugandan 17-year-old Oscar Chelimo was given the same time as the winner, 31:58. Kenya’s Solomon Boit made it an all-teenage podium as he finished third in 32:03.

Trihas Gebre successfully defended her title in the women’s race, clocking 30:36 to lead a Spanish sweep. Veteran duo Elena Loyo and Maitane Melero were a distant second and third in 31:28 and 31:30 respectively.

Bahrain’s Albert Rop and Alia Saeed Mohammed of the United Arab Emirates were the winners of the high-quality senior races at the Arab Cross Country Championships in Amman on Saturday (5).

Rop, the Asian 5000m record-holder, won the senior men’s title in 29:48 to finish three seconds ahead of compatriot John Koech. Morocco’s Mouchine Outalha was third in 30:05.

Mohammed successfully defended her title in 34:49 from world U20 steeplechase silver medallist Winfred Mutile Yavi of Bahrain, who was a distant second in 35:19. Bontu Edao was third in 35:46, helping Bahrain secure the women’s team title. 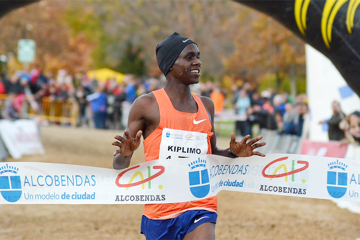