A close finish between Joyce Chepkirui and Emily Chebet produced the highlight of the ASICS Grand 10 in Berlin on Sunday (12).

In a photo-finish, both Kenyans were given the same time of 31:02 as Chepkirui was given the verdict over the two-time world cross-country champion. Margaret Wangari made it an all-Kenyan podium with a fine 31:06 for third place.

Chepkirui and Chebet ran fast from the start, passing 5km inside world-record schedule with a split of 15:07. The pair had set out to attack Paula Radcliffe’s 11-year-old mark of 30:21 on the flat Berlin course, but after hitting a headwind in the second half, they realised that a world record was out of the question.

The pace dropped and both women switched their focus to the victory. In a dramatic finish, both athletes sprinted to the tape, resulting in a photo-finish.

It was difficult to see who won, but Chebet later confirmed the official result: “Joyce was a little bit ahead of me.”

“Unfortunately the wind was too strong for a record today,” said Chepkirui, who holds the course record of 30:37. “But I will try to break the world record again in the future. And I would like to come back to Berlin next year to have another go.” Chepkirui will now prepare for the Honolulu Marathon in December.

Although she missed her personal best by just four seconds Chebet was still happy with her performance, taking three seconds off her PB to move to third on this year’s world list.

“Without the wind, we would have been faster,” said Chebet, who now plans to run a half marathon in Valencia next Sunday. “Next year it is my goal to defend my world cross-country title.”

Wangari’s third-place finish in 31:06 meant that for the first time in history, three women ran sub-31:10 in the same 10km race.

There was a considerable gap behind the podium finishers. Germany’s Katharina Heinig, daughter of former world and Olympic marathon bronze medallist Katrin Dorre-Heinig, took fourth place with a personal best of 33:31. Fifth place went to 17-year-old Alina Reh, who broke the German under-18 record with 33:32.

In the men’s race, a group of four runners – Kinde Atanaw, Reuben Maiyo, Wilson Too and Germany’s Arne Gabius – passed the 5km mark in 13:48. The group broke up little more than a kilometre later, with Atanaw taking the lead.

The Ethiopian kept going strong with some wind now slightly slowing the elite runners. With a finishing time of 27:49 the 21-year-old, who has a PB of 27:36, ran his third-fastest 10km time and the fastest in a German 10km race this year.

Gabius, who is preparing for his marathon debut in Frankfurt in two weeks’ time, showed fine form, improving his 10km time to 28:08 for fourth place. He now is the third-fastest German runner of all time at this distance behind Carsten Eich (27:47) and Jens Karrass (27:53). Daniel Muteti of Kenya took fifth place with 28:57.

BACK
Pages related to this articleAthletes
Joyce Chepkirui 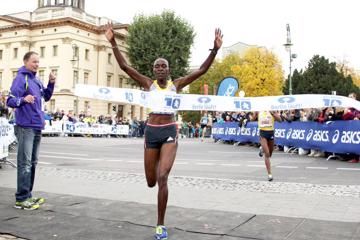