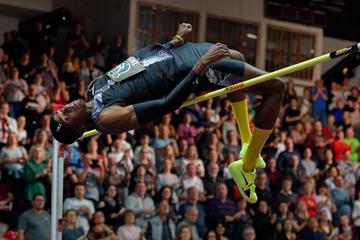 Cuba’s Luiz Zayas added three centimetres to his outright lifetime best when winning with 2.33m at the High Jump meeting in Banska Bystrica.

The Pan-American champion, contesting just the second indoor competition of his career, equalled the world-leading mark that had been shared between USA’s Darryl Sullivan and Britain’s Tom Gale.

Jamal Wilson of The Bahamas also claimed a share of the world lead when finishing second to Zayas on countback. The 31-year-old’s 2.33m leap was two centimetres higher than he had ever jumped before, indoors or out.

Zayas, who finished fifth in Hustopece three days ago with 2.27m, led throughout the competition in Banska Bystrica. After opening at 2.20m, he sailed over 2.25m on his first try. Wilson, Gale, Sylwester Bednarek and Edgar Rivera also had a clear card at that point, but the latter went out at the next height, 2.28m.

Wilson cleared 2.28m on his second try, while Gale and Bednarek needed all three attempts. Zayas, meanwhile, passed that bar and went straight to 2.31m, which he successfully negotiated with his first leap. Wilson did likewise with his second attempt and Gale needed one additional round before joining them.

In the groove, 2016 world U20 champion Zayas once again topped the bar at 2.33m on his first try. And, once again, Commonwealth silver medallist Wilson matched him on his second attempt. Gale, however, exited the competition at that point, unable to match the PB he set in Hustopece three days prior.

Zayas and Wilson were unable to get over 2.35m, but both men had enjoyed hugely successful evenings. They now move to second on their respective national indoor all-time lists. The only Cuban to jump higher than Zayas indoors is world record-holder Javier Sotomayor, while the only Bahamian to jump higher than Wilson’s mark indoors is 1995 world champion Troy Kemp.

Before today, Zayas’s PB stood at 2.30m, a height he cleared to win Pan-American gold last year and then equalled when finishing fifth at the World Championships in Doha.

The 18-year-old, who set a world U20 record of 2.02m (pending ratification) in Karlsruhe on 31 January, found 1.96m sufficient to win in Banska Bystrica.

Compatriot Iryna Herashchenko led for a brief moment thanks to a first-time clearance at 1.93m, a height that Mahuchikh got over on her second try and 2017 world silver medallist Yulia Levchenko needed three jumps for.

But when the bar moved to 1.96m, Mahuchikh was the only jumper to go clear, doing so on her second attempt before registering three unsuccessful tries at 2.00m.