Ayeko and Britton take the honours in Antrim

Mike Kigen, the Kenyan winner of the previous three years, did not return to Antrim this year but his absence hardly mattered as the 20-year-old Ayeko and  Kenya’s 2010 IAAF World Junior Championships 5000m winner David Kiprotich Bett had a tremendous battle for much of the race,  in ideal weather conditions over the 10.8km course.

Ayeko pulled away in the later stages to win in 33:08 while Bett, also 20, took second spot in 33:45. Andy Vernon lead the domestic challenge when he crossed the line in 33:59 for third.

Ayeko's victory, his first cross country win outside his native Uganda, was the 21st occasion an African athlete had won the men's race in the last 22 years of the Antrim event.

"Today was a tough, although I had something to spare over David in the end", said Ayeko. "It was important to start this race strongly from the off and thankfully I kept up a good pace."

Stephen Scullion had the best run of all the Northern Irish athletes on the day, finishing a good fifth in 34:52.

Britton had her third big win in little more than a month, following on from the retention of her European crown in December and her title at the Bupa Great Edinburgh Cross Country last Saturday, with another Antrim triumph, clocking 18:17 for the 5.6km race.

Britton led from the gun and held a 15-second lead over Britain’s Louise Damen at the end of the first of three main laps and had the luxury of being able to ease off slightly on the final circuit of Greenmount.

Damen closed slightly in the final kilometre to finish 12 seconds in arrears of Britton, whose task was made a little easier with the news on Friday that Britain’s 2012 European under-23 cross country champion Jess Coulson had withdrawn through injury.

"I planned just to go out hard from the gun and see how it went. The course was flat so It worked well. It's not my usual way to run, but you have to do different things sometimes," said Britton.

"I hadn't set myself a goal to run faster (than 2012, when the course was muddy), because you never know with cross country. Times don't mean anything all the time."

The large Greenmount crowd gave a sign of their approval to Britton even before the starting gun had fired, with a big round of applause in recognition of her recent run of form and her status as Europe’s top female cross country runner.

"It is nice when you are running at home, you know everyone, but in another way it puts on more pressure and you feel everyone is expecting you to do it I suppose. I really like it here because there are so many kids and it is nice to be able to inspire them to stick with running.

"It can be a lonely sport, but when you can see people succeeding it is more likely that you will be able to stick with it," she added.

Britton will now concentrate her efforts on indoor events in the coming weeks and plans to compete not only at the IAAF World Cross Country Championships in Bydgoszcz, Poland, on 24 March but also under cover over a shorter distance at the European Indoor Championships in Gothenburg earlier that month.

"I haven't done an indoor event for a while now. I haven't had much indoor training yet, I don't think many people have yet, but we'll see how it goes," she admitted.

Kenya's Magdalyne Masai finished third spot with 18:45, just holding off Britton’s colleague in a victorious Irish team at the European Cross Country Championships with Ireland's Linda Byrne close behind in 18:48.

Cóilín Duffy for the IAAF 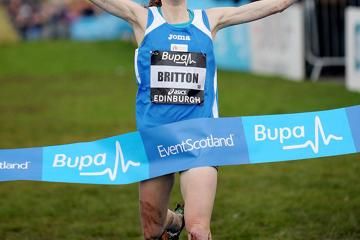 Ireland's Britton the favourite to retain her...