Moments before she became the first Australian woman to clear a high jump bar set at two metres, Nicola McDermott was worried about a shoe.

After missing her first attempt at 2.00m, McDermott wanted to move her run-up marker back half a shoe’s length. Her life-long coach Mick Horsnell couldn’t see it would make much difference. Nor could Australian head coach Craig Hilliard who was on hand for support. But they acquiesced, presumably because the one doing the jumping knows what is best.

Back the marker came. McDermott went through her normal pre-jump routine. In she raced, over she went and history was made, sailing over the Oceanian record and becoming the first woman to clear 2.00m outdoors this Olympic season. Whether or not half a shoe’s length made a difference, we’ll never know. But it sure didn’t hurt.

McDermott added one centimetre to the national record set by Eleanor Patterson last year. The pair had a series of memorable clashes then, but Patterson missed the Australian Championships with a leg injury and had to watch as her competitor won the race to two metres. Hopefully normal competition will be resumed between now and Tokyo.

McDermott had the bar raised to 2.03m, but missed three attempts at the height. The last one came close enough to suggest it is within her reach.

Jye Edwards’ step-by-step improvement this season culminated in a national title when he upstaged Stewart McSweyn to win the 1500m. Edwards had come down in two-second chunks to 3:35.46, which he ran in defeating all the national contenders but McSweyn almost three weeks ago.

Pre-race talk was that national record-holder McSweyn (3:30.51) would go hard at some point, either from the gun or over the second half of the race. It took only seconds for the race plan to unfold: McSweyn burst into the lead and ran through the first 400m within 56 seconds and 800m in about 1:52. Edwards clung to his heels as the pace eased to a shade under 59 seconds for the third lap and around the final bend.

Off the bend came the shock. Edwards moved out to launch his finishing burst, got to McSweyn’s side and, a few strides later, edged ahead. His 3:33.99 put him into the team for Tokyo as a winner with an automatic qualifying standard. McSweyn was second in 3:34.55 and Rorey Hunter third in 3:37.32. Edwards and Hunter are both coached by Dick Telford.

Dani Stevens took her 14th national title in the discus with a best distance of 62.74m, completing a domestic season comeback following two consecutive years with career-threatening back and neck injuries. She will also be confirmed in the Tokyo team and will complete her Olympic preparations in Australia.

Others to confirm Tokyo nomination on the final day of open competition were long jumper Brooke Stratton, sprinter Riley Day and Catriona Bisset, who retained her 800m title (last contested in 2019) with a win in 2:00.45. Kurtis Marschall, who no-heighted in the men’s pole vault, was nonetheless nominated to the team.

Ashley Moloney burst through into the top ranks of decathlon when he amassed 8492 points in his Queensland state championships late last year (20 December).

While not quite as impressive in Sydney, he took his first senior national title, winning six of the 10 events on his way to victory over training mate Cedric Dubler, scoring 8284. The pair train together under coach Eric Brown, who has been associated with most of Australia’s top decathletes for many years now.

So much for the similarities: over two days, however, the pair are polar opposites. Moloney has a marked edge on day one, Dubler comes home markedly the stronger over day two.

Moloney tallied 4512 on day one, to lead surprise packet Alec Diamond and Dubler comfortably. Dubler kept nibbling into the lead through the second day’s five events, including a 161-point swing in the pole vault and discus. Ultimately, he fell 109 points short with Diamond hanging on for third.

Moloney is an automatic nomination for the Tokyo team, the first Olympics for the 20-year-old. Dubler will go to his second Games as he already has achieved the qualifying standard and will be nominated.

Sprinter Rohan Browning is generating his own heat at the moment. Almost alone of those contesting the explosive events, he produced something close to his best in winning the 100m title in 10.09 (0.4m/s). In doing so, Browning reversed the result from two years ago (the 2020 championships were cancelled due to Covid), relegating the winner then, New Zealand’s Eddie Osei-Nketia, to second place more than two metres behind.

As he had already attained the Olympic qualifying standard of 10.05, Browning will be in his first Olympic team when he competes in Tokyo.

Otherwise, the throws, jumps and sprints appeared to be impacted by the unseasonably cool conditions. It was still, but the air temperature was uncomfortably cold. In the men’s high jump, Brandon Starc appeared vulnerable when he cleared only 2.20m, but his 2016 Olympic and 2019 World Championships teammate Joel Baden could go no higher than 2.15m.

In the women’s 400m, Bendere Oboya was a comfortable winner in 52.20. In the men’s event, the expected close battle between Steve Solomon and Alexander Beck delivered a close race, but Beck’s winning time was a moderate 46.41. The form man at 800m, Peter Bol, won his title in 1:49.27, though championships tactic also played a role there.

Two who defied the conditions, while at the same time confirming their spots in the Tokyo team, were pole vaulter Nina Kennedy and 1500m champion Linden Hall. Kennedy came into the final at 4.50m, where her clearance gave her the title, and progressed comfortably to 4.75m. She bowed out with three unsuccessful attempts at 4.85m, which would have been an improvement on her own Australian record.

Hall, who has run from the front throughout an outstanding domestic season, this time sat back in second or third place through the first two laps of the 1500m final. Picking it up from there, she covered her last two laps in approximately 2:07 to win in 4:07.56. In second place, Abbey Caldwell, who does not turn 20 until July, improved her previous best by almost two seconds in recording 4:08.67. At one stage on the last lap she was gaining ground on Hall, but the winner booted away again up the final straight.

The women’s javelin brought together world champion Kelsey-Lee Barber, who has been struggling for form this year, and 2018 world leader Kathryn Mitchell, who has hardly competed since due to injury. Mitchell produced a 63.34m first-round effort which stood up for the win. Barber showed her best form of the season to take second with a best of 61.09m and 2013 world U18 champion Mackenzie Little was also beyond 60 metres in third place at 60.90m.

Matt Denny also appeared to struggle with the conditions, though he still produced a throw of 63.88m to win the men’s discus.

BACK
Pages related to this articleAthletes
Nicola MCDERMOTT 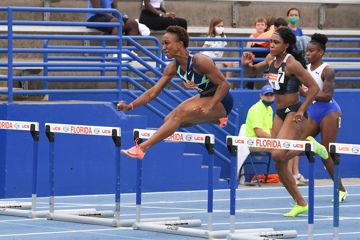 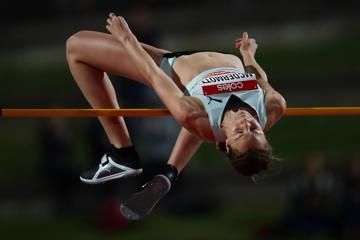