A 13th discus title for Dani Stevens, a ninth 100m hurdles honour for Sally Pearson, an 11th 400m hurdles gold medal for Lauren Wells – the usual suspects were up and about at the four-day Australian Championships on the Gold Coast which concluded on Sunday (18).

But it was young talent – best symbolised by 17-year-old Riley Day with a women’s sprint double – which caught the eye at Carrara Stadium which will host athletics at the 2018 Commonwealth Games in a little less than two months’ time.

Day may have been a little fortunate in the 100m, where the absence from the semi-finals and final of national record-holder Melissa Breen and the decision by Pearson to focus on hurdles only opened the event up.

But there was nothing fortuitous about her 200m victory in 22.93, the third-fastest by an Australian U20 athlete. The faster two, by Raelene Boyle (22.74) and Jennifer Lamy (22.88), were at high-altitude in the Mexico City 1968 Olympic Games. Of course, those performances brought silver and bronze medals, which out-rank national gold.

Other stand-out performances from emerging athletes included wins by 20-year-old Trae Williams in the men’s 100m, 21-year-old World Championships representative Morgan McDonald in the men’s 5000m, the discus/hammer double by 21-year-old Matt Denny and the eye-catching second place by Bendere Oboya in the women’s 400m.

The only two ahead of Oboya on the Australian U20 all-time list are Cathy Freeman and Jana Pittman, boasting one Olympic and four World Championship gold medals between them.

At 23, Cedric Dubler is approaching athletic middle-age. But he was in tune with the ‘vibe’ of young achievement with a personal best in the decathlon.

The combined eventers endured warm to hot conditions with high humidity, but Dubler set himself up with an outright personal best in the 100m, the first of the 10 events, ending day one with 4325 points. He held it together through the second day to tally 8229, an improvement of 115 points on his previous best, set in 2016.

The men’s 5000m, held on the first day of competition, boasted one of the strongest fields of the championships. No fewer than five men – Patrick Tiernan, David McNeill, McDonald, Stewart McSweyn and Sam McEntee – had represented Australia over 5000m, 10,000m or the steeplechase in Rio, London, or both.

And it was the 21-year-old University of Wisconsin athlete McDonald who emerged on top after a race set up by Tiernan. Few expected a fast pace given the oppressive conditions, but Tiernan settled into a series of 64-second laps from the outset. Unfortunately for him, he was left stranded in the lead.

Beyond 3000 metres it was down to Tiernan, McSweyn, McNeill and McDonald. The latter launched his drive for home down the final back-straight, sweeping past a tiring Tiernan. McNeill also passed the race-long leader with 200 metres to go and McSweyn got by on the bend.

Luke Mathews raced to a commanding victory in the 800m, coming home in 1:45.90 after reaching the bell in a tick under 54 seconds. The heats of the 800m were cut-throat, with only the winner guaranteed of progression to the final. One of the unluckiest to miss out, 19-year-old Joseph Deng, enlivened the otherwise meaningless B-final with an all-the-way win in 1:45.71.

Ryan Gregson looked hopelessly boxed as the men’s 1500m final swept on to the final bend. But he coolly dropped back to find clear ground, then sprinted around the field to win in 3:39.66, a stride ahead of World Championships teammate Jordan Williamsz.

After being out-kicked late the past two years, Linden Hall ran a strong last 500 metres to take the women’s 1500m, her first national title, in 4:07.55 ahead of Zoe Buckman. Brittany McGowan produced a personal best 2:00.24 to take the women’s 800m, the fastest by an Australian woman in almost 10 years.

In late 2014, teenaged Jack Hale ran a wind-assisted 10.13 in the national schools’ championships to ignite a new era in Australian men’s sprinting. Rohan Browning and Trae Williams finished just behind.

Oboya lost to Olympic semi-finalist Anneliese Rubie, but she lost no admirers in doing so. Another Olympic semi-finalist, Morgan Mitchell went out fast, but faded into the straight as Oboya and Rubie fought it out. Oboya, who does not run 18 until 17 April, got to the lead, but Rubie, coached by Cathy Freeman’s coach Peter Fortune, held her nerve and her form to edge back in front at the line, 51.94 to 51.96.

Of course, it’s hard to take the limelight off Sally Pearson on her home track and the world champion survived a long wait for a disqualified athlete to leave the track before winning the 100m hurdles in 12.73. It was Pearson’s ninth title in the event, equalling the record of Pam Ryan.

Chris Mitrevski defeated a field including Fabrice Lapierre to take the men’s long jump with a wind-assisted 8.09m. He also had his first legal eight-metre jump with an earlier effort of 8.01m.

World and Olympic finalist Brooke Stratton and Nia Anang both reached 6.66m in the women’s event, Stratton wining on countback.

Dani Stevens clinched her 13th discus title with a minimum of fuss, the world silver medallist producing a best effort of 65.30m. Kathryn Mitchell, who set a national record of 67.58m a week before the championships, won her second national title with a best of 65.51m. World Championships finalist Kelsey-Lee Roberts was also beyond 60 metres with 62.21m for second place.

Denny’s 64.03m in the discus was the stronger of his two throwing win; he also took the hammer with 72.78m. In the discus, second and third-place finishers Benn Harradine and Julian Wruck were also beyond 60 metres with 64.56m and 60.96 respectively.

BACK
Pages related to this articleAthletes
Riley Day 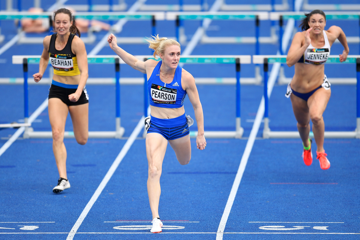