Qieyang Shenjie after her victory in La Coruna (© Luis Gómez)

On a cloudy afternoon that was ideal for endurance events, with the thermometer reading about 15°C during the races, they succeeded in very different ways.

While the 25-year-old Arévalo got the better of Spain’s Diego García by just four seconds, the Chinese walker was an overwhelming victor as she built a massive 1:30 advantage over her closest pursuer, Spain’s Julia Takacs, who managed a massive PB of 1:27:58.

The men’s competition kicked off at a steady pace of around four minutes per kilometre and by the five kilometre checkpoint, which was reached in 20:08, still ten athletes remained in the leading group with Álvaro Martín making most of the pacing duties. The Spaniard pushed hard and progressively injected a brisker speed as he crossed the halfway point in 39:57 with only the company of his compatriot Diego García, the current European U-23 champion, while the chasing group, comprising Arévalo, Spain’s Miguel Ángel López, the Japanese duo of Akihiro Noda and Masatora Kawano and China’s Jin Xiangqian among others, travelled eight seconds in arrears (40:05).

However, the lead of the Spanish tandem was going to be short-lived as they were caught two kilometres later. The first major casualty in the top group was the 2015 world champion López as he began to lose ground with the clock reading 52 minutes. After several hesitant splits – the 16th kilometre was covered in a slow 4:10 – it was Xiangqian who unleashed a powerful change of speed to cover the 17th circuit in a frantic 3:42 to open a three-second gap over García and Arévalo, the only athletes responding to his furious attack.

While the Chinese was finally a victim of his own tactics as he struggled on the final stages, García and Arévalo startled the crowd with a fascinating clash over the closing three kilometres. The Spaniard remained at front throughout while Arévalo seemed to walk effortlessly waiting to make his move at the right moment, which came some 350m to go when the 25-year-old Colombian easily overtook García to join the illustrious list of winners in La Coruña.

At the tape, Arévalo was clocked in a massive SB of 1:19:14, his second fastest ever time only bettered by the National record of 1:18:53 he set to win the London worlds last summer.

The delighted victor said, “I needed such a good result like today after my below-par performance in Taicang. I knew I was in great shape and fortunately the weather was ideal, the rivals were of the highest calibre and all those things have led me to this brilliant win today.”

Asked on his preference for the nearby city of Pontevedra to prepare his last competitions, the Colombian ace confirmed, “There, my Colombian mates and me are like at home, people take care of us, they are so kind, there are good circuits to train, everything is fantastic in Pontevedra,” concluded Arévalo, who must keep sweet memories from Spain as he became world junior 10,000m champion in Barcelona 2012.

As for García, the still 22-year-old surprise runner-up was over the moon as he destroyed his lifetime best for no less than 1:16 to set a new Spanish under 23 record which belonged to the former (1993) world 20km champion Valentín Massana. “Over the last laps my main target was to break the Spanish record (1:19:25), that’s the reason I pushed hard. Arévalo is the world champion and he would have likely beaten me anyway so I can’t be more happy. I hope to be in the fight for the medals at the Europeans in Berlin.”

Japan's Akihiro Noda completed the podium with a 1:19:49 lifetime best.

Shenjie in a class of her own

The women’s event produced no surprises as the pre-race favourite Shenjie proved to be head and shoulders ahead of the rest of the line-up. From the gun the 27-year-old London Olympics silver medallist easily broke away from the others with tremendous ease and her win became clear already in the early stages.

Shenjie went through the opening 5000m in 21:36 to build a massive 46-second advantage on the chasing pack which was formed by the Spanish duo of the 2011 European U-23 silver medallist Takacs and Raquel González plus the Portuguese tandem of Ana Cabecinha and the world 50km champion Ines Henriques.

Like a Swiss clock, Shenjie walked at a slightly under 4:20 per kilometre pace to clock 43:10 at halfway. By then, Takacs had managed to get rid of her chasing group mates and travelled alone in second, but no less than 1:01 behind the Chinese but 18 seconds clear of Cabecinha, while Henriques and González walked together another 24 seconds adrift.

There were no remarkable changes over the second half of the 20-lap event with Shenjie gradually strengthening her leadership, Takacs comfortably in second and Cabecinha a distant third.

The clear winner expressed her satisfaction for her win after the two runner-up places she recorded in 2015 and 2016 behind her compatriot Liu Hong on both occasions. 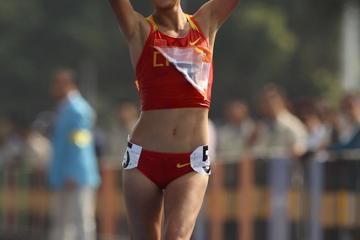 Liu and Barrondo take the spoils in La Coruna... 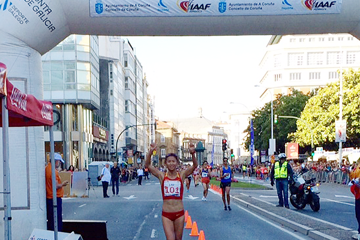 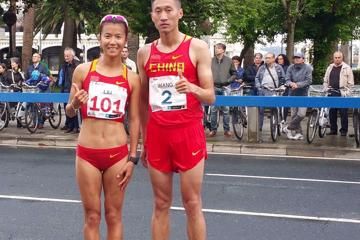 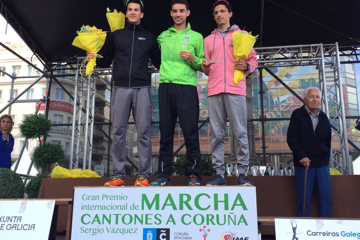 Martin and De Sena take the spoils in La Coru...