Kenyan athletes won every available title – and 10 of the 12 individual medals on offer – at the 4th edition of the African Cross Country Championship in Yaounde, Cameroon, on Saturday (12).

Having finished third at the 2014 African Cross Country Championships in Kampala two years ago, Alice Aprot was this time in a class of her own and produced the most convincing victory of the day.

The All-Africa Games 10,000m champion hit the lead as soon as the gun fired and never looked back. She covered the 8km course in 29:52 to win by a staggering 52 seconds.

The last race of the day, the senior men’s 10km, saw an epic sprint finish between Kenya’s James Rungaru and Uganda’s Philip Kipyeko.

After a conservative start led by the Kenyan runners, Kipyeko took the lead with four kilometres to go. He then started to push the pace, reducing the leading pack to four men with a lap to go.

With the final kilometre approaching, the lead group was quickly whittled down to three as Rungaru and Charles Yosei matched Kipyeko’s pace. With Kipyeko threatening to end Kenya’s dominance, it came down to a final fight for gold between him and Rungaru.

The long-striding Rungaru finally hit the front with 50 metres to go, outkicking Kipyeko to win by one second in 26:35, the smallest margin of victory in the senior men’s race in the history of the African Cross Country Championships.

“I have finally won after trying twice,” said Rungaru after winning his first major title, having previously represented Kenya at the 2015 All-Africa Games and at the 2011 IAAF World Cross Country Championships.

Kipyeko, on the other hand, led Uganda to a team silver medal to go with his individual one. Yosei took the bronze in 26:46, earning Kenya’s 14th medal of the day.

The first race of the day saw 1500m specialist Miriam Cherop lead her compatriots to a perfect team score of 10 points as Kenya filled the top four positions in the junior women’s race. Cherop, who hails from Bomet County, an area that has produced some of Kenya’s finest talents, used her finishing speed to take a convincing victory in 18:31.

Gloria Kite, from Saint Patrick’s High School in Iten and who is guided by renowned coach Brother Colm O’Connell, edged out Winfred Mbithe by one second to take the silver medal. Lucy Cheruiyot finished fourth to give her team the perfect 10 points, while Ethiopian Muliye Dekobo was the first non-Kenyan finisher in fifth.

Kip Evans for the IAAF 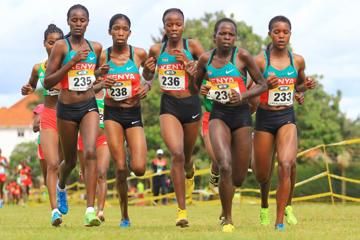 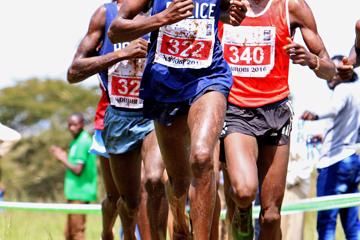