The inaugural Kip Keino Classic on Saturday (3) will be a ground-breaking experience in many ways.

First, it will be Africa’s first romance with the World Athletics Continental Tour Gold meeting series, and, second, it heralds a new dawn for Nairobi’s desire to host more high profile one-day competitions.

And then it also celebrates Kenya’s trailblazing track star, Kipchoge Keino, gold medallist at the 1968 and 1972 Olympic Games.

To put the icing on the proverbial cake, the meeting celebrates the re-opening of the upgraded Nyayo National Stadium where visiting athletes are already predicting fast times owing to the nature of the track.

Held as Kenya slowly opens up following a lengthy Coronavirus lockdown, the meeting will instill confidence in Kenyan sport and offer both athletes and fans something to celebrate after seven months of inactivity.

Just to signal the significance of the Kip Keino Classic, Kenya’s Head of State, Uhuru Kenyatta, personally supervised the renovation work at the stadium which he officially opened on 26 September.

Despite the challenges visited by the Coronavirus pandemic, Saturday’s meet has attracted a good field, especially from host nation Kenya with the 800m, 1500m, 5000m and 3000m steeplechase competitions drawing a decent entry for both men and women.

Chepkoech back in the spotlight

The highlight of the event could be the women’s steeplechase where reigning world champion Beatrice Chepkoech will lead the charge. Chepkoech arrives after a strong 8:22.92 personal best at the Doha Diamond League meeting last weekend where she came home third. She's clearly in strong shape, but will nonetheless look to bounce back from a rare defeat she suffered in her specialty in Berlin last month at the hand of Hyvin Kiyeng who dazzled with a 9:06.14 world lead.

In the corresponding men’s race, reigning world and Olympic champion Conseslus Kipruto will be aiming to entertain the home crowd with a memorable race after only managing to compete in one race this season, and that in a race he didn’t finish.

Kipruto will be challenged by 2016 world U20 champion Amos Kirui and Ethiopia’s Tadese Worku, who raced to silver in last year’s U20 race at the World Cross Country Championships.

---
Updated 10:30am CET 2 Oct: Conseslus Kipruto has withdrawn from the meeting with a slight hamstring strain.
---

Obiri back in action

Olympic champion Hellen Obiri will meanwhile be looking to close down her season strongly after solid performances in the make-up season of the Wanda Diamond League. She will compete in the women’s 5000m.

In-form Obiri scorched to victory in the season opening Monaco leg of the Diamond League, clocking a meeting record time of 14:22.12 and last weekend won the Doha 3000m in a sizzling world lead of 8:22.54.

“I am excited that I am finishing the season at home,” Obiri said. “It will be very good for us as Kenyan athletes to race in front of our home fans and for them to watch us race. I am expecting very good competition in our 5000m race and may the best person win.”

World Champion Timothy Cheruiyot has been confirmed for the 1500m after having a successful season, winning both of his Diamond League 1500m outings. He’s the world leader at 3:28.45. He will take on seasoned athlete Silas Kiplagat.

Ivory Coast’s Arthur Cisse tops the 200m entries and going by his recent form - an Ivorian record of 20.23 last weekend in Doha - he undoubtedly remains the favourite.

South Africa’s Sinesipho Dambile can be a threat, as the 18-year old has already shown he has some star-power, clocking a season’s best of 20.47 back in March, just before the sporting world came to a halt. Dambile has a personal best of 20.43.

Veteran US sprinter Mike Rodgers will also line up.

British sprinter Kristal Awuah and middle-distance runner Noeli Yarigo from Benin eye to wrap up their season in style.

Awuah, who has contested nine 100m races in the last two months and three 200m races, will race in the longer dash while Yarigo will compete in the women’s 800m.

The duo are among 30 athletes who had arrived in Nairobi on Thursday evening.

Yarigo, who has competed in 10 800m races since July, has warned Kenyan athletes to expect a fast race.

Yarigo’s season best is 2:00.11 from her victory in Bydgoszcz, Poland on 19 August. “The track looks pretty fast and I am looking for 1:59 on Saturday,” said Yarigo, who refers to Kenya as her second home, having trained in Eldoret in recent years.

Ferguson Rotich, fresh from his win in Doha, will hope to continue his fine form but he will have to battle youngsters including Commonwealth champion Wycliffe Kinyamal who has a Personal Best of 1:43.12 and 2016 world U20 champion Kumari Taki. 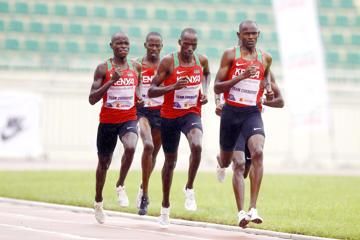 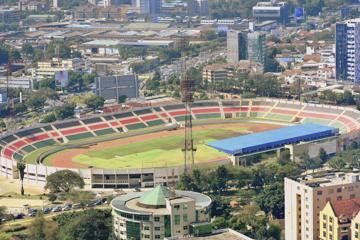