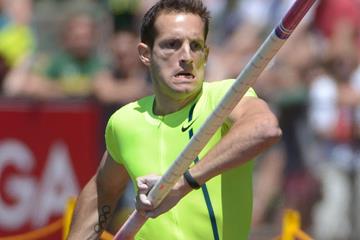 Renaud Lavillenie broke the legendary Sergey Bubka’s world pole vault records, clearing an unbelievable 6.16m indoors this winter, and now he is confirmed to appear at one of the world’s most prestigious athletics events, the DN Galan meeting in Stockholm, on 21 August.

The IAAF Diamond League meeting has a formidable meeting record, which will require some effort to be broken, even by the flying Frenchman who currently leads the Diamond Race in the pole vault after wins in the opening two meetings of his event in 2014: in Shanghai and, just over a week ago, in Eugene.

In 1989, Radion Gataullin jumped 5.95m in Stockholm, which still stands as the record in the famous 1912 Olympic Stadium today.

However, Lavillenie is undaunted by the prospect and this height.

“Following my world record indoors, I'm inspired to continue jumping as high as possible all through the outdoor season. I'm aiming for a world-leading result at DN Galan and I want to be the first over six metres in the Olympic Stadium,” said Lavillenie on Monday (9).