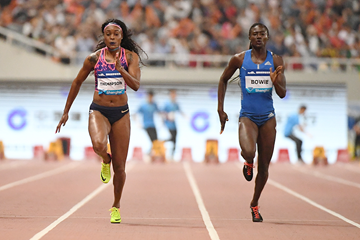 The 100m will be one of Athletissima’s highlights as the world, Olympic and European champions will line up alongside one another at the IAAF Diamond League meeting in Lausanne on 5 July.

Double Olympic champion Elaine Thompson last competed in Lausanne in 2016 and sped to a decisive 10.78 victory in the 100m, despite running the length of the straight 10 minutes earlier when she and most of the rest of the field didn’t realise the first attempt at starting the race had been recalled.

USA’s Tori Bowie took Olympic 100m silver behind Thompson in 2016 but gained revenge in 2017 to win the world title. The former long jump specialist will be competing in Lausanne for the first time.

Dutch sprinter Dafne Schippers has won two European titles over 100m and two world titles at 200m. She won the 200m in Lausanne last year in 22.10.

Double world silver medallist Marie-Josée Ta Lou won the 100m at the opening IAAF Diamond League meeting of 2018, clocking a world-leading PB of 10.85 in Doha. The Ivorian will also be returning to Lausanne, having finished second to Schippers over 200m last year.

Switzerland’s world indoor bronze medallist Mujinga Kambundji is aiming to break the 11-second barrier in the 100m this year and this race could be the perfect occasion for her to achieve that goal.

Like the women’s 100m, the men’s 400m hurdles in Lausanne will also feature the world champion, the IAAF Diamond League champion, the current world leader and the leading Swiss hope.