Britain’s double world and Olympic champion Mo Farah is the first big name announced for the Sainsbury’s Indoor Grand Prix in Birmingham on 21 February, the fifth of five IAAF Indoor Permit meetings in 2015.

The 31-year-old has four previous victories to his name at the Barclaycard Arena, each of them coming in odd years, so he is hopeful of another win in February.

“I’m really looking forward to competing at the Sainsbury’s Indoor Grand Prix,” he said. “It is without doubt one of the best indoor events in the world and I’ve got great memories of setting three British records here over the years.”

He set another British indoor record at the 2011 edition of the meeting, clocking 13:10.60, and his most recent appearance at the Birmingham Indoor Grand Prix was in 2013 when he once again won the 3000m.

It has not yet been revealed which event Farah will be contesting in Birmingham in February. 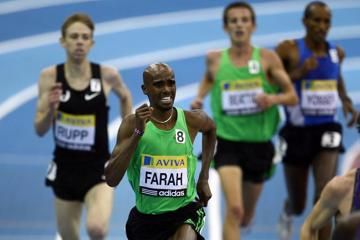