For the first time in the history of the Spar European Cross Country Championships, Spain has won a gold medal at the men’s individual race. Alemayehu Bezabeh, who originally comes from Ethiopia, took the 9.997km men’s senior race on a cold but dry day in Dublin.

Although it was the 16th edition of the championships Bezabeh is only the sixth male runner to win this gold medal. This is mainly because of Ukraine’s Sergiy Lebid, who has won eight titles so far. But on Sunday his golden streak was interrupted once more. Lebid, who last lost in this competition in 2006, still won a medal: Behind Mo Farah (Great Britain) he finished third on a muddy parcours in Santry Park, where more than 5000 spectators lined the loop course.

Mo Farah chose to make the race fast and it seemed to work well regarding his main rival Lebid. While the 26 year-old Londoner was in the lead for most of the first half, the Ukrainian never reached him in the whole race. Lebid was third and coming nearer after round one, but then lost ground again. But there was someone else who went with Farah: Already in the built-up to the European Cross Country Championships a year ago there was some talk about Alemayehu Bezabeh being a possible contender for the gold medal. In Belgium he ended up seventh. This time the hype was quieter about the 23 year-old Spaniard, but he was stronger.

In the fourth lap, Bezabeh, who had placed 11th in the Olmypic 5000 m final in 2008 and had been the strongest European in Beijing, took the lead from Farah, who followed. Looking back at some bends to check about Lebid the Spaniard kept the pace high and then opened a small gap of a couple of metres to Farah in the fifth lap.

But at the bell Farah fought himself back to the heels of Bezabeh. While Lebid was beaten Farah gave everything to win a second European Cross Country gold after 2006. But Bezabeh was stronger and when he decisively surged away with around 500 metres to go there was no way back for Farah, who bravely fought.

“I am especially happy to have won this because it was my first big victory,” said Bezabeh, who crossed the finish line in 30:45 minutes. While Farah (31:02) was so exhausted that he fell to the ground and needed treatment in the finish area, Lebid (31:17) commented: “It was a normal cross country race – tough and fast. I suffered a groin injury two weeks before the race so that I could not train for three days. I wanted to win, but because of the injury I am happy with my bronze medal.”

Spanish runners Sergio Sanchez (31:26) and Ayad Lamdassem (31:30) took the next two places behind Lebid and secured the basis for a team triumph. Great Britain and Italy took second and third in this category. Great Britain once again showed great depth in Dublin, where they were the only country which medalled in all the team events (men and women).

France dominated the men’s Under 23 Race. While Noureddine Smail took the gold in convincing fashion his compatriot Hassan Chahdi came in second and Floran Carvalho was fourth. It was Belgium’s Atelaw Bekele who prevented France from taking all three medals.

In the second half of the 8.018km race a group of three were running together in the lead: Bekele, who did quite some work in the lead, as well as Smail and Chahdi. Carvalho was running in fourth position with quite a gap to lead. While he had no chance of catching the three leaders Britain’s Mitch Goose caught up and was briefly in fourth position. In the end Goose dropped back to fifth.

It looked as if 22-year-old Bekele, who came from Ethiopa when he was 16 years old, could snatch a second gold for Belgium. But then another former African turned out to be much stronger. On the final lap Smail took the lead and none of the two others were able to follow him. The 22-year-old, who originally comes from Algeria, stormed to his biggest success so far, gesturing in joy to the spectators. He finished in 25:11 minutes and was six seconds ahead of Hassan Chahdi. Bekele took third in 25:21.

While there had been no surprise at the first race of the day, when Norway’s Karoline Grovdal took the junior women’s event there was quite an upset in the following junior men’s race. There was no second gold for Norway, which many had expected Sondre Nordstad Moen could win. Instead it was Belgium’s Jeroen D’Hoedt who triumphed in Santry Park.

It had been Moen, who was in the lead for a long time. In 2008 the Norwegian had won a silver medal in Brussels. A stretched group of 14 runners was still together after three of the four laps. “I decided to wait and follow the favourite Sondre. So the first few laps felt comfortable,” said D’Hoedt, who was running behind the Norwegian and Britain’s James Wilkinson.

In the final lap the 19 year-old from Belgium, who had won a bronze medal at the European Junior Championships this summer, moved ahead. While Moen was beaten Wilkinson followed the move. But he was not quite fast enough.

D’Hoedt won the 6.039km in 18:46, followed by Britain’s Nick Goolab (18:47), who was coming through strongly on the final part of the race. Wilkinson (18:47) took third and because of Goolab’s fine finishing speed there was no medal for Moen, who took fourth place with 18:49. “I had hoped for a top five performance. Now I can’t believe that I won the gold,” said D’Hoedt. Great Britain took the team gold from France and Norway.

BACK
Pages related to this articleDisciplines
500 Metres 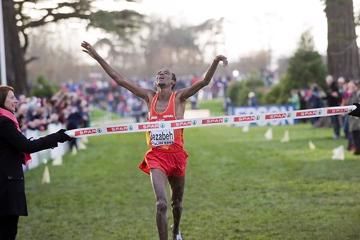