Asher-Smith returns as Diamond League goes back to Gateshead

World 200m champion Dina Asher-Smith will fine-tune her preparations for the Olympic Games when she races in Gateshead on 13 July, following confirmation that the Wanda Diamond League series will be returning to the North East of England for the Muller British Grand Prix.

The Diamond League season opener had been scheduled for Rabat on 23 May but moved to the Gateshead International Stadium due to ongoing coronavirus restrictions. At that meeting Asher-Smith battled the rain and wind to win the 100m and in July she will contest the 200m on that same track.

“My first 100m of 2021 last weekend was against some tough opposition and I’m expecting it to be another exciting race when I go back there in a few weeks’ time,” said Asher-Smith, who triumphed ahead of Sha’Carri Richardson, Marie-Josee Ta Lou and Shelly-Ann Fraser-Pryce.

“Hopefully we will be allowed to have more fans in the stadium and the athletes will get a great send off before they go to the Olympic Games in Tokyo.”

The event on 13 July was originally due to be held at the London Stadium but has been moved to Gateshead due to the repercussions of the pandemic and after an agreement was reached between UK Athletics and the London Legacy Development Corporation.

After successfully welcoming back 2,000 spectators at the Muller Grand Prix Gateshead, British Athletics hopes that more fans will be able to safely return to the stadium for the Muller British Grand Prix. 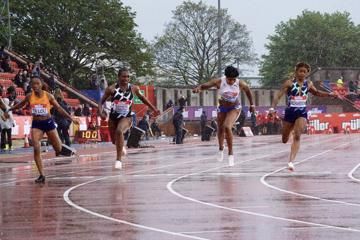