He won his first-round heat with ease in 46.56 and looked just as relaxed when winning his semifinal in a Belgian junior record of 45.72. In the final one day later, he went even faster to surprisingly win the title in 45.03, defeating the pre-championships favourite Christopher Taylor of Jamaica.

But after the 4x400m final on the last day of the championships – his fifth race in as many days – Sacoor revealed he had no particular goal in mind heading into Tampere.

“Nothing, actually,” he said of his pre-championships expectations. “I was here just to set a PB – like every athlete – but to do it so effectively was really amazing. My heat was very good, my semifinal was very good and my final – I think it speaks for itself.

“My training wasn’t at all prepared and I didn’t feel that prepared for the championships. I had my exams at school and I had two weeks where I had to study and then I went on a training camp for two weeks. I came here directly but that training camp really paid off.

“It’s not so much my strength – it was my technique,” he added. “I’ve been getting a lot of compliments on the smoothness of my run and it really came into effect, especially in the last 100 metres.”

Taylor, who was unbeaten in 16 races this year, had a seemingly insurmountable lead coming off the final bend, but while the Jamaican began to lean backwards and lose his form, Sacoor kept his composure all the way down the home straight, looking majestic as he came through on Taylor’s immediate inside for the title in 45.03, an improvement of more than one second on his pre-championships lifetime best of 46.07.

“Since I performed so well here, I think a lot of doors have opened for me so I’m going to talk with my coach,” said Sacoor, who has been studying human sciences at high school. “He probably has something prepared for me; he has a lot of experience with 400m runners.”

That coach is a certain Jacques Borlee, who has trained the three Borlee brothers and sister Olivia, part of Belgium’s gold medal-winning team in the 4x100m at the 2008 Olympics, to so many individual and relay accolades over the past decade.

“I’ve been training with them for about one-and-a-half years and I’ve learnt so much from their experience,” said Sacoor, who was coached up until last year by Jean-Marie Bras. “They are so confident in what they do. It really gave me a lot of confidence and I hope I made them proud here.”

Sacoor admired the Borlees growing up and still has pictures with them on his phone from when he was younger. Not only does he now train alongside his childhood heroes, Sacoor was drafted into the 4x400m team for the first time at the IAAF World Indoor Championships Birmingham 2018 in March.

As if this wasn’t a daunting enough baptism to senior competition for the 18-year-old, Sacoor had never run indoors in a relay before. The final also took place in front of a capacity crowd in Birmingham and it turned out to be the highest quality 4x400m relay in championship history. Sacoor played his part as Belgium set a national record of 3:02.51, a late run from Kevin Borlee pipping outdoor world champions Trinidad & Tobago for the bronze medal. Sacoor gave credit for the role his teammates played both before and during the race.

“I was completely stressing out, freaking out through the entire champs,” he said, smiling nervously as he recalled his senior debut. “I had done two European Championships (one at U18 level and the other at U20 level) and a European Youth Olympic Festival and it’s a whole different level, the World Indoor Championships with the big guys in the 4x400m.

“Everyone is so composed in the call room, so focused. You look around there and everyone is so amazing. I’m sitting there as an 18-year-old like, ‘what am I even doing here?’ but they helped me through it and helped me to stay calm.

“You don’t want to disappoint in such a big relay and with such high expectations,” he added. “They taught me so much, I learnt so much from that team – Kevin, Jonathan, Dylan – they’re such amazing runners and a big inspiration. It’s a lot of thanks to them I’m at this level.”

Sacoor has all of a sudden come to the fore in his event and one of the options at his disposal could see him emulating the older Borlees by training and studying at the University of Florida. But what is for certain is Sacoor will not contest the individual 400m at the European Championships in Berlin, preferring to prioritise long-term success over the immediate chase for medals.

“In these championships, you see a lot of amazing talents and it’s kind of sad when some don’t get up to their full potential and we definitely want to avoid that,” he said. “If you see the Borlees right now, they are 30 already and they are still in great shape and running great times.”

Sacoor will, however, compete in the 4x400m at the European Championships in Berlin where Belgium line up as reigning champions. The Borlees have for so many years been the backbone of the Belgian team, but with a 45.03 PB to his credit – and two sub-45 legs in the 4x400m in Tampere (he ran 44.56 on anchor in the heats and 44.7 on the second leg in the final) – the Belgian relay team, who are affectionately known as the Belgian Tornadoes, has arguably never been stronger with Sacoor expected to become a regular fixture on their team sheet.

“I think it’s definitely what we are going to go for,” said Sacoor when asked about their title defence prospects in Berlin. “We are one of the strongest teams in Europe right now and I’m glad to say I’m part of it right now.”

But individually Sacoor, who is described by Jacques Borlee as an “enormous talent”, also has a huge future. His winning time in the 400m in Tampere was just outside Thomas Schonlebe’s 34-year-old European U20 record of 45.01. But for Sacoor, times and records aren’t much of a consideration as he prepares to take over the baton – in both a figurative and literal sense – on the senior stage from Kevin and Jonathan Borlee who are reaching the mature stages of their careers.

“I’m not going to be sad about those two little hundredths of a second,” he said. “I’m already very happy with this big new Belgian record and I can’t complain.” 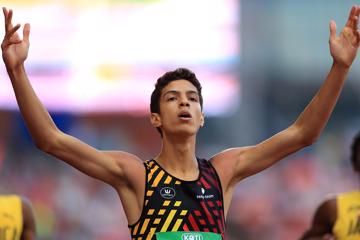