When the drug testers called at 6.50am a few weeks ago, not even Robert Heffernan’s dog barked.

Like his pet, the world 50km race walk champion has long got used to similar knocks, although, with true gallows humour, the 35-year-old had a few pithy comments for the early morning intrusion.

However, Heffernan freely acknowledges crawling out of bed has its upside.

For a start, the men with test tubes would probably be diverting their attention elsewhere if the Irishman were anonymous.

More to the point, it was a bit of practice in preparation for child number three, a baby girl for Heffernan and his wife Marian, herself an international 400m runner, who arrived on 26 January.

The new arrival heralds yet another challenge in managing fame and family commitments.

Apart from the little matter of training, in what waking hours are left, the genial champion is also masterminding two new mass-participation walking events. The first will be in May, and it will eventually fund a new elite race walking training centre in the Irish province of Munster.

The idea that Ireland would have its own specialist walks camp would have drawn snorts of laughter just a decade back.

Now, Ireland’s third world champion, after distance runners Eamonn Coghlan and Sonia O’Sullivan, is head down and preparing to hopefully add a European 50km race walk gold this summer to the global one he won in Moscow.

He and Marian have converted the attic to help make room for the new baby and there's also now a big log cabin in the back garden.

Basic it may be, but it boasts electricity, carpet, a corner sofa and a television.

Marian teases her husband over his new ‘man cave’, but on a serious front, while she’s dealing with the demands of a newborn, he has a bolt hole where he will get the necessary rest that goes with being a top athlete.

The family is already well used to living in different rooms or countries during those periods when he sleeps in an altitude tent in their Cork home, or goes south to warm-weather training camps like Guadix in Spain’s Sierra Nevada, which is at approximately 1200 metres altitude.

An uncompromising attitude to excellence was Heffernan’s from day one on the international scene.

Bernie O’Callaghan was looking after the Irish team at the IAAF World Race Walking Cup in Mezidon, France, back in 1999 when the youngster was making his debut in the big time.

O’Callaghan remembers the night before the 20km, when butterflies in one or two on the team were the visible symptoms of pre-race nerves.

The talk was of difficulty beating this or that walker but Heffernan was having none of it.

He rounded on a pal and, according to O’Callaghan, reckoned they were not only going to beat the targets but that it was just the start of things to come.

“I knew then that Irish walking was making inroads on the world scene, and that Robbie and others had a bright future,” said O’Callaghan.

Heffernan admitted that, even as an inexperienced 21-year-old, those standing alongside him on the same line were there to be knocked over.

“It was my mentality to have a no fear factor even then,” he explained. “They’ve all got two legs like me and they’re no different, and it’s one of the reasons I went from 92 minutes to 86 minutes reasonably quickly.”

Heffernan played football at school, but was inclined to give walking a go.

Michael Lane looked after O’Sullivan and McDonald and was Heffernan's first coach before he moved on to the great Robert Korzeniowski. The double Olympic and world champion gold moved the Irishman on another notch, but the real motivator from the start was Heffernan’s self-belief.

“I knew about Gillian and Jimmy, of course I did,” reflected Heffernan. “But I couldn’t really say they inspired me as such. It was more a question of seeing what I could do in the sport.

“At one stage I had to sort out my hamstrings, and I did that. I was always asking myself what could I do to get a better result? I’m still asking myself the same questions.

“I guess the motivation was always there, and sure, that’s the biggest difference between me and maybe a lot of other talented athletes who haven’t quite made it.”

If Moscow gold was proof the man had finally made it in athletics, being named as the provider of Ireland’s 2013 greatest sporting achievement, over no less than horse racing legend Tony McCoy who rode his 4000th winner last year, was the ultimate accolade.

Now, he prepares to race the 20km at the IAAF World Race Walking Cup in Taicang, China, in May, whether it be emerging from his man cave, into the sun in the Andalusia town of Guadix, or a crawl out of bed at home,  there is always another tester to satisfy. 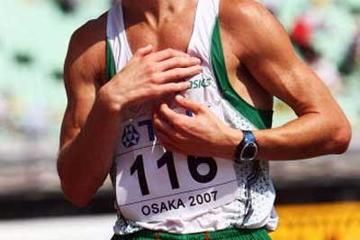 Heffernan is asking the right questions ahead...