The American humourist and novelist, Mark Twain, once observed: “Everybody talks about the weather, but nobody does anything about it.”

Like many famous quotations, its attribution is sometimes contested. We can be sure, however, that in the mid-1980s, successive and debilitating boycotts of the Moscow 1980 and Los Angeles 1984 Olympic Games had everybody talking about the potential demise of the Olympic Games.

Ted Turner did something about it. He created the Goodwill Games.

Turner, the billionaire media proprietor, philanthropist and founder of the Cable News Network (CNN), proclaimed the lofty goal of easing the tensions between the capitalist West (read the USA) and communist East (Russia and its post-war Eastern Bloc) nations which had culminated in tit-for-tat boycotts of the two Olympics.

Lamenting the breakdown in relations between the two superpowers, Turner brokered business and sporting deals with the then Soviet Union. In 1985, he reached agreement between his company, Turner Broadcasting Systems (TBS), and Soviet broadcasting and sporting organisations to stage a multi-sport event in 1986.

“This agreement calls for the two systems to act in the spirit of friendship and goodwill to further international television cooperation,” Turner said. “It is our hope that through programme exchange, we can further peace, understanding and friendship between our nations.”

Overall, the Games were contested by 3000 athletes from 79 countries. Not until Rome 1960 had more nations participated in an Olympic Games and not until the post-World War II era did athlete numbers reach, and remain above, 3000.

In 1996, TBS had merged with Time Warner, which henceforth controlled the Games. After Brisbane, Time Warner announced that falling television ratings meant the Games would no longer be held.

Turner blamed Time Warner for the demise of the Games. In a 2009 interview he said: “If I’d stayed there the Goodwill Games would not have been cancelled.” He also reiterated his belief in the power of international sporting competitions to prevent war, saying that “as long as the Olympics are taking place and not being boycotted, it’s virtually impossible to have a world war.” 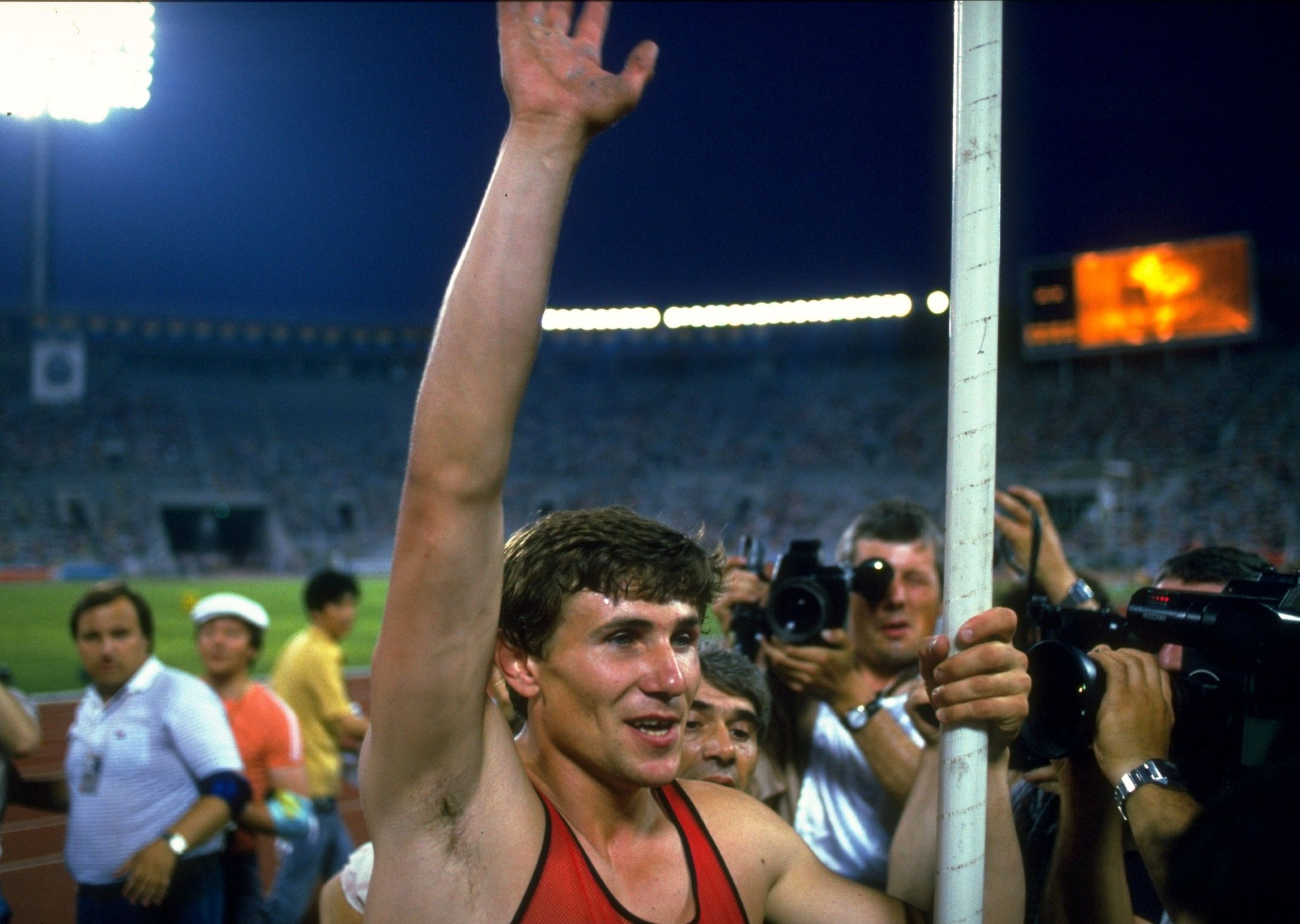 Joyner-Kersee took the first of her four Goodwill heptathlon gold medals with a world record 7148 points. The first woman to score over 7000, Joyner-Kersee didn’t so much break the world record as put it out of sight, adding a massive 203 points to the previous mark while relegating the previous holder, Sabine Paetz, to a distant fourth.

“We’re trying to make it so Jackie only has to walk the 800 to get the record,” coach Bobby Kersee said pre-competition. Instead, Joyner-Kersee produced a near-personal best 2:10.02 to close out in style.

Bubka belied a previous dislike for the Luzhniki.

“I used to think I was a little bit cursed here," he said. “The wind swirls around ... and can be very distracting. But if I can jump 6.01m here, I know I can do even better elsewhere.”

The horizontal jumps were high-class. Robert Emmiyan leapt 8.61m to beat Larry Myricks’s 8.41m in the men's long jump, while Mike Conley won the men's triple jump with 17.69m and Galina Chistyakova went 7.27m to win the women’s long jump. In the women’s 100m, Evelyn Ashford edged Heike Drechsler, both being given 10.91.

US magazine Track & Field News reported: “Judging by the financial bath which Ted Turner is rumoured to be facing, the first Goodwill Games could be the last.”

In his first Goodwill appearance, Carl Lewis lost the men's 100m to his Santa Monica Track Club teammate Leroy Burrell, who ran 10.05 to Lewis’s 10.08. In the long jump, Lewis’s 8.38m edged Mike Powell by four centimetres. Both these results would be overturned at the following year’s Tokyo World Championships when Lewis would beat Burrell in a world record 9.86 and Powell stun Lewis with a world record 8.95m. 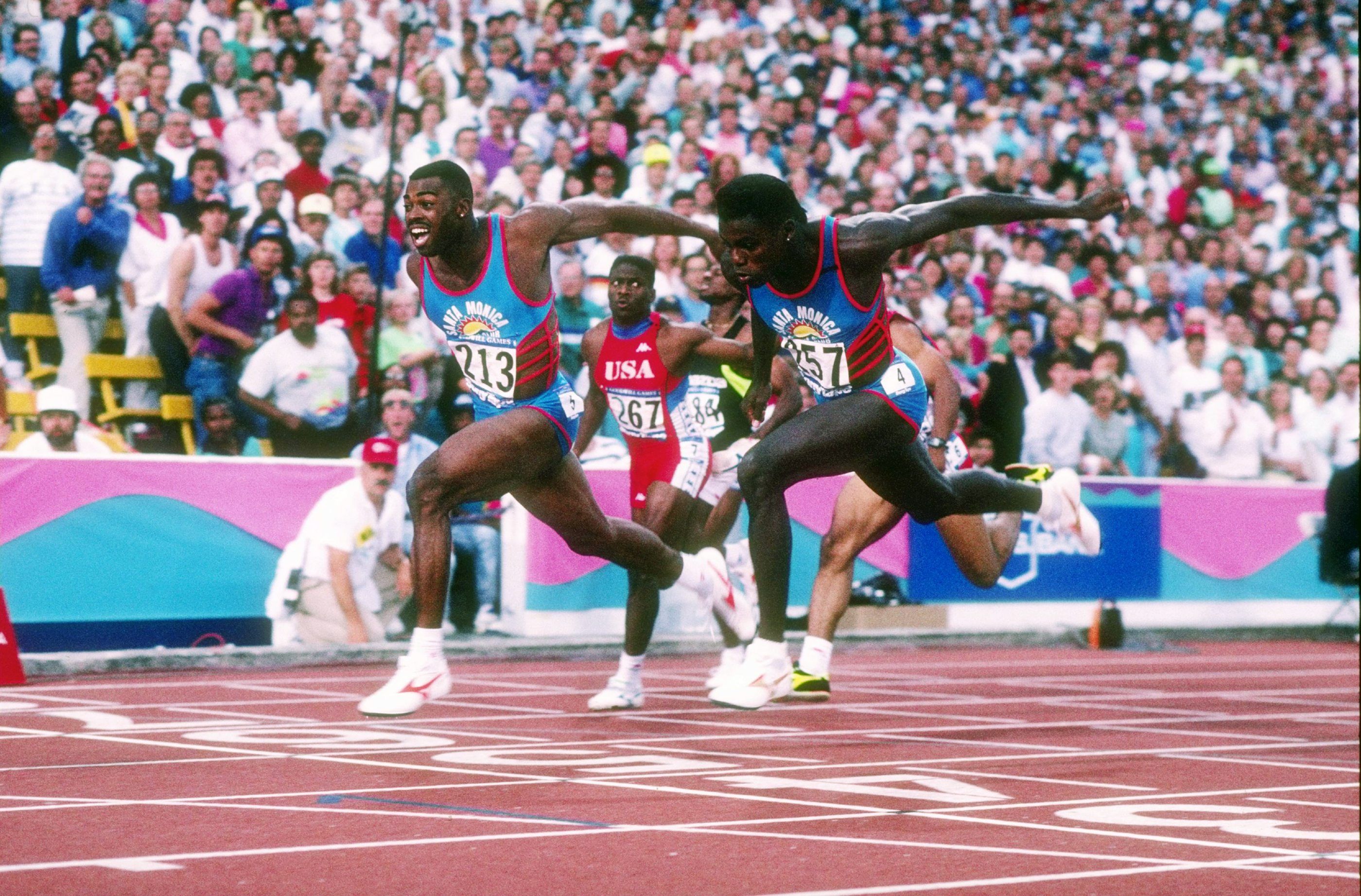 The rivals-but-friends relationship between Lewis and Burrell fascinated the Games’ media. Burrell took exception when a journalist asked why there wasn’t more “hate” involved.

“Why does it have to be an adversarial thing,” Burrell demanded. “These are Games about good will. Why must there always be hate involved in a competition.”

Amid the turmoil of the former Soviet Union and its Eastern Bloc breaking up, European participation in the Seattle Goodwill Games was markedly reduced.

To Russia and St Petersburg for the third edition, Kirov Stadium the venue.

The world record-breakers from the first Games experienced contrasting outcomes. Joyner-Kersee made it three straight in the heptathlon, defeating strong opponents in Russia’s Larisa Turchinskaya and Syria’s Ghada Shouaa.

Bubka, however, was no better than third as Igor Trandenkov won the pole vault. Six days later, Bubka bounced back with the 35th world record of his career, 6.14m in Sestriere. It was a performance which netted him a red Ferrari.

With performance bonuses on offer, a minor controversy erupted when pacemakers helped Noureddine Morceli to a 3:48.67 in the mile.

Gwen Torrence won a women’s sprint double, despite claiming the starter had let the field go before she was ready in in both races. 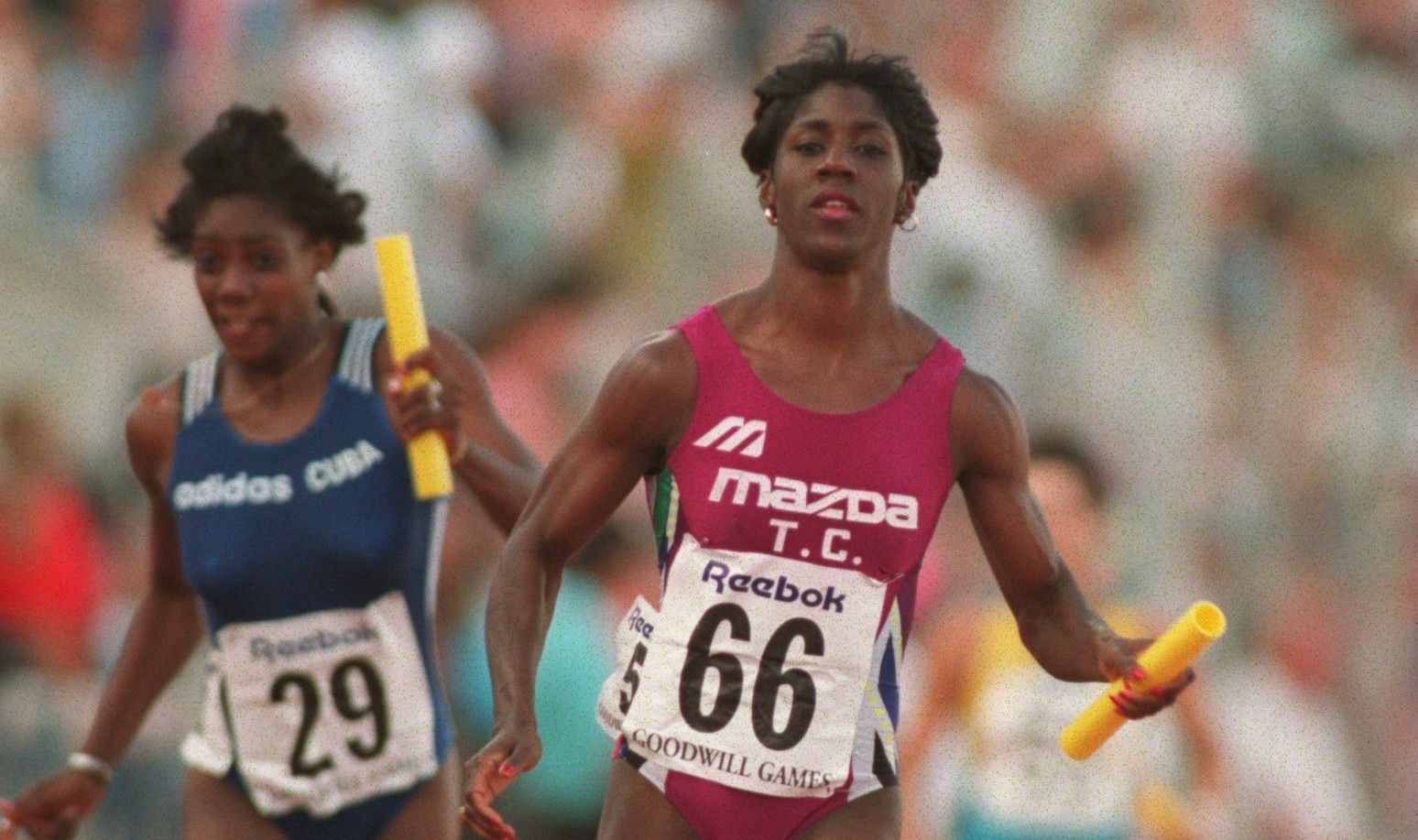 Torrence, who also claimed 4x100m gold, said she wasn’t even on her marks in the 200m. “I couldn’t believe it. I thought about giving up, but I thought about all the people who came to see me race ... (and) I made up my kind to run like hell.”

Other stand-out winners were Javier Sotomayor with a 2.40m high jump, Dan O’Brien with 8715 points in the decathlon and Drechsler with 7.12m in the long jump.

Jim Dunaway reported for Track & Field News magazine that the 1998 Games assembled the best non-Olympic entry list ever in a US meeting.

A lowlight was the ruptured achilles tendon sustained by Moses Kiptanui in the steeplechase, as another Kenyan, Bernard Barmasai, won. 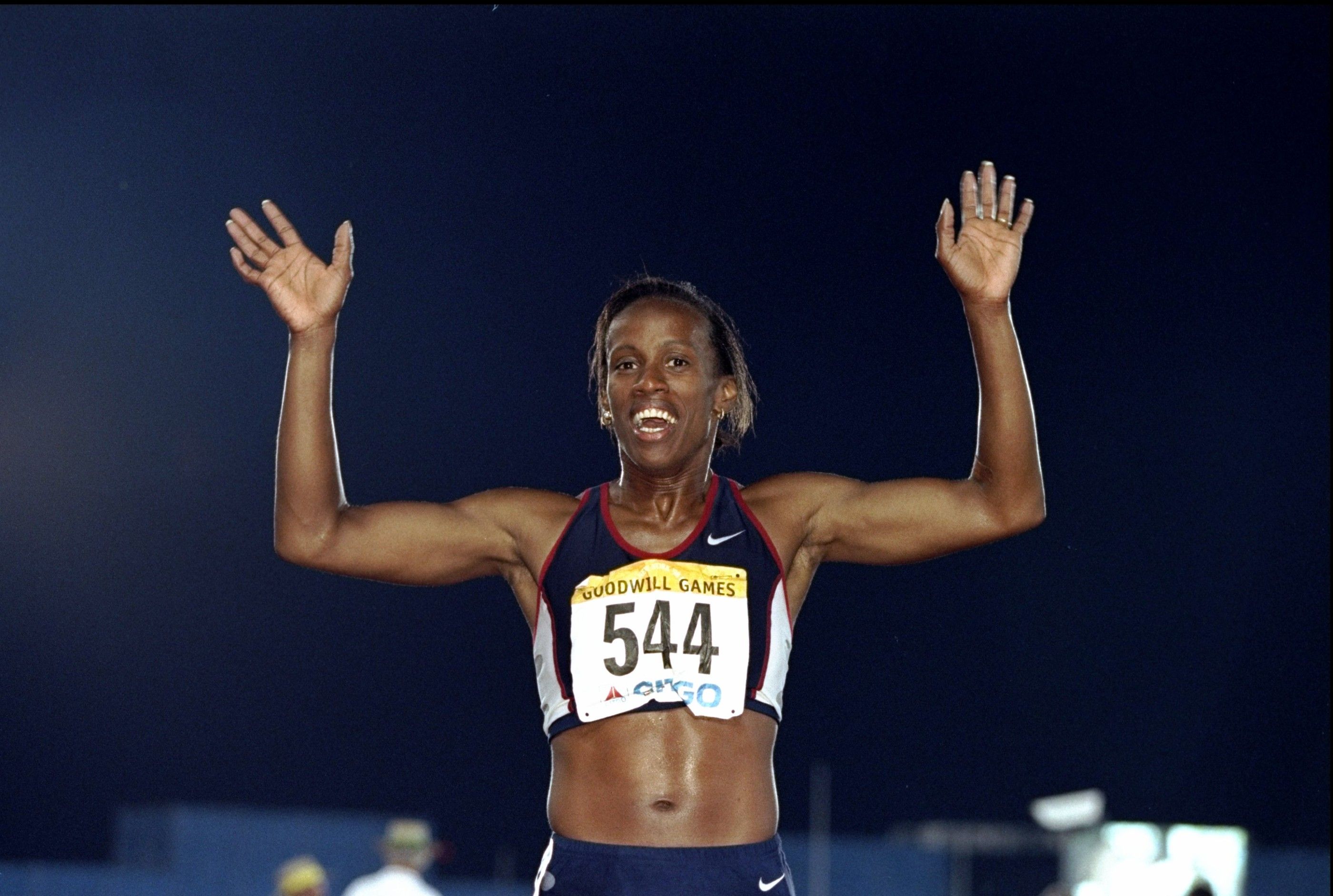 Leading by 46 points coming into the 800m – an event Joyner-Kersee disliked intensely – she had to work hard to hold off fellow US athletes DeDee Nathan and Kelly Blair-LaBounty. Joyner-Kersee retired as the one-and-only Goodwill Games heptathlon champion.

The Games’ future was again under discussion. Track & Field News’s Dunaway mused their continuation was “not so much a question of competition as of whether Turner Sports can turn a profit on this made-for-TV event, or is willing to continue it at a loss for the ‘prestige’ and worldwide TV programming pluses it generates.”

Johnson ended his career in the Brisbane Goodwill Games 4x400m, anchoring the US to first across the line in 3:00.52 on the final night of competition.

Good crowds attended the Games and around 30,000 cheered Johnson to the echo. Sadly, the result was subsequently annulled when one of the other team members admitted to doping, victory going to Poland.

That didn’t spoil the feeling in the moment. 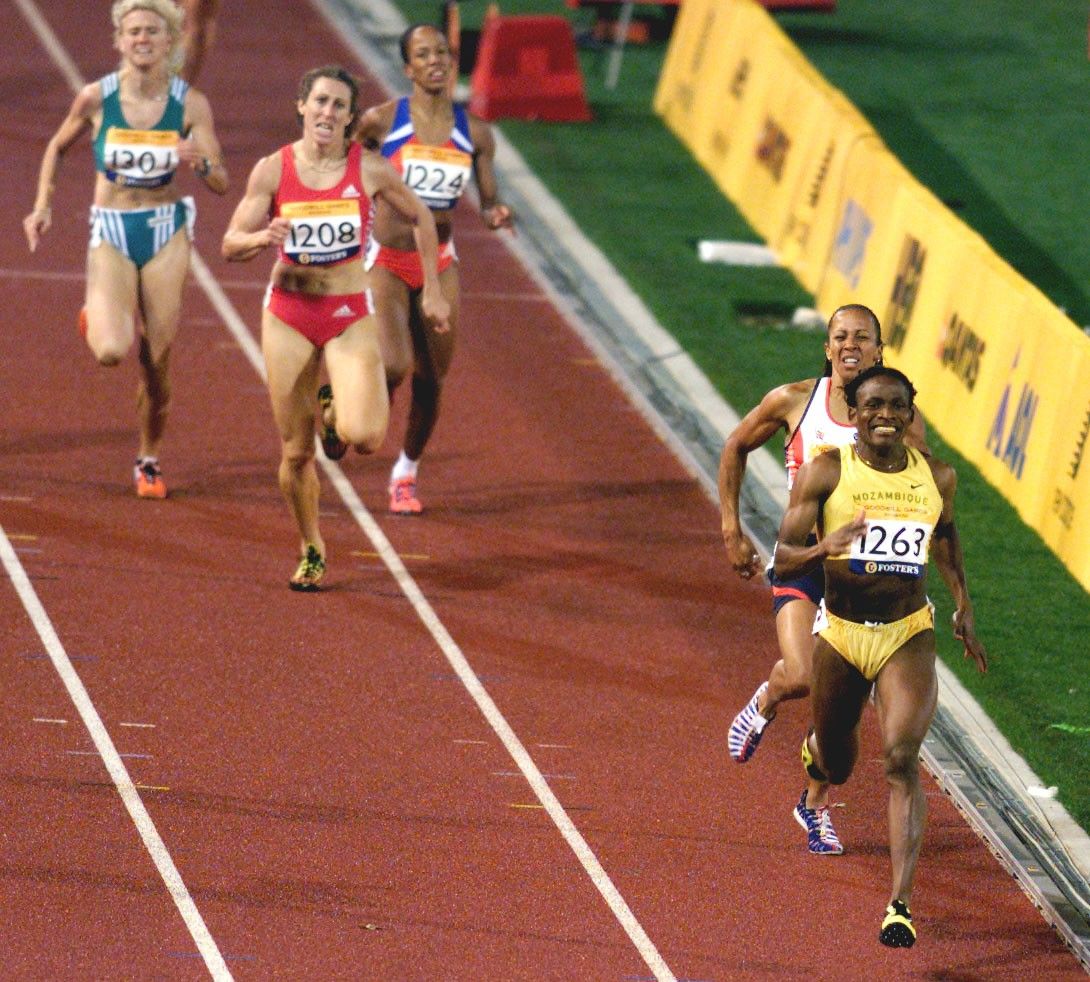 Shortly after the Games closed, Time Warner announced Brisbane would be the last edition. They had delivered on Turner’s stated aim of easing the superpower tensions of the 1980s. And, while there remains room for improvement in international relations today, the probability is that the rebuilding of the Olympic Games after the boycott era rendered the raison d’être of the Goodwill Games largely redundant.