The course records at the Xiamen International Marathon, the first IAAF Gold Label Road Race of 2015, look vulnerable as a strong field of elite runners are ready to continue the record streak on Saturday (3).

Reigning men’s champion Mariko Kiplagat Kipchumba of Kenya will find it hard to defend his title. Last year he clocked 2:08:06 to win a relatively slow race, which saw the five-year streak of course records in the men’s race come to a halt.

Kipchumba, who ran his PB of 2:06:05 when winning in Reims in 2012, will be up against the strongest field ever assembled in the race’s 13-year history.

His countryman Moses Mosop is among the top favourites. The former Chicago Marathon champion ran 2:03:06 on Boston’s point-to-point course on his marathon debut, then one year later set an official PB of 2:05:03 in Rotterdam.

He has raced sparingly in recent years, however, finishing just 12th in Prague earlier this year in 2:20:37.

Perhaps the biggest threat to break Negari Terfa’s course record of 2:07:32 is Ethiopia’s world bronze medallist Tadese Tola.  The 27-year-old set his PB of 2:04:49 at the 2013 Dubai Marathon and has also recorded victories in Paris, Warsaw and Beijing, breaking the course record in the latter.

His performance of 2:07:16 in Beijing is the fastest marathon ever recorded in China, outside of major championships, which bodes well for his race in Xiamen, his second marathon in China. Of the 12 marathons he has completed, nine have been faster than the existing Xiamen course record.

Two other men on the entry list have run significantly faster than 2:07:32. Former Rotterdam Marathon winner Tilahun Regassa has a best of 2:05:27 and Kenya’s Albert Matebor is marginally quicker at 2:05:25.

Matebor hasn’t run faster than 2:08 since setting his PB, but Regassa recently won the Eindhoven Marathon in 2:06:21, his ‘slowest’ performance to date.

Another seven runners in the field have personal bests faster than 2:10, including 2012 race winner Peter Kamais who clocked a PB of 2:07:37 to set the then course record.

Ethiopia’s 25-year-old Mare Dibaba enjoyed an overwhelming victory in Xiamen last year. Leading early in the race, the third-fastest Ethiopian woman clocked 2:21:36 to cruise to the top of the podium while beating the previous course record of 2:22:38 set by China’s Zhang Yingying in 2008.

Compatriot Mamitu Daska may be the biggest challenger for Dibaba on Saturday. The 31-year-old took nearly 90 seconds off the Frankfurt course record when setting her PB of 2:21:59 in 2011. She was also the winner of the 2010 Dubai Marathon and 2011 Houston Marathon.

Another Ethiopian, Meseret Legesse, has plenty of experience running in China. She was the runner-up to Dibaba in Xiamen last year (2:26:36) and finished second at the 2013 Hengshui Marathon in a PB of 2:26:15.

Also in the race are Goitetom Haftu of Ethiopia, whose PB is 2:26:21 was set when finishing second at the 2011 Rome Marathon, and Namibia’s Helalia Johannes, who finished 12th in the marathon at the 2012 Olympics in a national record of 2:26:09.

The race in China’s Fujian Province is known for its beautiful coastal circuit and is designed for 45,000 registered participants, with 25,000 in the marathon and 20,000 in the half marathon races. 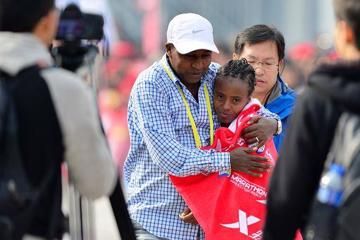