Having been upgraded from Bronze to a World Athletics Gold Label in barely one year, the 10k Valencia Ibercaja on Sunday (12) will bring together an impressive line-up of athletes who are targeting the course records of 27:23 and 30:15.

Kenya’s world 10,000m bronze medallist Rhonex Kipruto will be the standout athlete and is one of eight men in the field who have bettered 27:30 for the distance on road. The 20-year-old came tantalisingly close to the then world record of 26:44 when he clocked 26:46 in Prague in September 2018.

In addition to his Doha accolade, Kipruto has shown a great consistency in 2019, having twice bettered the 27-minute barrier on the track, topped by a lifetime best of 26:50:16 to win in Stockholm, a performance only 0.16 faster than the time which led him to his world bronze medal.

Kipruto, who last year took a commanding win at the Elgoibar Cross Country Permit meeting on the same second Sunday of January, was recently successful at a 10km road race in the altitude of Eldoret, winning in 28:24.

The Kenyan ace arrived in Valencia on Thursday afternoon and confirmed he has prepared specifically for Sunday’s race for the past three months. Kipruto will be paced by his compatriots Jacob Kiprop, who finished sixth in the 5000m at the World Championships, and Shadrack Koech, who finished fourth in Prague last September in a PB of 27:21. There is no talk about a world record (26:38) attempt but the in-form Kipruto will likely target another sub-27-minute run.

Other Kenyans in the field include Benard Kimeli, Vedic Kipckoech and Alex Korio. Kimeli is a 27:10 specialist who also has a 59:07 half marathon PB set last April in Prague, while the 23-year-old Kipkoech recorded his fastest ever time last year here in 27:25. Korio boasts an impressive 58:51 half marathon best and set a 27:34 10km career best in Cape Elizabeth last September.

Ethiopia’s defending champion Chala Regasa and Uganda’s 2019 runner-up Stephen Kissa will clash again on Sunday. The former set the current race record of 27:23 to beat Kissa by just one second, the Ugandan triumphing in Laredo two months later in a career best of 27:13. His last appearance came two months ago in Nijmegen where he won over 15km in 41:49.

European 10km record-holder Julien Wanders will also be in contention. The 23-year-old Swiss, who has PBs of 27:25 on the road on 27:17:29 on the track, should be a factor on Sunday. He narrowly missed a medal at the recent European Cross Country Championships where he was fourth.

Sheila Chepkirui is the fastest entrant in the women’s race thanks to her 29:57 clocking in Prague last September, making her the second-fastest woman in history for the event.

The 29-year-old Kenyan started out as a middle-distance runner and won the 1500m at the 2005 World U18 Championships. She now splits her time between the track and roads, with her most recent outing coming on 24 November when she had to settle for fourth place at the Eldoret 10km in 32:29.

She will be joined by compatriots Rosemary Wanjiru and Norah Jeruto. The former finished a surprising fourth in the 10,000m at the World Championships in Doha, lowering her PB in the process to 30:35.75 while Jeruto is a top steeplechaser and one of just five women in history to have bettered the nine-minute barrier for the event. The 24-year-old is fresh from a convincing win in Houilles last month in 30:32.

Watch out too for Uganda’s Stella Chesang, a 31:14 performer, and the in-form Briton Charlotte Arter, a fine seventh at last month’s European Cross Country Championships.

Weather forecasters predict a perfect day for endurance efforts with a temperature ranging from 9-11C, sun and no wind. A record number of 14,481 runners from more than 40 countries will take part. 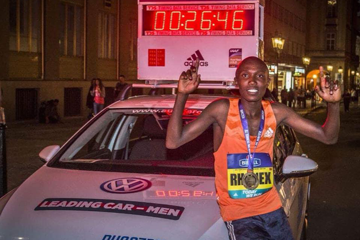 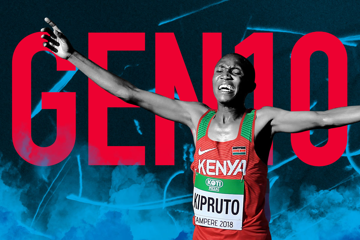 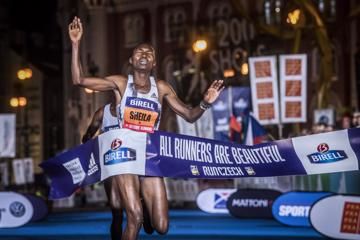