Farah and Muir aim to bring down the house in Birmingham

The five-meeting IAAF World Indoor Tour culminates on Saturday (18) with the Muller Indoor Grand Prix in Birmingham, where athletes will be battling for a wildcard to enable them to return to the British city for next year’s IAAF World Indoor Championships.

As well as the wildcard, the winners of each of the 11 scoring disciplines in this year’s IAAF World Indoor Tour will also land a US$20,000 bonus. Only one discipline – the women’s triple jump – has already had its winner confirmed. The other 10 will be contested in Birmingham, and aside from a few disciplines where athletes have unassailable leads, there is still much to play for.

Some of the highlights of the meeting, though, could come from Britain’s top stars.

Organisers will be hoping that multiple world and Olympic champion Mo Farah will send the fans home happy when he competes in the final event of the afternoon, the 5000m, where he might target his own European indoor record of 13:10.60. Farah has set numerous national and European records – and even a world best – in Birmingham, but in his most recent race he finished a well-beaten seventh at the Great Edinburgh X-Country.

Just 20 minutes before Farah takes to the track, another Briton will be in action and aiming to break records.

Muir’s stiffest competition could come from USA’s Olympic 800m finalist Kate Grace, who this year has set indoor PBs for the 800m, 1500m, mile and 3000m.

In the women’s 60m, there are three women with realistic ambitions of taking the World Indoor Tour title and one or two others with outside chances. But all of them will have to be at their absolute best to beat double Olympic champion Elaine Thompson.

The Jamaican, who will be making her seasonal indoor debut in Birmingham, ran 7.02 outdoors at the end of January. For context, she ran 7.17 at the same competition last year before going on to clock indoor PBs of 7.14 in Glasgow and 7.04 in the semifinals at the IAAF World Indoor Championships Portland 2016.

Olympic finalist Christania Williams – who finished just 0.03 behind Thompson in Kingston last month – will also be in Birmingham, along with the three women at the top of the World Indoor Tour standings: world indoor champion Barbara Pierre, Jamaica’s Gayon Evans and Norway’s Ezinne Okparaebo.

Similarly close tussles for World Indoor Tour points can be expected in several other events.

Two-time world indoor champion Pavel Maslak and Grenada’s Bralon Taplin are currently tied on points in the 400m standings after exchanging victories in Dusseldorf and Torun. Whoever finishes ahead of the other in Birmingham will, in theory, take the series win.

The situation in the men’s 1500m is similarly close as Kenyan duo Bethwell Birgen and Vincent Kibet are both within touching distance of the series victory. On Saturday they will line up alongside Australia's Ryan Gregson and USA's Ben Blankenship and Garrett Heath.

Jeff Henderson isn’t in contention to win the World Indoor Tour, but all eyes will be on the Olympic champion as he lines up for his first long jump competition of 2017. World silver medallist Fabrice Lapierre and 2008 Olympic silver medallist Godfrey Mokoena are currently tied at the top of the World Indoor Tour standings and so their primary concern in Birmingham won’t be on Henderson but on one another’s performance.

Another Olympic champion will be in action in the women’s pole vault. Ekaterini Stefanidi produced the best mark of 2017 so far with her 4.82m victory at the recent Millrose Games. Currently third in the World Indoor Tour standings, she will need to win in Birmingham and hope that event leader Nicole Buchler finishes outside the top three to land the US$20,000 series bonus.

Focus on Baker and Manning

It’s not just the World Indoor Tour disciplines that will provide the excitement in Birmingham.

Sprint hurdler Christina Manning has also put herself in the spotlight recently after speeding to a 7.82 win in Athlone on Wednesday. She will be joined in the 60m hurdles by US compatriots Sharika Nelvis, Jasmin Stowers and Jacquelin Coward, as well as Australia’s 2012 Olympic champion Sally Pearson, world bronze medallist Alina Talay and Sweden’s world indoor record-holder Susanna Kallur.

World bronze medallist Amel Tuka will be looking to upset the all USA-Britain party in the men’s 800m. USA’s Casimir Loxsom, who recently set a world indoor 600m best, and British indoor 800m champion Guy Learmonth will be tough to beat.

While some disciplines in Birmingham have a guaranteed – or close to it – World Indoor Tour winner, that won’t detract from the expected excitement.

Joanna Jozwik also had an unbeatable lead in her event, the 800m, but the Pole will still be in action in Birmingham and will take on a field that includes world bronze medallist Melissa Bishop and British indoor champion Shelayna Oskan-Clarke.

USA’s Erik Kynard returns to the scene of his 2.34m indoor high jump PB from 2014. The 2012 Olympic silver medallist faces world indoor silver medallist Robbie Grabarz and Donald Thomas, who is all but guaranteed the World Indoor Tour win.

Hungary’s Olympic bronze medallist Anita Marton goes into the shot put with a healthy lead in the points standings, but USA’s Jeneva Stevens should challenge her on the day. 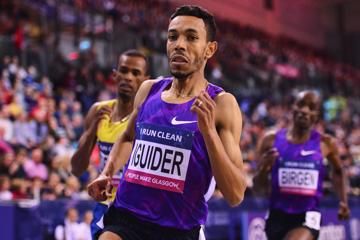 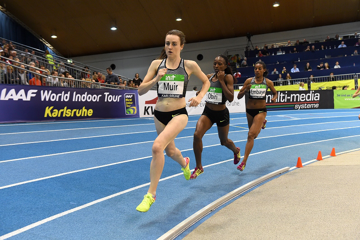 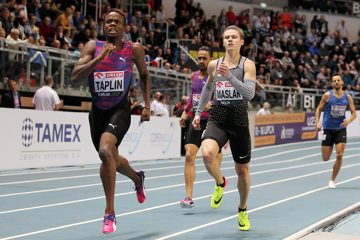