Fifteen events – six on the field and nine on the track – will take place on Sunday afternoon, featuring the main names of Brazilian athletics.

Coming from a couple of seasons plagued with injuries, Braz expects to start his 2019 outdoor campaign with a positive result, after vaulting 5.80m indoors. Braz, world ranked No.13 in the pole vault, has rejoined his former coach Élson Miranda de Souza and is coming from a stage of training in San Diego.

“We aren’t worried about how high he will go in this meet,” explained Miranda de Souza. “We will start with a 16-step approach and later in the season will switch to 18. The training in Chula Vista has gone very well. The facilities are wonderful and the weather was perfect. We didn’t miss any workouts and we feel very positive.”

After a season in which he won the Continental Cup and set five South American records, culminating with 22.00m, Romani was named Brazil’s best athlete of 2018. The 28-year-old, world ranked No.3 in the shot put, started this season with 21.83m in São Paulo and has higher goals.

“Last year was a very good one, but that only elevates my responsibilities,” he said. “To stay at the same level, or to improve, I must throw over 21m consistently and I hope to achieve that at the Diamond League meets, Pan-American Games and World Championships.”

The Hungarian, world ranked No.4 in the hammer, finished third overall in last year’s Hammer Throw Challenge and heads to Bragança Paulista as the slight favourite.

In the women’s discus, USA's world leader Valarie Allman, world ranked No.7 after throwing a lifetime best of 67.15m earlier this month, will take on world No.8 rank Fernanda Raquel Borges, third on the 2019 world list with 64.16m, and fellow Brazilian Andressa de Morais, world ranked No.3 and the South American record holder with 65.10m.

Aman, the 2013 world champion, will open his season in Brazil, aiming to regain his top form but faces a pair of strong Kenyans. Cornelius Tuwei, world ranked No.12, ran 1:43.82 last year and 1:47.71 indoors earlier this year. Compatriot Alfred Kipketer, world ranked No.22, was an Olympic finalist in 2016 and has a best of 1:42.87. Brazil’s world finalist Thiago Andre adds further class to the field.

BACK
Pages related to this articleAthletes
Thiago BRAZ 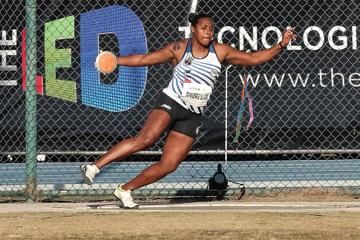