Halasz and Price triumph in Szombathely

Bence Halasz in action in the hammer in Szombathely (© Organisers)

European champion Wojciech Nowicki took an early lead in the men’s event, opening with 76.33m and improving to 77.51m in round two. Halasz, meanwhile, had a shaky start to the competition and only just made the cut to the top eight for the final three rounds.

In round four, though, things clicked for Halasz and he sent his hammer out to 78.54m. Nowicki had no response; the Pole completed a consistent series with all throws ranging between 75 and 78 metres, but didn’t improve on his second-round mark.

France’s Quentin Bigot placed third with his fifth-round effort of 76.83m while Norway’s Eidvind Henriksen was fourth with 76.13m.

With one competition left in the IAAF Hammer Throw Challenge – the IAAF World Athletics Championships Doha 2019 – Halasz consolidated his third place overall in the 2019 standings while Bigot and Henriksen moved up to fifth and sixth respectively.

DeAnna Price in action in the hammer in Szombathely

Price dominated the women’s competition to record her first victory in this year’s Hammer Throw Challenge.

Competing for the first time since extending the North American record to 78.24m when winning the US title last month, Price opened with 74.07m and followed it with 74.80m and 73.68m.

It wasn’t until round four when she was joined beyond the 70-metre line with France’s Alexandra Tavernier throwing 70.87m. The 2015 world bronze medallist improved to 71.33m before ending her series with 71.84m, but there was no catching Price, who rounded out the competition with 73.38m.

Price now moves to fourth, one place ahead of Tavernier, in the 2019 Hammer Throw Challenge standings.

BACK
Pages related to this articleAthletes
Bence HALÁSZ 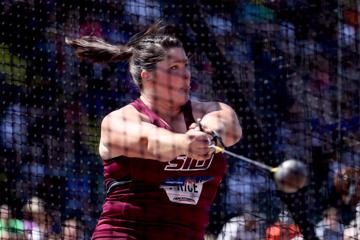