The last day of in-stadium athletics competition at the Rio 2016 Olympic Games provided a short programme but intense action which included a surprise 1500m winner and a double title defence.

Matthew Centrowitz scored arguably the biggest upset of the night when he claimed the 1500m Olympic gold medal in 3:50.00, the first for the USA in this event since 1908.

There was a lot of experience in the field which included the past two Olympic champions but Centrowitz’s game plan to lead from the gun eventually paid off. Leading a compact group through a modest 1:06.83 at 400m, the 26-year-old slowed the pace even more to hit the 800m mark in a pedestrian 2:16.59.

To his credit, no other man was brave enough to hit the front and the only move with 600 metres to go resulted in Ronald Kwemoi’s tumble. At the bell, Centrowitz was working hard to hold off 2008 champion Asbel Kiprop and 2012 winner Taoufik Makhloufi whose fight for the inside lane worked to the world indoor champion’s advantage.

Matthew Centrowitz wins the 1500m at the Rio 2016 Olympic Games

World champion and world leader Kiprop made his third and final move with 300 metres to go, but Centrowitz was having the race of his life; his last lap of 57.69 putting the final touch to his Olympic glory.

Makhloufi closed in second in 3:50.11 to secure his second silver medal of these Games while Nick Willis moved from sixth to third in the final stages to claim New Zealand’s fourth medal here in Rio. Kiprop faded to sixth.

Coming into these Games, Caster Semenya was one of the safest bets for a gold medal. The 2009 world champion from South Africa not only lived up to pre-Games expectation, she also improved on her personal best and national record to become her country’s first Olympic champion at the distance.

The 25-year-old bode her time to perfection and kept her composure as world indoor champion Francine Niyonsaba decided to take her chance, going through the bell in 57.59.

Caster Semenya wins the 800m at the Rio 2016 Olympic Games

It wasn’t until the last bend that Semenya made a move of her own and she let her natural speed do the talking. An unofficial 28.5 last 200m saw her cross the line unchallenged in 1:55.28, a time which would have won all but three editions of the Olympic Games.

"The race was a little bit quick,” Semenya said. “The first 400m, we pushed ourselves. My coach told me to be patient and wait for the right moment. We know we are quicker in the last 200m."

Niyonsaba’s silver is Burundi’s first medal since Venuste Nyongabo’s 1996 gold and their first ever by a woman.

Usain Bolt entered the history books last night by achieving an Olympic treble treble; Mo Farah left his own piece of Olympic legacy as he completed a double double tonight.

Having successfully defended his 10,000m title in outstanding fashion earlier this week, Farah had to work just a little bit harder to secure the 5000m gold in 13:03.30.

After sitting at the end of the pack, Farah moved to the front with four-and-a-half laps to go. He was determined he would not relinquish his position on the inside and worked hard to respond to the attacks coming right left and centre.

Farah, who also has five world titles to his name, tried to unleash his traditional final kick at the bell but he wasn’t making enough ground for his move to prove decisive. It eventually came down to a final sprint in the home straight which saw Farah reign supreme once again.

It was no coincidence that the last man who was seen chatting with Farah before he entered the Olympic stadium was none other than Bolt. The Jamaican, who shares the same agent with Farah, had just been presented with his third gold medal from these Games before he stopped to take the oh-so-important selfie and share a few words with Farah.

Not that the Briton needed any advice on how to win an Olympic gold medal.

With three European outdoor titles and one European indoor gold, Ruth Beitia stands as one of the most decorated high jumpers of the old continent. She hasn’t had the same kind of pedigree on the global stage – up until tonight.

In a final that contained 17 athletes, the opening height was set at a demanding 1.88m. With the bar then raised by five centimetres, it would prove crucial to make as few mistakes as possible. Beitia was the only woman to make no mistakes up until 1.97m, a height cleared by four others tonight, and eventually that would secure her the gold medal.

After a 20-year international career, and some 13 years after making her first World Championships final, Beitia is Spain’s first woman to win an Olympic gold medal in athletics.

After finishing outside the medals at the IAAF World Championships last year in Beijing, Thomas Rohler learnt his lesson.

Coming into the Olympics as the best performer of the year, the German knew that he couldn’t underperform if he wanted to become his country’s third Olympic champion in the men’s javelin.

The 24-year-old German seemed to be struggling to find the form which has seen him break 91 metres this year and was trailing in second behind world champion Julius Yego. The Kenyan’s 88.24m opening effort, his only valid throw of the night, stood in pole position for much of the evening.

Thomas Rohler, winner of the javelin at the Rio 2016 Olympic Games

But round five saw the order of the medallists reversed as Rohler’s javelin flew in the air and landed beyond the 90-metre tape. The scoreboard flashed 90.30m, the second-best performance in Olympic history and just 27 centimetres off Andreas Thorkildsen’s Olympic record from 2008.

"I think after this year and after last year, we all knew that it's going to be a competition on a really high level,” said Rohler. "It's just awesome. I’m super happy. My family is super proud.”

Suffering from what looked to be a knee injury, Yego would not take his last throws but still made history for his country as the first Kenyan ever to win an Olympic medal in a throwing event.

The last races on the track

As tradition has it, the last races on tonight’s athletics programme were the women’s and men’s 4x400m relays. Both helped to extend the USA’s lead on the medal table.

Individual silver medallist Allyson Felix was on anchor duty tonight and the USA needed all of Felix’s experience and composure to hold off the challenge of the Jamaican quartet, whose anchor leg Novlene Williams-Mills had already upset them at last year’s World Championships.

Felix set the record straight on a night which saw her win her ninth Olympic medal and sixth gold.

The men’s race proved a hotly contested head to head between the USA and Botswana until Gaone Maotoanong dramatically faded with 50 metres to go. With the US cruising to gold in a season’s best of 2:57.30, the African champions were gradually overtaken by Jamaica, The Bahamas and Belgium.

In an extremely close battle for the minor medals in which only 36 hundredths separated silver from fourth, Jamaica prevailed over The Bahamas. There were national records for Belgium in fourth and Botswana in fifth.

Three world records, eight Olympic records and 10 area records have been set so far in Rio for what has proved to be a fantastic Olympic Games.

It may be the end of action at the Olympic stadium, but there is still one event to go in the athletics programme: the men’s marathon, which will be held in Sanbodromo, kicks off at 9:30am tomorrow morning. 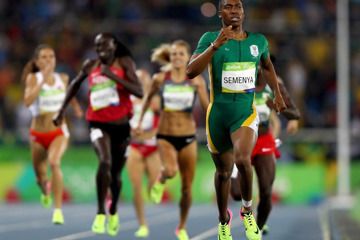 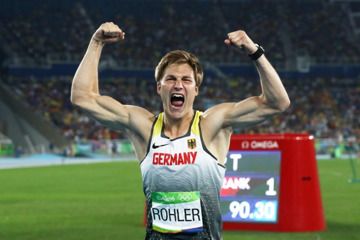 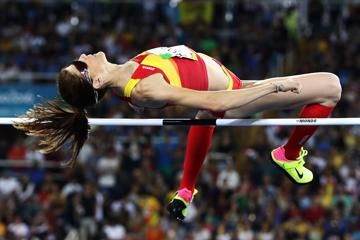 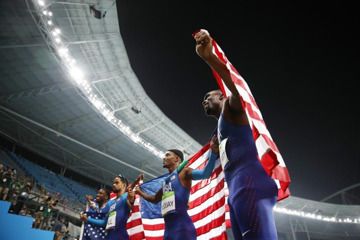